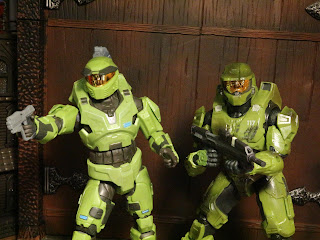 Earlier this month when I released the list of my Top 10 Toylines of 2021 I included Halo: The Spartan Collection from Jazwares/ Wicked Cool Toys despite neglecting to review any of them last year. I picked them up near the end of the year and while they were very cool and look great on display, by the time I had most of them in hand there were too many newer things to review so I skipped them. Today, though, I'm checking out a set that was just released: The GameStop exclusive 20 Years of Master Chief set. Including a figure of Master Chief from 2001's Halo: Combat Evolved and a figure of Master Chief from 2022's Halo Infinite, this set definitely seems pretty desirable to fans of Halo and the Chief. The Halo: CE Chief is scheduled to come out in an upcoming series of figures and the Infinite version of Chief has appeared quite a few times in the line already, but they're available right now as a GameStop exclusive. Before Christmas I started playing through all of the Halo games and now I'm currently in the middle of Halo Infinite. I had a lot of great memories of replaying through most of them (I somehow skipped Reach and Halo 5: Guardians the first time around) and it's been fun to see how the series has evolved. I've never been a big Halo collector but I did have the Joyride studios Master Chief, camouflaged Master Chief, and a Warthhog back in the day and I also had a McFarlane Cortana. The Spartan Collection has been quite fun so far and I like the scale and the style so this set really appealed to me, especially due to the Halo: Combat Evolved Master Chief figure. Let's jump in and check out the good and the bad after the break... 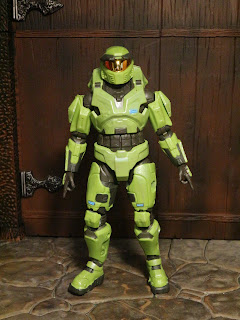 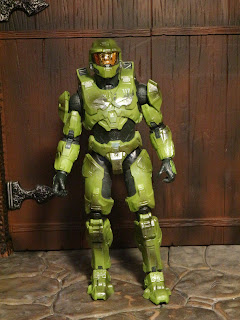 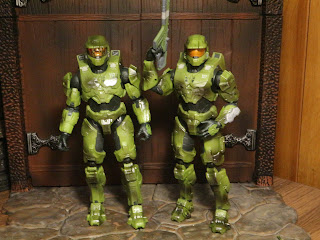 Comparison:
* Here's a quick shot of the Halo: Infinite Master Chief  in this set (left) next to the series 3 version (right). This guy is pretty similar to that release but seems to be almost exactly the same as the earlier releases from series 1 and 2 where Master Chief had a shiny visor and no grappling hook on his arm. The paint work is a bit different as well with a bit more battle damage on the chest. 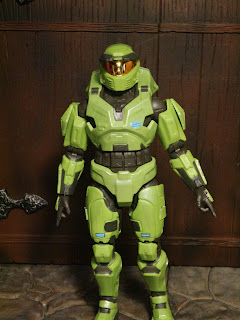 The Positives:
* Let's start out by checking out the Halo: Combat Evolved Master Chief, as he's the reason I bought this set. I loved Combat Evolved back in the day. While the X-Box came out in Fall 2001 (my senior year of high school) I didn't end up getting one until Summer 2003 after my Freshman year of college. During that year I spent endless hours playing Halo multiplayer in my dormitory with a network of 3-4 X-Boxes for some truly epic battles. This is a pretty solid looking Master Chief and while the green might be a bit too light, it's tough to separate what the character actually looks like from how you see him in your mind. Looking at the box art and such I think Jazwares/ WCT did a pretty solid job. The sculpt is sharp though there's definitely something that makes this "feel" like an old school Chief. 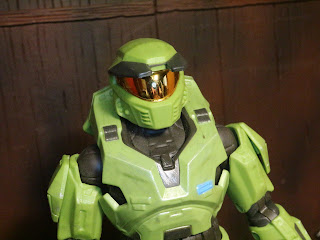 * The helmet is excellent. I love the shiny visor and the armored brim of his helmet. He's got lots of armor around his shoulders, too. Master Chief is pretty much the face of Microsoft's X-Box series of consoles and while he's evolved in the past 20 some years, he still looks pretty recognizable even in his earliest appearance. 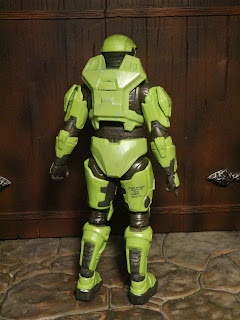 * Flip Master Chief around and you can see his detailed armor sculpt extends all over his back. There's a little bit of dry brushing on his armor to give him that rugged, battle worn look, but it's not overdone. 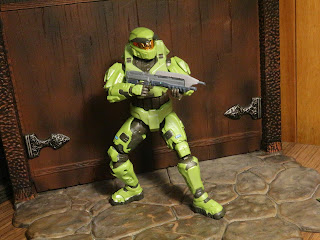 * While I've overall enjoyed the articulation on most of the Spartan Collection figures, this version of Chief has a lot of faults. At it's core, however, the articulation is fairly in line with modern standards for a mass market release, especially considering this is a guy in a big, bulky suit of armor. The arms are pretty mobile, as are the hips and ankles. He's a durable figure and you shouldn't have to work about breakage or anything. I'll get to the faults in the articulation in a minute, however. 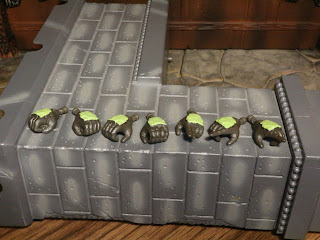 * One of the nice things about this line is that the figures all come with plenty of extra hands. This version of John-117 comes with seven hands: A pair of fists, a pair of grips,  pair of trigger fingers, and a gesturing left hand. The hands swap out easily and do give you plenty of options for posing and display, so that's a plus. 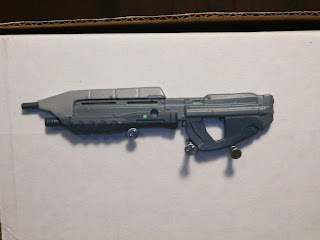 * Master Chief comes with two weapons from Combat Evolved, the first of which is the Assault Rifle, or more precisely the MA5B Individual Combat Weapons System. This is a pretty nice sculpt and there are multiple paint applications on it, so you'll want to keep it around. You know, unlike in the game where it tends to get ditched pretty quickly due to having little to no range. 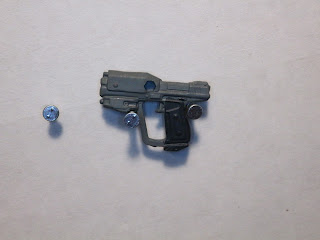 * The second weapon is the M6D Personal defense Weapon System, also known as the pistol with incredible power and zoom. The pistol is incredibly powerful in Halo: CE and probably the best weapon in the game. It's so powerful that they basically removed it from future games. This is a cool looking pistol that again has a nice amount of sculpted detail and some paint applications on the body. 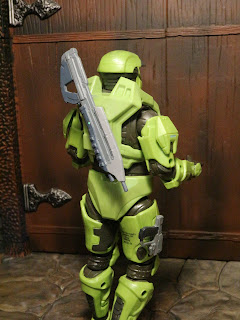 * The Spartan Collection figures typically have removable panels on the thighs and on the back which allow the figure to tote around a few weapons. You remove the panel and flip it around to reveal a peg. The pegs are fairly long and the holes in the guns are kind of small but you can typically make it work. Just make sure you have the panels back in tight or you might lose them. The Halo: CE Master Chief can hold his rifle on his back easily while his pistol is at his hip and ready for action. 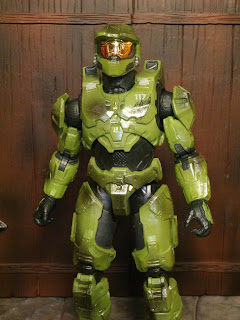 * Let's teleport to the future and check out the Halo Infinite version of Spartan John-117. This looks like a much more modern figure with sharper, crisper details and more paint detail on his armor. This guy is definitely a repaint as the figure has been released in some form in every series in the Spartan Collection so far but if this is your first one, you should be satisficed. This version does not have the grappling hook on his left forearm, so take note of that if that's something you're really wanting. 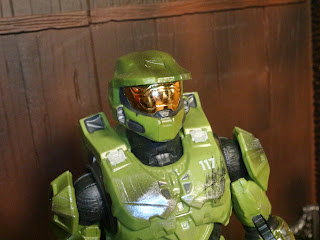 * The helmet is excellent. I love the detail and shininess of the visor here. It's much sleeker and more refined than the Halo: CE version and it's far more mobile, too. 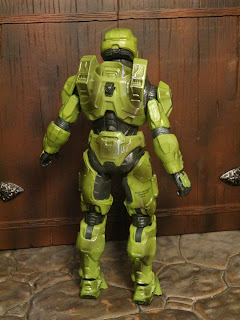 * Flip John around and you can check out all of his armor and thrusters. There's a fair amount of wear and tear on his armor (it's all paint) so he definitely looks like he's been through plenty of encounters with the Banished. 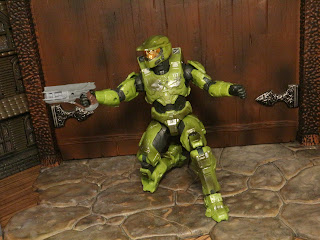 * The articulation on the Infinite Master Chief is much better than the CE edition and is much closer to the articulation model of most other figures in the line. This is still a sculpt from the first series, so it lacks the "butterfly" hinges and abdominal movement of the newer figures, but overall it's still pretty well articulated and quite sturdy, too. Someone in a bulky suit will always have an impeded range of motion after all. 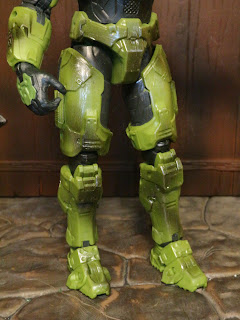 * Chief's boots are pretty cool looking, too. Even with the hinged toes and the swivel/hinge ankles, the boots still look fantastic with a lot of detail on them. He's seriously armored up. 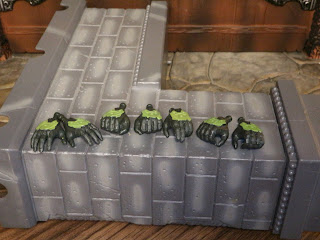 * This version of Master Chief also comes with seven interchangeable hands. You've got a pair of open palms, a pair of fists, a pair of standard grips, and a gesturing left hand. Oddly enough, he doesn't have standard pistol grip hands, but the standard grips work pretty well with the included weapons. 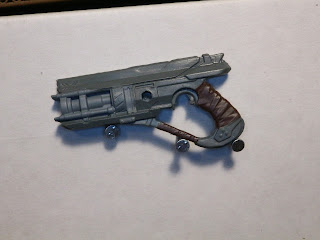 * This version of Master Chief comes with two weapons from Halo Infinite, the first of which is the Disruptor. This is a small, automatic handgun that fires electrical bolts which can be used for offense or to bring vehicles to a stop. It's one of the new weapons for this installment of the franchise so it's neat to see it here, though the weapon has shown up in the line already multiple times. 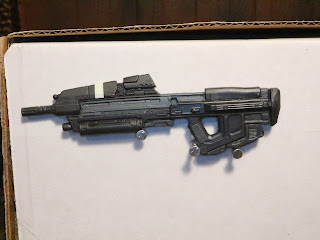 * Chief's second weapon is the MA40 assault rifle, a 36 round assault rifle that's pretty useful in up close combat. It doesn't have the magazine size of some of its predecessors but it handles better. The sculpt is sharp here and, again, there are quite a few paint applications on the weapon. 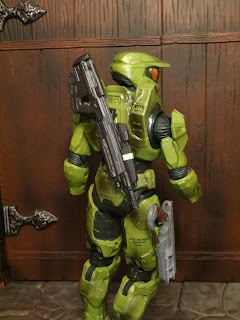 * Like the rest of the figures in the line, this version of Master Chief has pop out panels on his hips and one on his back to allow him to tote around his weapons. The MA40 fits perfectly on his back and the Disruptor can pop right onto his right hip. 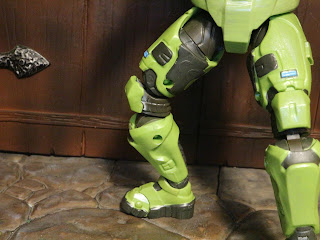 The Negatives:
* I've got a few problems with the Halo: Combat Evolved Master Chief and the biggest is probably his knees. See the knee bend here? That's it. Seriously, a double jointed knee and that's all the range of motion you get. Besides looking weird, that range of motion is pathetic. 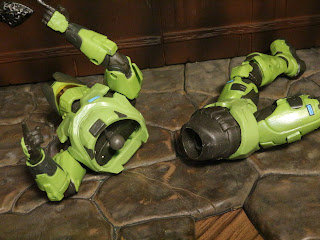 * No, Chief isn't broken. But if you move his torso balljoint just a bit he'll pop apart. Why's that? The midsection with the pouches is a separate piece over the socket and it really seems to hinder the movement. Honestly, he's pretty solid around the torso with little movement except for some wiggle room. What a shame to have a nice true ball and socket and then restrict it so much. 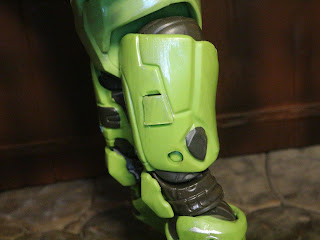 * The panels on the side of Master's Chief's legs really stick out. Most of them are well hidden or are tied in with the armor but these ones look like they just don't fit right. 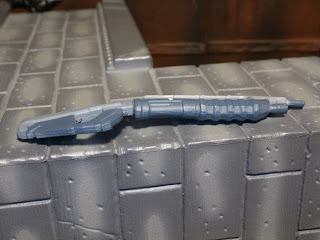 * While most of the weapons in this series are pliable, Master Chief's MA5B is straight up gummy. This thing is outright bendable. That's a disappointment for sure. 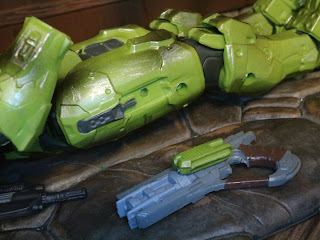 * The Halo Infinite Master Chief is quite a bit better and my only complaint about him is that the side panels for holding his weapons pop out really easily. There's no room for the piece to grip into his hip. 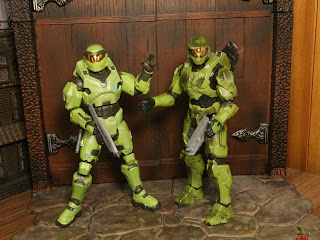 Considering that you're getting two 7 inch, fairly articulated figures for $40 bucks, it's tough to be too hard on this set. If you find a good pose, both figures look quite cool on the shelf and definitely do give off a cool vibe of the evolution of the Master Chief design. The Halo: Combat Evolved Chief is definitely the weaker of the two with some pretty uneven articulation and a rubbery rifle. The Infinite version, if you don't already have it, is definitely the better figure of the two. He's quite impressive and really fun. These aren't high end figures or anything but for $40 bucks the 20 Years of Master Chief set (probably less if you catch one of GameStop's many sales) isn't a bad deal at all. It's fun to have both of these guys on the shelf. Jazwares/ WCT has put out a ton of Spartans, now, so hopefully we'll soon get some Covenant and Cortana soon.
If you're a fan of Master Chief/ Spartan John-117, I've also reviewed the micro Master Chief that came with the McFarlane Toys Halo 4 Cortana.
Posted by Barbecue17 at 2/22/2022