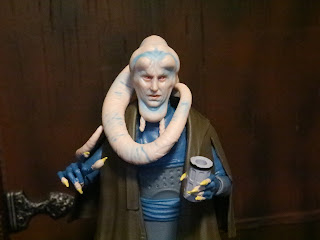 It's been a few months since a new series of Star Wars: The Black Series figures hit shelves and today I'm checking out the first of four figures I was able to get my hands on: Bib Fortuna. I picked these up when Hasbro put them on sale at the beginning of January and while I didn't purchase everyone (there were a couple I skipped and a couple I missed) I did manage to grab all of the Original Trilogy figures. Bib Fortuna is definitely another of those figures that I'm shocked it took us 8 1/2 years to get. Isn't it crazy that the Black Series has now been around longer than the vintage Kenner line lasted in stores? Anyways, it's funny that we just got Bib Fortuna considering he was killed off pretty quickly in the teaser for the Book of Boba Fett during the season 2 finale of The Mandalorian. Bib Fortuna hasn't played a huge role in the Book of Boba Fett, either, even in the flashbacks, so this guy is sold on the strength of his OT appearance, though he did appear in Episode I and the Clone Wars. Let's take a look at the infinitely quotable Bib Fortuna (is there ever a time when it's not utterly fitting to say "die wanna wanga?") after the break... 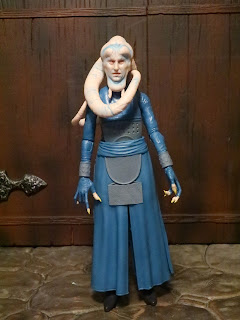 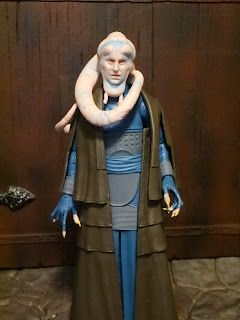 * Hasbro typically does a pretty nice job capturing armored and non-human characters so Bob Fortuna's sculpt is quite impressive, as you might expect. Jabba the Hutt's majordomo is outfitted in fancy blue robes with some unusual armored bits worn underneath a longer decorative robe. The robe is a separate piece that can be removed. It fits the figure well, allows for plenty of room for the articulation you might want from Bib Fortuna (he can stand around and make expressive poses, though if you want him to do Teras Kasi you might have trouble). 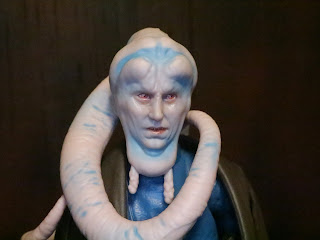 * The portrait has an excellent likeness of Bib Fortuna from Return of the Jedi. He creeped me out as a kid as I had a book and record set of ROTJ and Bib Fortuna's creepy face was in there. Hasbro went with a fairly neutral face here for Bib and it works, though I would have maybe liked to have seen his creepy smile and teeth better. The large waddles or what ever they're called hanging off of his neck are pretty prominent and noticeable, too. 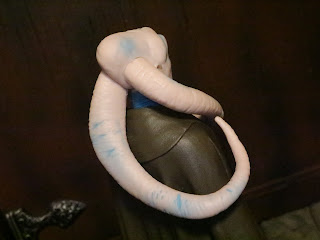 * Bib Fortuna's leukku are pretty large and they wrap around his shoulders and torso accurately to the film. There's a lot of detail, too, and some of it is further brought out by a blue wash to add a bit more texture to his skin. 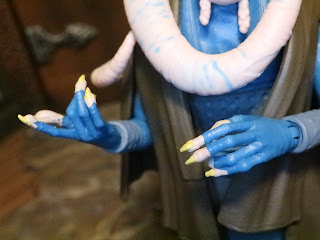 * Bib Fortuna has really long, slender fingers with long yellow nails. They're wonderfully eerie and expressive here. Since he doesn't come with any weapons these definitely help add some menace to him on your shelf when displaying him alongside of Jabba the Hutt. 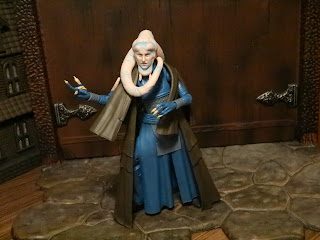 * I kind of went over this earlier but Bib Fortuna does have quite good articulation. He has pretty much every joint you'd expect from a Black Series figure and most of it is functional. Yeah, his cloak and robe do impede his movement a bit, but not enough that it detracts from the figure. Bib's not doing high kicks or anything. There are also well thought out cuts on the sides of his blue robe so you can put him in wider stances if you want to. 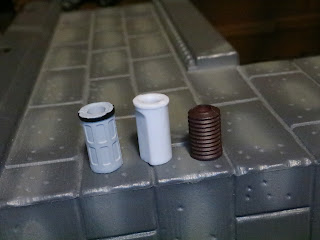 * Bib Fortuna doesn't come with the staff that his vintage Kenner figure did, the blaster of his Power of the Force 2 figure, or the dagger of his Saga Collection release. Instead he comes with three glasses. They are cool and nicely sculpted. They're also hollow, so they look like they could hold liquid. They're a weird choice for Bib Fortuna, though. I'm OK with a non screen accurate accessory if there isn't anything better and I'm not sure the cups are better. Still, they are kind of neat in their own weird way. I guess Cantina patrons or other denizens of Jabba's Palace (if we ever get any) could use them. 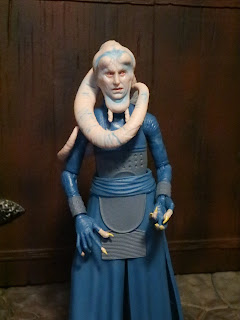 * Bib Fortuna's robes are removable but doing so really shows off that there are some weird proportions with the sculpt, especially in the arms. You can also see a bit more that the metal bits of his robe look flatter and plainer than they should with no shininess to them. They're supposed to be metallic and a bit more elaborate. 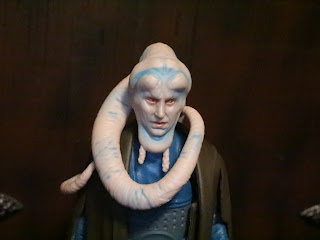 * It's a good idea to give Bib Fortuna's portrait and lekku a wash to bring out some detail but I think there's way too much blue here. It almost looks like he's been hanging out with Dr. Tobias Funke too much. The blue on his forehead is definitely overdone. 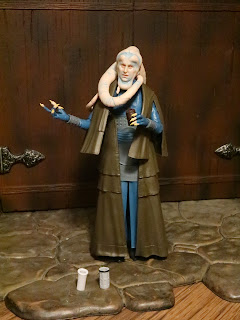 I really thought Bib Fortuna was going to be a knock out figure in this wave but getting him in hand I'm a little disappointed. He's still pretty solid and there's nothing that's too overtly bad about him or anything; I'm just disappointed with the little things like the overdone blue on his head, the lack of detail on the embellishments on his robes, and his lack of any weapon. I'm all for Hasbro making media accurate figures and we don't need a return to the days of Han Solo with Smuggler Flight Pack, but I'm A-OK with including an extra accessory. A little dagger and/ or a blaster hidden under Bib Fortuna's robes would have been royally cool. The guy surely carries something to defend himself and Jabba when something goes down, right? A little bit of creativity there would have been very welcome, as would have the inclusion of the vintage staff (which Bib was carrying in the BoBF teaser). He's a Good and a 1/2 figure but leaves me wanting just a bit more.