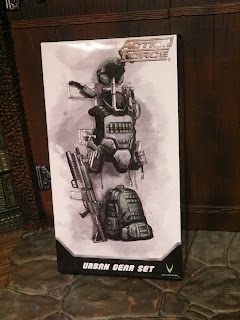 A couple days ago I reviewed the Urban Combat Republic Guard from Action Force. Referred to as a "basic" figure, the Republic Guard is a pretty bare bones release with no armor, weapons, or gear. Designed for troop building or customizing, the idea is that you'll pick up other accessory sets to build those figures up. Today I'm going to check out one of those accessory sets: The Urban Gear Set. Arriving in a simple cardboard box with an artist's rendering of the contents on the front, the Urban Gear Set can be used to equip one of the basic Action Force figures, change the gear for one of the "Core" figures (the named characters in the line), or you can use it with some other 1/12 scale action figure lines. It's a cool concept and something that you really just don't see in retail lines these days (except for Final Faction, because that $1.25 line somehow manages to get things right that most other companies don't) but since Valaverse is running a collector focused line catering to customizers and army builders, they're aware of what those demographics want. Let's take a look at the Urban Gear Set after the break... 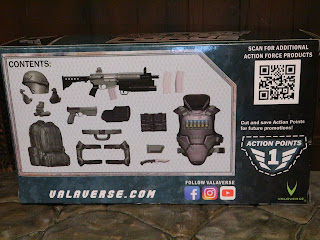 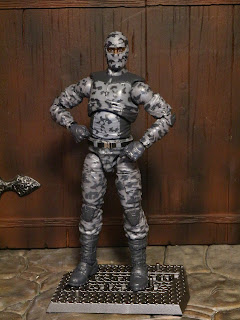 * Modeling this set today is the Urban Combat Republic Guard figure from Action Force. He's one of the basic figures in the line and since he's already decked out in urban camo, he seems a perfect match for the Urban Gear Set. 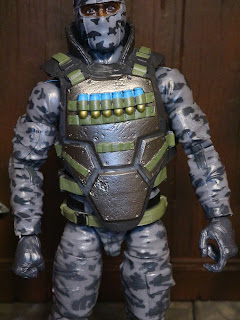 * The body armor included with this set is really cool. It also came with the Bone Collector but here it's colored differently with a dark gray base, green straps, and blue and gold grenades stored across the chest. There's a lot of detail here, particularly on the armored places, so you can tell that this guy (or at least this piece of armor) has seen quite a few fights. 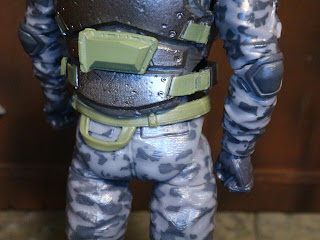 * Take notice of the green belt around the waist. This is a separate piece that you have to slide over the legs of the figure. It's a real pain but it looks cool and gives the figure a bit more detail. There's also a loop at the back which can be used for storing an extra piece of equipment. 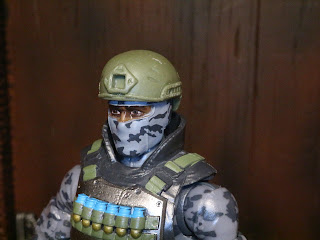 * To protect the head of your trooper you get a cool tactical helmet. This is a sleek, sporty, modern combat helmet that fits over the heads of most figures in the line quite well. 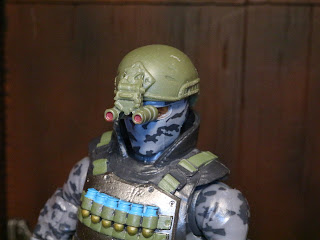 * The helmet has lots of little extras with it, most impressively these cool night vision goggles. They just plug in to the front of the helmet. They even have red lenses! How cool is that? 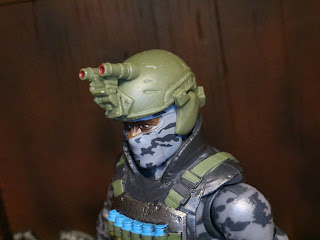 * You can further customize the helmet by putting the night vision goggles up on top (just rotate the piece before putting it in) and by adding the armored ear pieces. They take a little work to push in but they stay on nicely and give the helmet a fuller look. 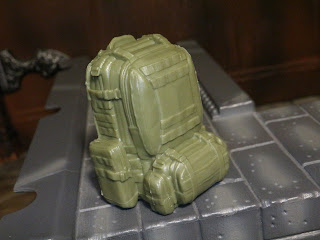 * There's also a backpack included here. It's solid green with no paint applications but the detail work on this is nice. Lots of pouches and straps and such. The peg is really long on the back so it stays in the back of a figure quite nicely, even if they're wearing a vest or armor. 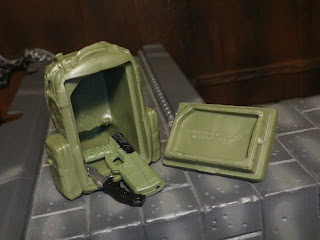 * The backpack also "opens" with a removable panel on the back. It pops off (but stays on securely due to simple friction) and you can put a couple pieces of gear in here. You could store some weapons, extra magazines, or even an extra set of hands. That's pretty slick and a cool little feature. 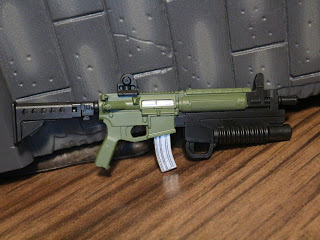 * This weapon has been included with a few figures now as well as the Prototype Armaments set but this might be the best version yet. This seems to be an HK416 with an under the barrel 40mm grenade launcher with a cool green body, black attachments, and a silver magazine. It looks awesome and is a pretty impressive piece. 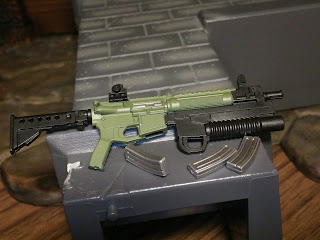 * Like the other versions of this rifle in the line, this one not only has a removable magazine but it comes with two additional magazines as well. The magazines stay securely in the weapon and look great on their own. 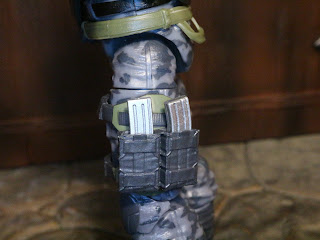 * A thigh pouch is included that can hold both spare magazines securely while keeping them at the ready. 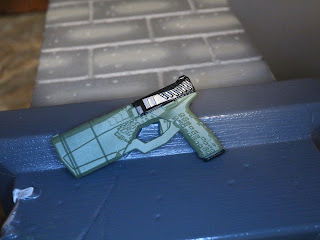 * The Steel Brigade trooper also included this really cool and modern looking pistol. The grip looks like a pretty standard modern pistol but the front seems rather advanced. Maybe it has a built in suppressor or recoil reducer or something? The barrel is hollow, so you can put an effect piece inside. There's also a paint application on the slide and on the magazine at the bottom. 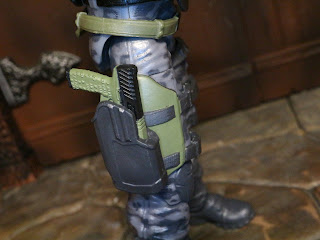 * The pistol fits nicely into a standard drop in holster that fits a figure's right hip. It looks great and has quite a few paint applications which match the pistol and the rest of the gear in the set. 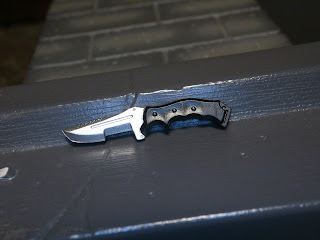 * There's also this small knife. The Steel Brigade come with the same accessory and it's a great little blade, so no complaints here. 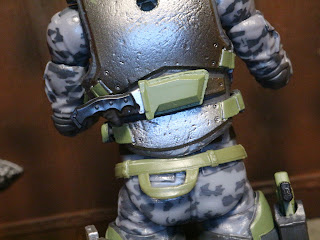 * There's a sheathe on the back of the armor so the knife can slide right inside, ready for battle. Or whittling. I guess whatever you're in the mood for. 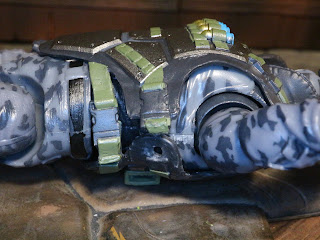 * Good grief was it tough to get the top peg snapped closed on the body armor. The lower belt was fine but the upper belt gave me a real problem. Even after getting it in it kept wanting to pop out. It feels like the upper strap needs to be just a little bit longer. 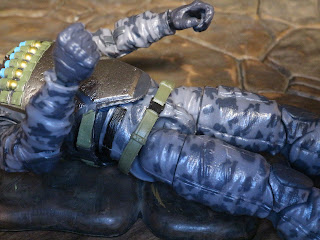 * Getting the belt on was a real pain, too. It's really tough to slide it over the thighs. I had to use a hairdryer to loosen it up a bit and there's no way I'm taking it back off. If there's an easier way to put the belt on it would have been nice to have some directions in the package or something. 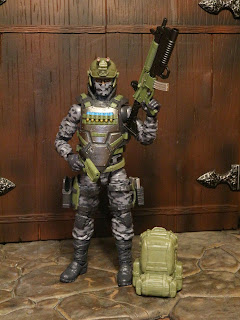 The Urban Gear Set is really cool and the weapons included definitely have the best paintjobs I've seen in the line so far. There's a lot of cool gear here and for the price you're getting a nice amount of stuff. It's a Great 1/2 set with a variety of useful pieces to fully gear up one of the basic figures or for using to augment other lines. I did find getting the armor and belt on my figure a little frustrating, though, but depending on what figure you're using you may not have the same complaints. I've always been of the opinion that accessories make the figure (they're usually my favorite part of most action figures, to be honest) and it's really cool to get so many solid one set for a pretty reasonable price. If you're simply supplementing some figures you already have, you might be able to change the look or equip two or three other figures with the gear here depending on what you're doing, which is pretty cool. I'm excited to see more of the cool stuff Valaverse releases to supplement Action Force and other releases in the future due to the quality of this set.
For more Action Force gear I've also checked out the Prototype Armaments set.
For more Action Force reviews check out the following:
The Bone Collector
Kerak
Prototype Armaments
Sgt. Slaughter
Steel Brigade
Urban Combat Republic Guard
Posted by Barbecue17 at 2/17/2022