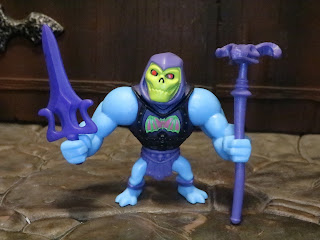 I reviewed the Masters of the Universe Eternia Minis Battle Armor He-Man last month and I'm just finally getting around to reviewing his counterpart, Battle Armor Skeletor. Mattel showed off the third series of Eternia Minis last year at Power-Con but now that they've showed up in stores we're getting a  different assortment of figures that are missing the cool Slime Pit themed cases that they were originally shown with. Battle Armor Skeletor is another "re-do" of one of the figures from the 2014 MattyCollector exclusive Masters of the Universe minis line. The first two series of the Eternia Minis came "blindboxed" in plastic cases although they did have a code identifying the figure inside so you could make sure not to get duplicates. Now they're sold on little mini blister cards so you can pick exactly who you want (if you can find them). Let's take a look at Battle Armor Skeletor after the break... 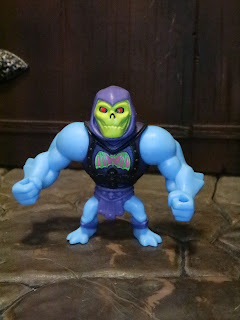 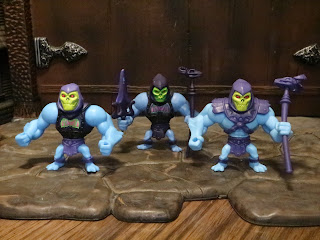 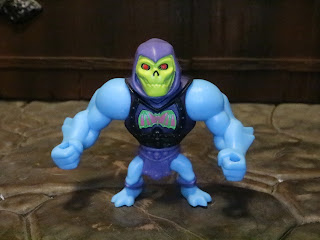 * Overall, I do like the sculpt and design of these. Skeletor does have a nice amount of detail on his Battle Armor and on the emblem on his chest. The print is quite neat and clean. It's a great looking minifigure for the most part. 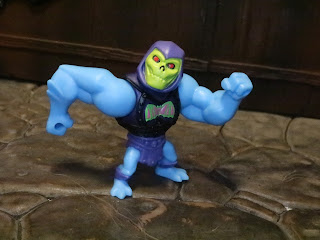 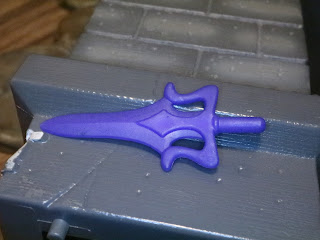 * Skeletor comes with a purple Power Sword just like the vintage toy did. It's a nicely sculpted extra with a lot of character. 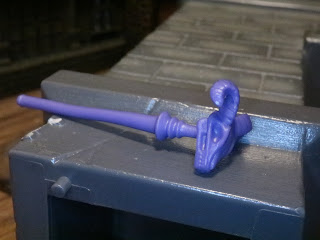 * Skeletor also comes with his classic Havoc Staff. It's miniaturized (just like him) and has a pretty decent sculpt for the skull as well. 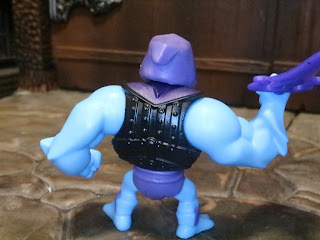 * The MOTU Minis Skeletor has the purple and black paint scheme on the back of his armor but here it's just straight up molded in black. That's kind of a bummer because I've always found the detail of the back of the armor to be quite cool. 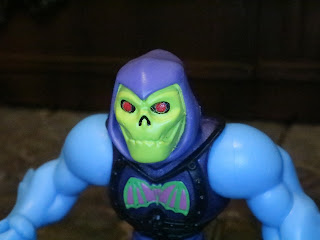 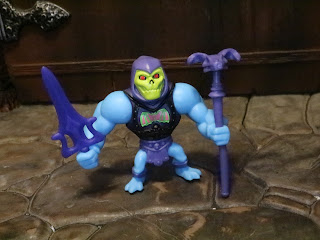 Despite getting two weapons with this guy I have to admit that I'm not feeling him that much. He's a big step down from the previously released MOTU Mini Battle Armor Skeletor. He's got fewer paint applications, an inferior headsculpt, and now you don't even get the cool clam shell cases that the first two series of Eternia Minis came with. I mean, for $5 bucks he's not terrible or anything, but there's better mini Battle Armor Skeletors out there so just pick one of those up. This one's an Eh and a 1/2. Not terribly but not thrilling, either.
I've reviewed so many toys of Skeletor/ Keldor that he has his own review archive. Check out Snake Mountain for all of my reviews of Skeletor!
For more Masters of the Universe Eternia Minis check out the following:
Battle Armor He-Man
Beast Man
Buzz-Off
Faker
First Appearance Trap Jaw
Golden Armor Skeletor
He-Man
He-Man (Series 2)
Horde Zombie He-Man
Jitsu
Man-At-Arms
Ram Man
Serpent Claw Man-At-Arms
Skeletor
Skeletor (Series 2)
Slime Pit Multipack
Stinkor
Trap Jaw