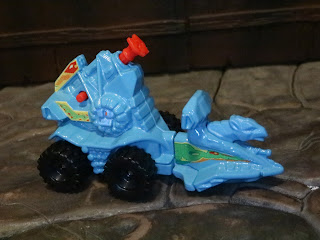 Mattel has released two extremely well done Masters of the Universe vehicles in the Hot Wheels Premium so far and I'll go ahead and say that the third release is also spectacular: The Battle Ram! The Battle Ram is a pretty iconic vehicle for MOTU and Mattel's miniature, diecast metal version of this Eternian siege weapon is a fitting tribute. Let's take a look at the Battle Ram after the break... 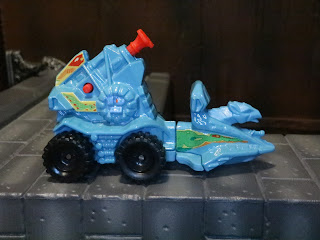 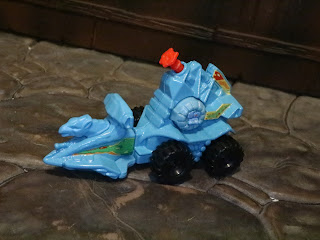 * The Battle Ram is such a unique looking vehicle and Mattel did a really nice job of capturing the very severe and angular appearance of the vehicle. The blue color seems a bit lighter in pictures but it's quite nice and looks great in person. I'm also a big fan of the colorful printing on the sides. There's a lot of detail and character here for such a small vehicle. 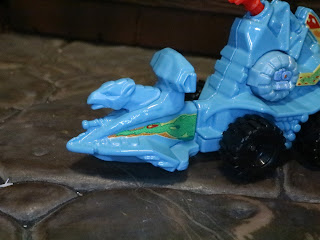 * The front of the Battle Ram (the Sky Sled part) is a seat for a character (not that one is included) to drive the vehicle. The headpiece of the Sky Sled looks great and the cannon on the front is clearly visible. 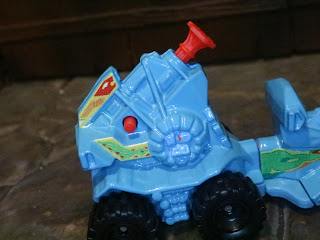 * The launcher is also nicely detailed and has the fantastic, colorful "labels" on the sides. This thing looks awesome. I even like the nonfunctional button for "launching" the non-firing missile. 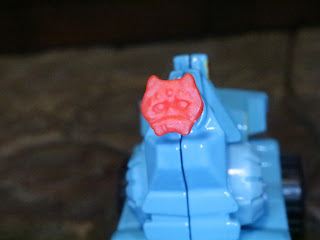 * The missile even has one of the funny little gargoyle heads on the front, just like the vintage toy. 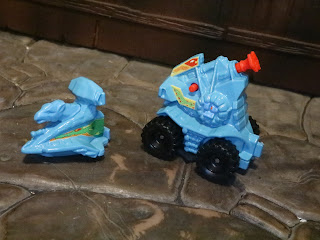 * Best of all, though, is the ability to split the Battle Ram into the Sky Sled and the launcher. It's pretty cool that Mattel fit this functionality into such a small toy! 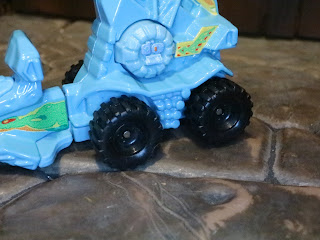 The Negatives:
* The Battle Ram has actual rubber tires which is a really cool feature except when you remember that the vintage Battle Ram had some seriously nasty looking armored tires. These seem a but too pedestrian for the Battle Ram, don't you think? 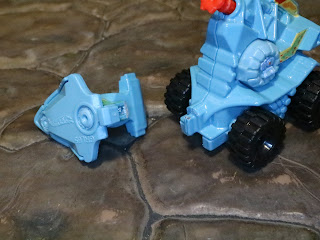 * The two vehicles of the Battle Ram stay together well but it's a but difficult getting them apart and putting them back together. It's a metal piece, so I don't think it's going to break, but it seems to require more force than I would expect to separate the Sky Sled and reattach it. 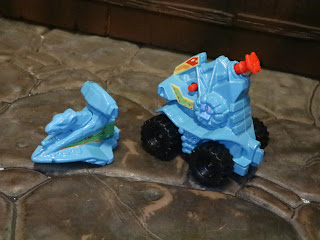 The Battle Ram is a really cool little vehicle. It's a solid vehicle and while I still think the price on these Hot Wheels Premium releases is too much (is this really worth 5x the price of a standard Hot Wheels car?) there's no doubt that Mattel is doing a nice job with these. It's much cooler than just painting Stinkor on the side of a van or something. This is a Good and a 1/2 depiction of the Battle Ram and it makes for a cool little item to display on its own, with other MOTU Hot Wheels products, or you can pretend that it's a model Prince Adam has on display in his room!
If you're a fan of the Battle Ram and Sky Sled I've also reviewed the vintage Battle Ram which had the Sky Sled as a detachable piece, the Mega Construx Battle Ram, the Sky High & Jet Sled set from Masters of the Universe Classics, and the Prince Adam & Sky Sled set from Masters of the Universe Origins.
For more Hot Wheels Premium releases check out the following:
Land Shark
Wind Raider