Jeopardizing June: Anti-Eternia Teela from Masters of the Universe Minis by Mattel 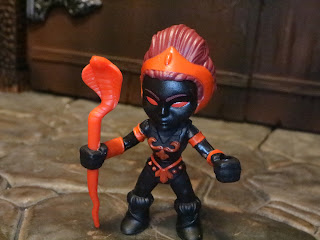 For June 2021's themed Masters of the Universe series of reviews I'm trying something a bit different: The theme is a mystery and you have to guess what the subjects of the reviews have in common! Check out all the details and how to enter the contest for a prize package here.
Can you believe that there are two figures in the recent third series of Masters of the Universe Eternia Minis that meet the mystery them for Jeopardizing June? Seriously, pretty crazy stuff. Anyways, today I'm looking at another Anti-Eternia repaint but this time it's Teela. Teela was available in her classic look earlier this year in the Slime Pit Multipack but now we've got the evil version of her from the World of Darkness. Let's take a look at her after the break... 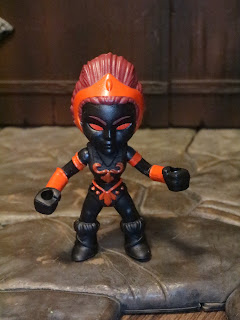 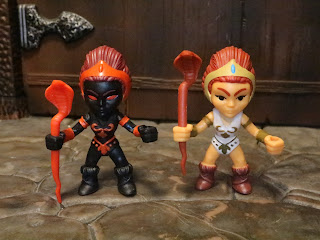 Comparison:
* On the left is Anti-Eternia Teela while the standard Teela is on the left. This is just a simple repaint but it looks quite striking and definitely feels like a different figure for sure. 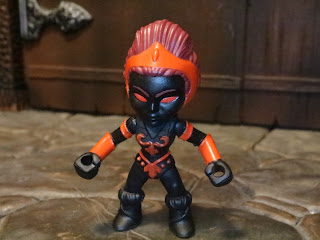 The Positives:
* The black and red color scheme on Teela really stands out. I particularly like how they gave her hair a different shade of red from the red highlights on her outfit. The paintwork isn't bad for a figure this small and the details show up quite nicely on the black and red plastic. 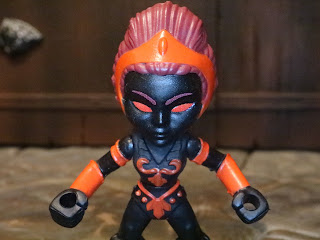 * Teela's face is really creepy looking! Seriously, she's pretty nightmarish. I like the red eyebrows, too. They match her hair and make her look rather severe. 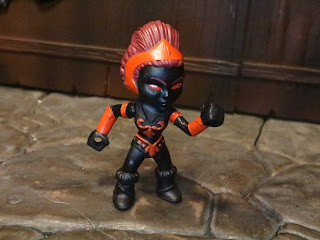 * Anti-Eternia Teela moves like the rest of the figures in the line: Swivel waist and shoulders with a balljointed head. She's not posed in a crouch like her mail counterparts, so she's just standing straight up at attention. 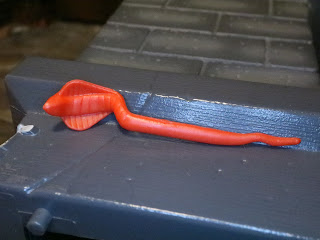 * Anti-Eternia Teela comes with a pint-sized Staff of Ka cast in a brighter red. It's pretty nice looking and fits in her hands perfectly. 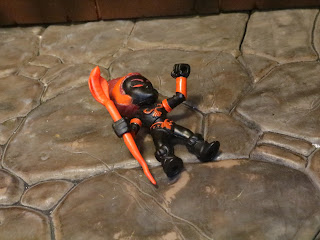 The Negatives:
* I think it's due to not being posed in a crouch and having smaller feet but Anti-Eternia Teela tends to tip backwards quite easily. You need to really adjust her arms right to get her to stand properly. 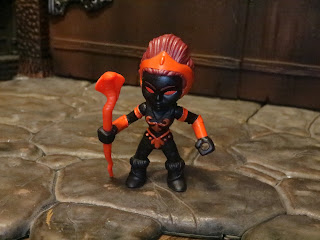 Anti-Eternia Teela can be a bit tough to get standing but once you resolve that she's a pretty cool minfigure. Considering these little warriors are under $5 bucks they're pretty nice pickups. This is the first time we've ever received an Anti-Eternia version of Teela and I'm really curious how popular Anti-Eternia versions of the heroes will be going forward. She's a Good and a 1/2 minifigure; not the best of the new series but definitely not one you'd want to skip, either. That red and black color scheme is just too eye-catching to not add her to your collection.
Are you a fan of Teela? The check out Teela: Warrior Goddess, an archive of all of my Teela reviews!
For more Eternia Minis reviews check out the following:
Anti-Eternia Ram Man
Battle Armor He-Man
Battle Armor Skeletor
Beast Man
Buzz-Off
Evil-Lynn
Faker
First Appearance Trap Jaw
Golden Armor Skeletor
He-Man
He-Man (Series 2)
Horde Zombie He-Man
Jitsu
Man-At-Arms
Ram Man
Serpent Claw Man-At-Arms
Skeletor
Skeletor (Series 2)
Slime Pit Multipack
Stinkor
Trap Jaw