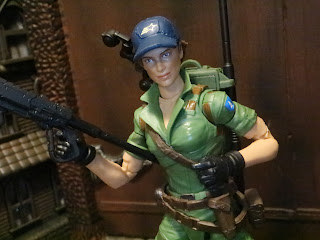 I actually found Lady Jaye back in May (the same time as I found Flint) and I've since seen her in stores 2 or 3 times, meaning Hasbro actually seems to be doing a decent job of getting this series of figures in stores. For some reason they're doing really small series with the G.I. Joe: Classified Series as the most recent case pack is only made of three different figures: Flint, Lady Jaye, and a repacked Cobra Commander. Lady Jaye is another A- /B+ lister and a welcome addition to the theme. Like most of the Classified Series she really feels like a true update of her vintage design with some more modern elements. Of course, she does have some of the elements of her vintage figure that make her feel outdated, too, namely a larger camera and a javelin launcher. I wish she had a more useful primary weapon, leaving the javelin launcher as a secondary weapon, but that's not the route Hasbro went with her. She's quite cool, though, and does have the swappable hair feature that I first remember from the Dungeons & Dragons Drizzt figure from earlier this year though I'm sure some import figures have used the feature previously. Let's take a look at Lady Jaye, the G.I. Joe team's covert operations specialist, after the break... 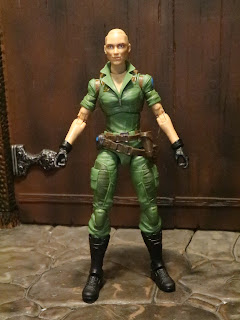 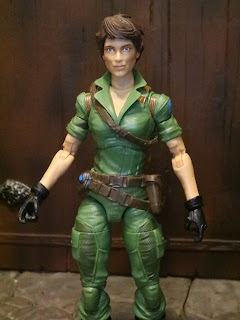 * Lady Jaye has almost always worn a green jumpsuit with a flared collar and she's rocking it here, too. Hey, some looks are pretty timeless. The detail is incredible on the costume and she continues the excellent sculpting work of the Hasbro team in showcasing so many different textures on sculpted outfits. There's plenty of folds and wrinkles on the suit along with some ribbing, textured material around her thighs, and lots of folds and pockets. The paintwork is neat and clean all around and she's sporting a double belt (it's a separate piece but not removable), a chest strap (a removable piece), and sculpted shoulder straps around her shoulders. 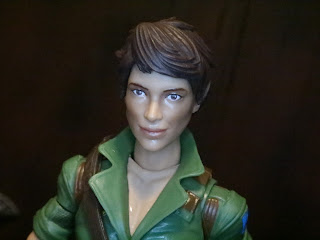 * I really like Lady Jaye's headsculpt. She's quite pretty but in a very normal, natural way. She looks like she belongs with the rest of the team. Lady Jaye has a short haircut that I think is called a pixie cut, and it seems practical for someone who may have to put on lots of wigs and disguises but who doesn't want a haircut that stands out and screams "I'm hardcore" or anything. It's inspired by her look in the original cartoon series and how he looked sometimes in the Marvel comic book. 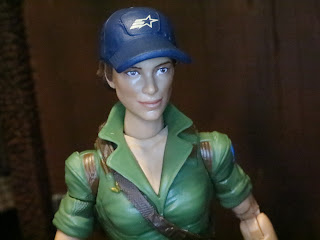 * Lady Jaye doesn't have two heads. Instead, her hair is a swappable piece and she comes with a separate hairpiece with her ball cap, like on the vintage figure. It has the G.I. Joe stars and stripes logo on it and it looks great. The hair swapping feature works really well and doesn't look out of place or anything on the portrait. It's a pretty cool feature. 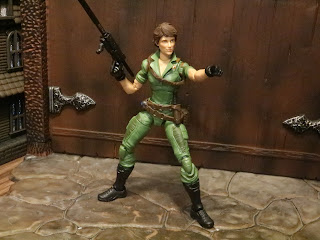 * There's not much to say about Lady Jaye's articulation that I haven't said on most every other review: It's excellent and really allows for some great, expressive poses. Getting her to hold weapons with two hands is a breeze, too. She does have double jointed elbows which is a first for a female in this line. They work great and while they take a little effort to pose properly they really enhance the range of motion for the figure. 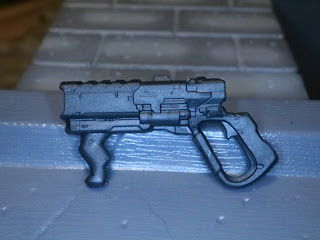 * Lady Jaye's primary weapon in the vintage line was a power javelin that seemed to be a sort of more powerful spear gun. Probably lethal and quiet though seemingly rather unpractical. Lady Jaye does come with a javelin launcher in the Classified Series, too, though the javelins are removable. It really looks like some of the high end spear guns available for purchase, though this is clearly a more sophisticated piece of equipment. The sculpt is nice and I like the forward grip on the weapon. 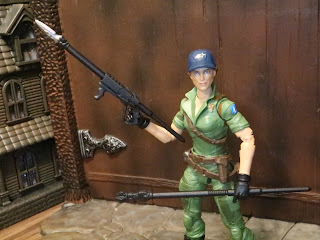 * To load the javelin launcher the figure includes two javelins. They're solid black plastic shafts with a little bit of detail and Lady Jaye can either load them into her launcher or carry them and wield them free handed like she did in the animated series. 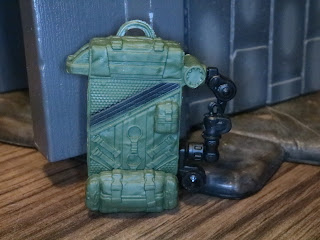 * The vintage Lady Jaye figure came with a green backpack and this one is no different. Sure, it's a more modern backpack with lots of little pouches and boondoggles on it, but it's largely the same thing. Well, except for the camera attachment on the side. The original Lady Jaye also came with a surveillance camera device but this modern updated has a camera device on her backpack. 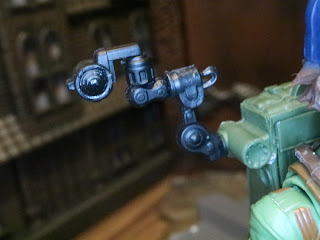 * The camera itself is really quite small. It's all of the joints, which can actually move (three pivots!), that make it larger than you'd expect. Now it's a bit strange that Lady Jaye would carry a device like this considering how small consumer cameras are these days but I'm sure there's lots more tech and special lenses and such in there than in your regular, garden variety smartphone. 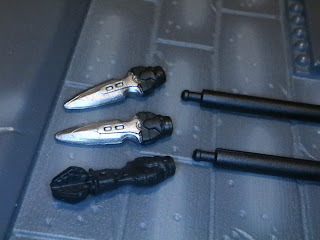 * OK, now back to the javelins! The javelins come with three tips: Two standard bladed tips and a special tip. Maybe a grenade or an EMP or something? Possibly even a taser/ stun tip? Again, it seems kind of antiquated but it's fun to imagine the high tech innovations that have been placed into the gear in this line. 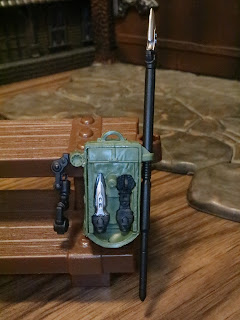 * OK, so let's bring Lady Jaye's javelins and her backpack together! One of the javelins can be stored on the side of the backpack while two of the tips can be stored inside of the backpack (well, on the back, which faces against the figures back so they're not visible). I love the little interactive features like this in the Classified Series. They make these such fun toys to mes around with, bringing to mind some of the best years of the A Real American Hero line. 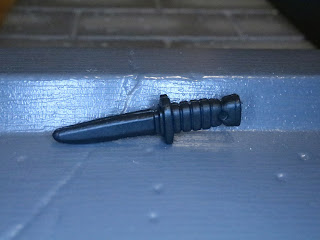 * Lady Jaye's most conventional piece of gear is a knife. It's simple and plain, but I'm sure it gets the job done when she needs it. 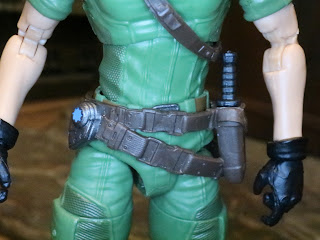 * Her belt has a sheathe for the knife and one of the cool little communicators. I love that most of the team has these on them as it gives a nice consistency despite how different their uniforms are. 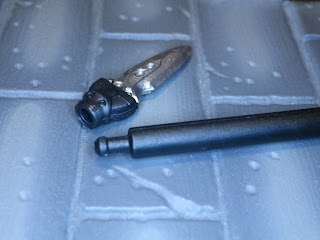 The Negatives:
* Be careful popping the javelin tips on and off. They securely because of the flared tip on the shaft but they do take some effort to pop off. 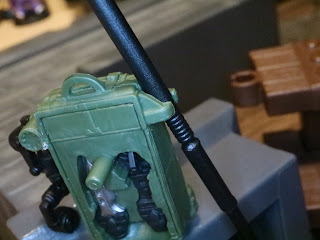 * The javelin tends to wobble a bit when stowed on the backpack. I wish it stayed on a bit more securely. 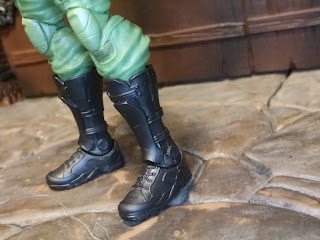 * Where is Lady Jaye's ankle holster? That's a detail that was on the vintage figure and on the 25th Anniversary figure and I wish Hasbro had kept it. It's a perfect item for a covert operative and would have given her at least one standard firearm. I feel like it really needed to be here. 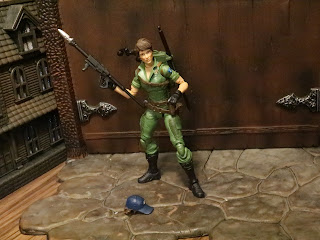 Lady Jaye is another really excellent figure in this line. It's interesting to see the juxtaposition in this line between how good the figures are and how oddly/ poorly Hasbro is managing things but it does seem to be getting better. The standard 2021 releases seem easier to find than last year's figures and Hasbro seems to be getting the Target exclusives back on shelves. Lady Jaye is fairly easy to find, loaded with cool accessories and features, and is just a cool looking figure. Great sculpt, great paintwork, and the hair swapping feature works really well. She's a Great and a 1/2 figure and definitely worth tracking down.
If you're looking for more of Lady Jaye I actually reviewed the 25th Anniversary Lady Jaye years ago at MWCToys.com.
For more G.I. Joe Classified Series figures check out the following:
Arctic Mission Storm Shadow
Baroness with Cobra C.O.I.L.
Cobra Commander
Cobra Commander (Regal Variant)
Cobra Infantry
Cobra Trooper (Special Missions: Cobra Island)
Cobra Viper
Destro
Duke
Firefly
Flint
Gung Ho
Profit Director Destro
Red Ninja
Roadblock
Roadblock (Special Missions: Cobra Island)
Scarlett
Snake Eyes
Snake Eyes Deluxe
Wayne "Beach Head" Sneeden
Zartan