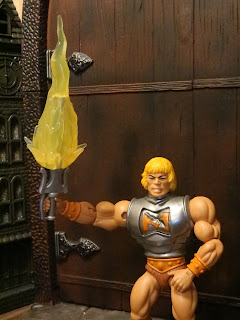 The weekend before last I hit up a Target I don't get too very often and stumbled across a massive haul of Masters of the Universe Origins figures and some of the new Marvel Legends Super Villains. I found a full case of the MOTU Origins deluxe figures and was able to pick from the case the figures I wanted, so that was pretty exciting. I've been looking for the deluxe Battle Armor He-Man for quite a few months now so it was a pleasure to finally find him. Having him in hand, though, I'm quite mixed. He is a really fun figure with some great play gimmicks and a functional battle damage action feature. He's also riddled with the weird little QC errors and design issues that make this line so frustrating sometimes. Battle Armor He-Man is my favorite vintage variant and might even be my preferred He-Man in the vintage line. Let's take a look at the deluxe Battle Armor He-Man and see where the dents in his armor lie after the break... 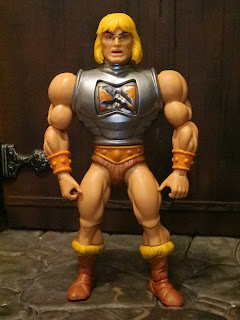 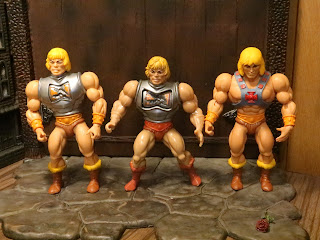 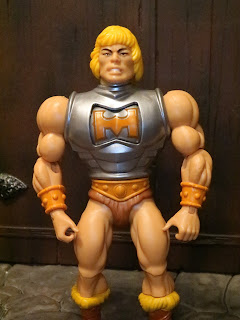 * It's tough to criticize this design as it's just so iconic to me: I love the look of the silver battle armor over the classic He-Man outfit. He-Man's wrist cuffs and belt are a bit more subdued here than on the standard release and I think they tend to look better. I love the printed "H/M" logo on his armor, too, as it's a great translation of the original. The segmented bits of the armor and the shiny look of the plastic really sell the effect. 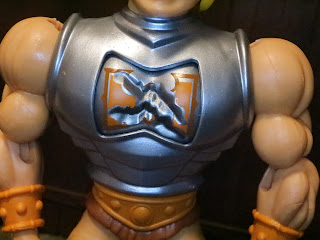 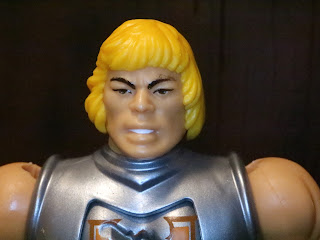 * I think Mattel redid the vintage styled head as this looks way better to me than the vintage head from the SDCC 2019 2-pack. It's a pretty good likeness of the original He-Man figure with much better colors for the skin and the hair. 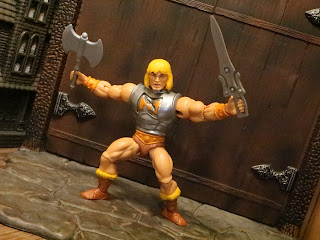 * The MOTU Origins figures are built like the vintage toys but with modern articulation. While their bulky frames make the articulation a bit clumsy, they do feel like an evolution of the vintage line. Imagine what you would get if you mixed a vintage figure with a MOTUC figure. They're quite fun to play with and they feel very sturdy.
* They're also modular and can be easily separated to make your own lazy boy customs! The arms don't separate on this one but the other standard parts do (head, wrists, torso, and boots). 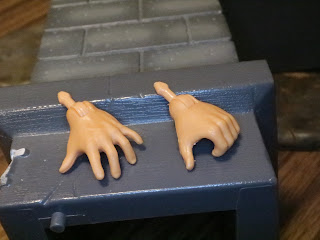 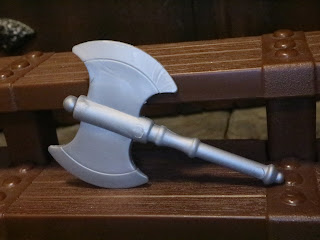 * He-Man's axe looks pretty nice. It's the same mold we've seen on the standard He-Man figure but it's now molded in silver which just looks cooler than the blue-grey of the basic figure. 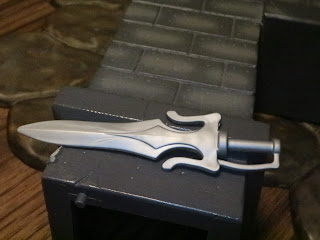 * BA He-Man also comes with the Power Sword. Well, half a Power Sword. He gets the silver half of the minicomic styled Power Sword molded in the same silver as his axe. It's a classic accessory and while I prefer the "full" Power Sword this set makes good use of the half sword concept. 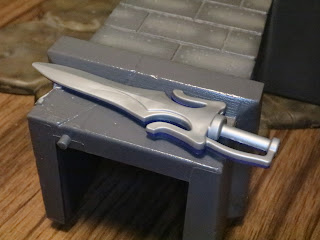 * First up, you can connect this half of the Power Sword with the Battle Armor Skeletor Power Sword. They connect securely and stay together really well which is a big improvement over most previous half Power Swords I can think of. 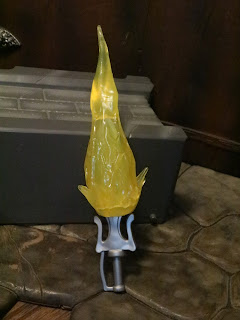 * Secondly, you can combine the Power Sword with this really cool energy effect piece. It's a translucent yellow energy effect that might be some kind of energy blast coming from the sword (like in The Legend of Zelda when the Master Sword is fully powered up) or perhaps it's intended to be a transformation effect for when Prince Adam uses the Power Sword to become He-Man. Its a really cool extra. At first, though, I thought it was supposed to be perhaps an energy effect for He-Man's fist so I put it over his hand (see the last picture in the review). It works there, too, kind of like something you'd expect to see on Thunder Punch He-Man. 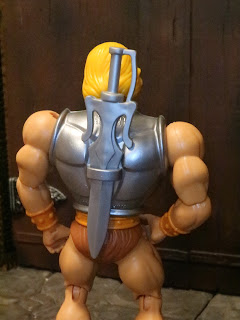 * Need a place to stow the Power Sword when He-Man's too busy punching or using his axe? Mattel actually implemented a simple storage loop for the Power Sword on the back of He-Man's Battle Armor and it works really well. I love fun little stuff like this! 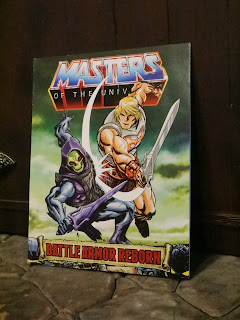 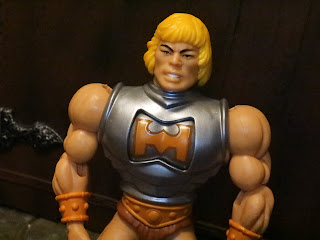 The Negatives:
* There's just something really off about He-Man's shoulders. The arms seem to be the same as the arms on any other MOTU Origins figure but the torso makes them look so awkward here. Is anyone else seeing this or is it just me? 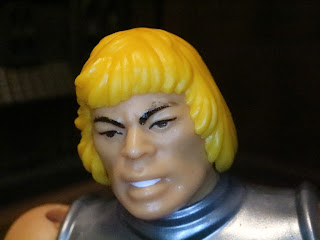 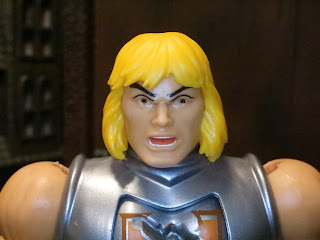 * What the heck is this? It's the Origins He-Man head with a more expressive shouting face but it just looks so darn weird. Those eyebrows are atrocious! This one gets a solid skip from me. 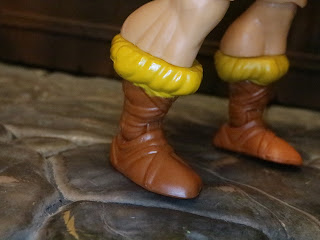 * Just like on Clamp Champ the boots have some very noticeable sloppy paint on the edges. Seriously, most of the issues with this line are little QC issues like this that should definitely be brought under control. 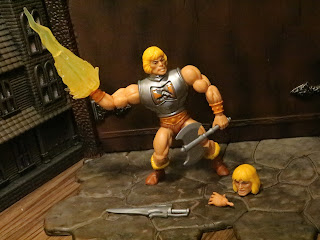 I had a lot of faults with this guy but there is a lot of awesomeness as well. Seriously, just toss the wacky screaming head in a drawer and enjoy everything else. The functional battle armor feature and the excellent accessories are really incredible, especially that energy effect. It really does look pretty cool on the sword. So far the deluxe Masters of the Universe Origins releases have felt pretty decently deluxe and seem very comparable to what you'd expect from other toylines at the standard $20 price point. Battle Armor He-Man is a Great figure that stands well on his own but which nicely augments Battle Armor Skeletor and your other MOTU Origins He-Man figures.
I've reviewed so many action figures of He-Man/ Prince Adam that he has his own review archive. Check out Fabulous Secret Powers for all of my reviews of the most powerful man in the universe!
For more Masters of the Universe Origins reviews check out the following:
Battle Armor He-Man
Battle Cat
Beast Man
Castle Grayskull
Clamp Champ
Evil-Lyn
He-Man
He-Man and Prince Adam 2-Pack
Hordak
Land Shark
Lords of Power
Man-At-Arms
Man-E-Faces
Mer-Man
Ninjor
Orko
Panthor
Panthor (Flocked)
Prince Adam & Sky Sled
Ram Man
Rise of Evil
Roboto
Scare Glow
She-Ra
She-Ra (PowerCon Exclusive)
Skeletor
Stratos
Teela
Trap Jaw
Tri-Klops
Zodac
Posted by Barbecue17 at 6/29/2021