Sam is without a doubt one of my favorite horror characters and Trick 'r Treat is one of my favorite horror and Halloween movies. Honestly, it's a movie that manages to out Halloween Halloween, which is pretty incredible. NECA has released quite a few nice Sam action figures over the years but now he's been introduced into the Toony Terrors line. I love this series of horror movie icons rendered in the style of classic Saturday morning cartoons and Sam is a great addition to the line. I almost thought about holding off on this review until October for this year's 31 Days of Toy Terror but I figure since he's such a new release I should go ahead and show him off. NECA has done a pretty good job of getting many of the earlier releases in this line back on shelves regularly but who knows if Sam will be available easily come Halloween 2021? Also, my daughter, Adora, saw this one and really wanted to help with the review. She's not seen Trick 'r Treat (she's 7 so she's quite a few years off from being able to watch it) but she loves the character and was excited to snap some pictures and help with the review. Ready for some spooky fun a few months early? Then join me after the break... 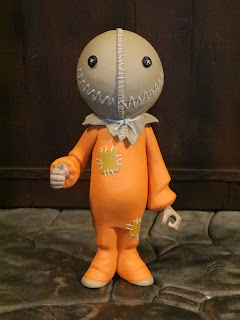 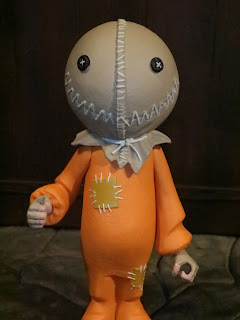 * I love the overall style of this line and Sam fits in nicely with the other characters in the series in that he captures all of the details you'd expect to see on a Sam toy but he still has the simplicity and sleekness of a classic cartoon design. Sam wears a pretty simple outfit anyway so NECA didn't have to cut out much detail to capture it nicely in an animated style: Basic orange union suit/ footie jammies, burlap bag head, and a few sewn on patches to catch your eye and break up the design.
Adora Says: "I like how they made him with fingerless gloves." 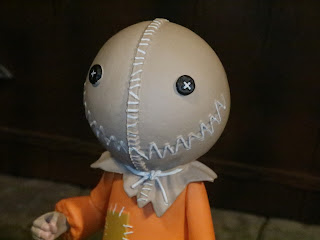 * Adora Says: "I really like how the stitching looks like real stitching and how the buttons look. I really like the buttons. The bottom of his mask is pointed and hangs how it would on a shoulder. It's a little curved like he's wearing a costume.
Sam has a simple look that's just perfectly captured here. While his burlap mask has no texture (which makes sense for a cartoon design) the details of the stitching, Sam's button eyes, and the rope that keeps the burlap around his neck is all present and accounted for. He looks pretty happy, too, which is quite charming. 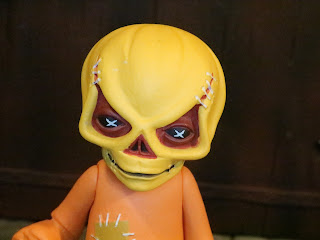 * Sam includes an alternate portrait that shows off Sam's unmasked, pumpkin-like visage. It's certainly not as creepy as the head-sculpt from the Ultimate Sam figure but it's still kind of unnerving. That's a good thing, though! There's still some stitching here which is pretty disturbing to think about on what appears to be Sam's actual face.
Adora says: "I like how his head looks like a pumpkin and how his nose is a triangle." 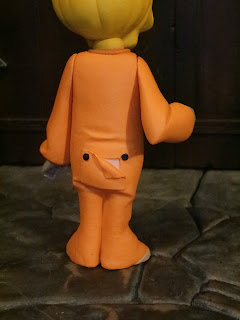 * Adora Says: "I like how they captured the look of the flap and that it looks opened; it doesn't look like a pocket."
I have a Sam costume and I completely forgot that he has a back flap. It's definitely a funny little detail and seems like something that would be there if Sam were a cartoon character to play up his child-like nature. You know, before he smacks you in the nose with a lollipop or something. 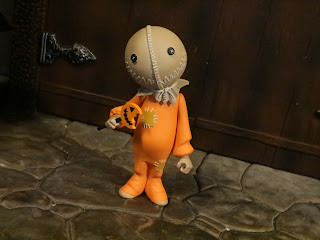 * Adora says: "I like how you can make his head look up at an angle and how his wrists move.

Sam doesn't have much articulation but that's kind of par for the course with this line. These are intended to be placed on display rather than actually played with and posed. That being said, Sam does have some very expressive head articulation (it's a double balljoint/ barbell joint) which makes displaying him quite fun. 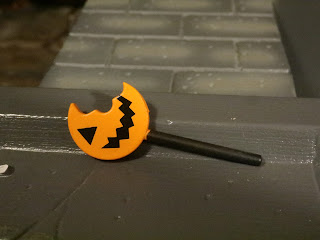 * Sam has quite a few accessories that he always seems to come with but his distinctive Jack o' Lantern lollipop is probably his most iconic. It's recognizable but simple and goes great with the figure.

Adora says: "It looks like a real lollipop because there's something on the front but nothing on the back." 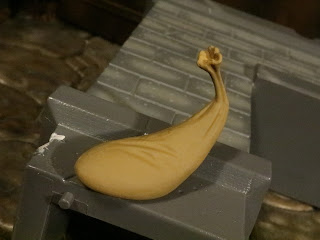 * Adora Says: "It looks like it's full but I also like that you can see it's flat on the floor."

It's a simple looking brown bag, so there's not much to say about it. Sam definitely totes one around, though, so it's a key item for him. He is a trick 'r treater after all. Interestingly, I noticed that since the bag rests on the ground you can sort of use it to help keep Sam standing up straight since his oversized noggin does tend to cause him to tumble over. More on that in a moment, though. 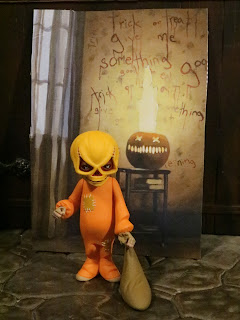 * Each character in this series comes with a cardboard backdrop that you cut out from the back of the package. Sam's shows off Mr Kreeg's house after Sam pays him a visit. These are a fun touch that reminds me of the cardboard backdrops that came with various toylines of the late 80s and early 90s, such as Monster Force, which you snipped out but probably never really used.

Adora Says: "The pumpkin has the X's for eyes and the stitches for a mouth like Sam's mask does. That's kind of cool. I also like that the wall says 'Trick or treat, give me something good to eat." 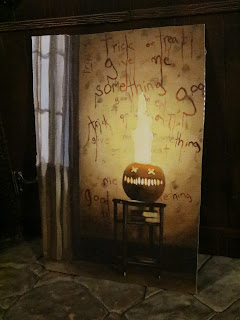 The Negatives:
* I say this every time but a cardboard backdrop is just a cardboard backdrop and it ends up looking kind of weird just sitting behind the figure. I wish there were a base this could clip onto or perhaps if this were a separate piece included in the package that folded down and made a diorama like base with a small floor section. 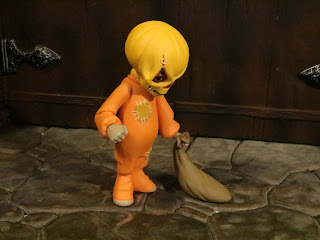 * For the most part Sam stands fine on his own but he's a bit wobbly, particularly if his head is tilted forward at all. He really feels like he needs a stand. Yeah, you probably have something in your collection or parts bin you can use, but something should have been included. Also, you can use this bag as kind of a stand. It works and looks pretty good so I'm going to consider this a viable option. Still, a disc stand would have been nice. 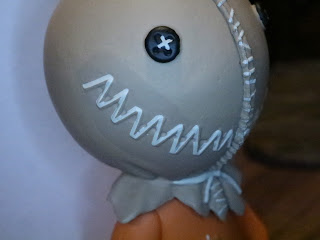 * Adora caught something wrong with the paintjob that I didn't even see!
Adora Says: "I'm guessing that the artist that did the toy used the wrong color."
I'm thinking since this is only on one side of the mouth that someone tried to clean up some sloppy work on the mouth stitches and the darker paint circle is a misguided attempt at blending the colors. Who knows?
I don't buy all of the Toony Terrors release by any stretch but I do pick up the characters I really like and Sam definitely qualified here. Of the Toony Terrors releases I've purchased so far Sam is in league with Ash and Michael Myers as they're all characters that I absolutely love. Sam turned out really nicely and if it weren't for Adora's keen eyes I wouldn't have even noticed that weird paint blunder around his mouth. He's quite nice, though, with some great accessories, especially the alternate head. That's a pretty welcome extra for a $13 dollar figure. He's a Great figure and from what I've seen so far he seems to be a brisk seller from this series of Toony Terrors.