Jeopardizing June: Ninjor from Masters of the Universe Eternia Minis by Mattel 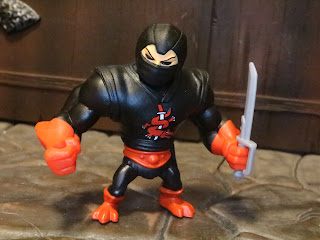 For June 2021's themed Masters of the Universe series of reviews I'm trying something a bit different: The theme is a mystery and you have to guess what the subjects of the reviews have in common! Check out all the details and how to enter the contest for a prize package here.
Today's review for Jeopardizing June is the last in this series of figures with a mystery theme. Seriously, what do the figures I've reviewed in this series have in common? Don't overthink it! Lately I've been selecting some of my themed months based on figures I had recently purchased so the review series had a mixture of older and newer releases and that's what happened with this month's theme. I had three of the newest MOTU Eternia Minis just staring me in the face that all looked fairly similar so I decided to craft a theme around them. Ninjor has definitely been a popular figure over the past year or so as he went from only having a vintage and Masters of the Universe Classics figure (where he was just called Ninja Warrior due to a trademark issue) to now having an Origins figure, a POP! vinyl, and an Eternia Mini. I'm sure we'll see him again, too, as even though he came out at the end of the line he's a popular figure due to the rareness of the vintage toy and the ease in making him for Mattel as often they can just reuse basic parts like the vintage figure had. Ninjor is a simple guy but that doesn't mean he's not incredibly cool looking. Let's check him out after the break... 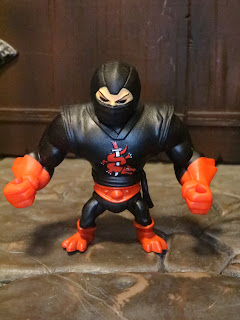 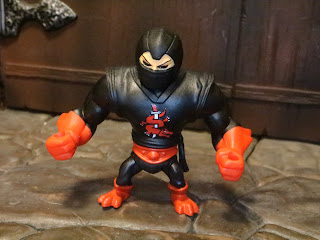 The Positives:
* What is there to say about Ninjor? He's a villain clad in his always attractive black and red ninja outfit. What's not to like? His outfit looks fantastic and the paintwork is bright and bold on the red areas. The torso of his outfit is even sculpted to look like a tunic that lays over his bodysuit. 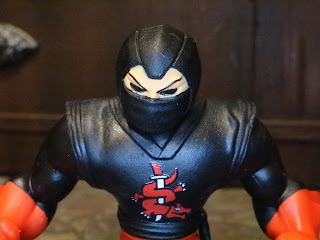 * While Ninjor doesn't have the eerie red eyes of the MOTUC version he's till a pretty fearsome looking ninja. The all black eyes are creepy though, to be fair, they are in line with the stylized features of this line. 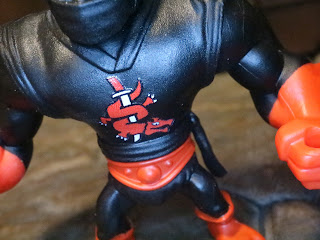 * I really like how neat and clean the print on Ninjor's chest is. Mattel did a superb job with this detail. 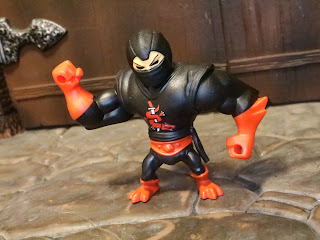 * These are fantastic minifigures with decent articulation, especially the ball jointed heads.  They're very durable little figures and would probably fit in well with lines like Imaginext and the Hasbro Heroes figures, so if you have a little one who's into MOTU these could be some decent starter toys. They're fun to play with and have a lot of shelf presence despite being so small. 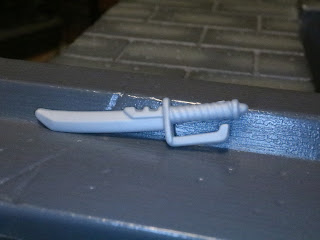 * While Ninjor doesn't come with all of the weapons his vintage figure had he does come with a katana. It's the same as Jitsu's but molded in silver. He can hold it better in his left hand than his right due to the placement of the hand guard. 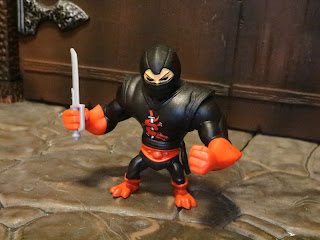 Ninjor is one of my favorite MOTU Eternia Minis in recent memory. Heck, I'd easily give him a Great and a 1/2. He's got a fantastic sculpt, a cool accessory, and some solid printing on the logo on his shirt. Isn't it funny how some of the "popular" MOTU figures from the vintage line often get skipped yet the more obscure fellows like Scare Glow and Ninjor are go to characters now? I don't know if it's the perceived rarity of the figures or the fact that they use standard bodies but Mattel seems to love them. Pick up Ninjor before he vanishes as he's a winner.
If you're interested in more of Ninjor check out my review of the Masters of the Universe Classics Ninjor/ Ninja Warrior , the Origins Ninjor, and the Funko POP! Ninjor #1036.
For more MOTU Eternia Minis reviews check out the following:
Anti-Eternia Ram Man
Anti-Eternia Teela
Battle Armor He-Man
Battle Armor Skeletor
Beast Man
Buzz-Off
Evil-Lynn
Faker
First Appearance Trap Jaw
Golden Armor Skeletor
He-Man
He-Man (Series 2)
Horde Zombie He-Man
Jitsu
Man-At-Arms
Ram Man
Serpent Claw Man-At-Arms
Skeletor
Skeletor (Series 2)
Slime Pit Multipack
Stinkor
Trap Jaw
Posted by Barbecue17 at 6/30/2021