Jeopardizing June: Hordak Mini Bust from Masters of the Universe by NECA 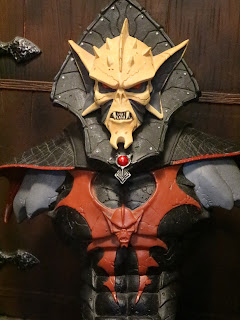 For June 2021's themed Masters of the Universe series of reviews I'm trying something a bit different: The theme is a mystery and you have to guess what the subjects of the reviews have in common! Check out all the details and how to enter the contest for a prize package here.
Last month's Malevolent May was a month long tribute to Hordak but, lo and behold, the ruthless leader of the Evil Horde has made himself known again for Jeopardizing June! This time I'm checking out the Hordak mini bust that was released by NECA in 2005 during the time when the Four Horsemen were really getting the chance to go wild and release lots of stuff they didn't get a chance to work on in Mattel's main 200x line. NECA's releases were for display rather than play but they really showed off the great redesigns of the 200x era, especially the mini busts. NECA called these mini busts (as opposed to their micro busts, which were tiny), but they really seem to be about 1:4 scale. I picked up this Hordak statue from a comic shop probably around 2010 to use with my Masters of the Universe Classics to use as some sort of giant Hordak projection (like the Emperor in The Empire Strikes Back). It's a great bust and is the standard edition which had a run of 1,500 (there was also a Convention Exclusive sold at SDCC  2004 and Wizard World Chicago 2004 which has a run of 750 and an Artist Proof with a run of 150. According to this 2004 press release from Raving Toy Maniac the Convention Exclusive was supposed to have a metallic red base while the later standard run would have a black base but mine has the larger run number (1,500) with a metallic red base. I actually haven't seen any pictures of a black based Hordak so maybe NECA ended up not changing it? The mysteries! Let's take a look at another excellent Hordak product after the break... 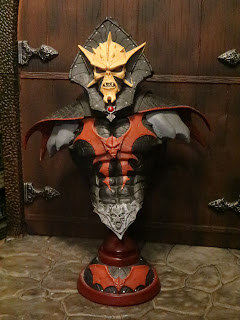 Sculpted by: The Four Horsemen 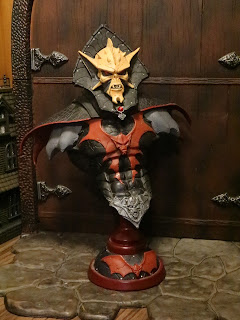 * NECA called this a mini bust but it's a pretty sizeable item coming in at 10 1/4 inches from the base to the top of Hordak's pointy collar. Since it's a bust there's not a pose or anything but the body seems to be at a slight angle and is best viewed rotated a few degrees with Hordak looking past the viewer's right shoulder. It's not overly brittle or anything but this is a heavy piece made from a fragile material like polystone or something take care when handling and displaying him, especially with the details on his cape. 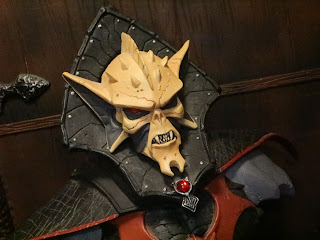 * Hordak's headsculpt is incredible and really showed off the wicked redesign of the character from the Mike Young Productions Masters of the Universe series. NECA would release a Hordak mini statue/ staction in 2005 but this was their first released Hordak product and it was impressive. They really nailed the bone-like nature of Hordak's face and little details such as his teeth, his weird, sharp chin, and the protrusions on his head are amazing. 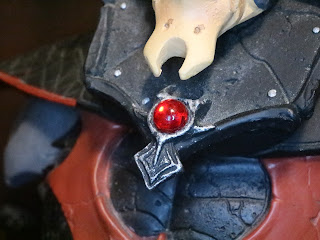 * Hordak's impressive Dracula-like collar has lots of details in the sculpt such as the rivets holding it together and little marks and mars to show wear and age but one of the most eye-catching elements is this simple red ruby underneath his chin. While the original Hordak's design was based on a witch doctor's mask, this definitely feels like some inspiration from the traditional depiction of a vampire right here. 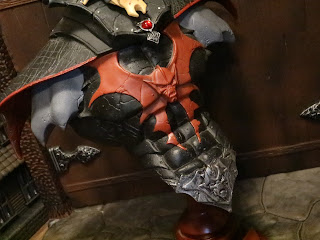 * The 200x line gave most of the characters very detailed, muscular bodies that were still very sleek with super chiseled features and that's what you're getting here. While Hordak is sporting armor it's clearly been contoured to show off his killer body. The man is great at branding himself, as can be seen by the very dramatic Horde logo on his chest, and he's also apparently very good at crunches and lifting. 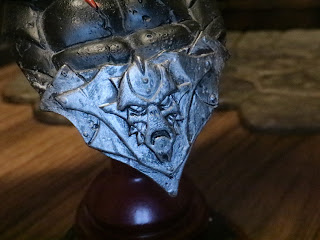 * Have you ever worn a belt buckle with your own face on it? Because Hordak has. Yeah, yeah, Filmation buffs might argue that this is Horde Prime but I ain't buying it. Hordak just likes to show off. 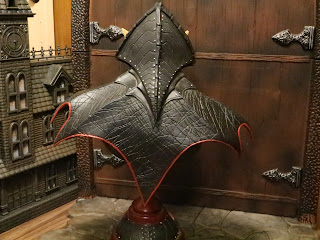 * Since this is a bust Hordak's cape doesn't go all the way down to the ground but his mantle is included. It's very leathery and bat-like. It's also cool to see his weird high collar from the back. It seems rather armored and like something Dracula might have worn in Coppola's Bram Stoker's Dracua. 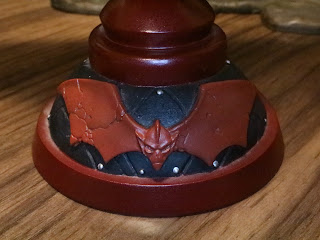 * Here's the base! The front part of the base shows off a Horde bat logo with some cracked wings. I love the theming of the base as it's clearly tied in with Hordak and not just a generic base shared across the line. 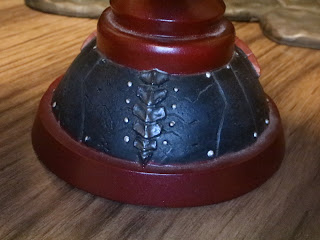 * On the back of the base is the weird visible exoskeleton-like spine running down Hordak's back. Creepy! 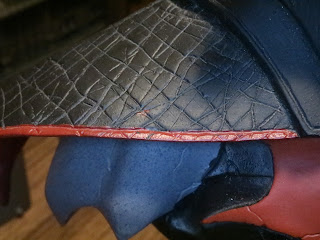 * My only complaint about the statue is that the red hem of Hordak's mantle does have some slop in a few places. Mine's not terrible but if you're looking at the statue closely you will notice some issues. 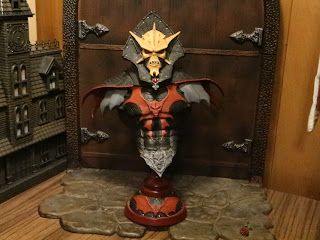 While I've recently reviewed what might be the greatest Hordak of them all I still think this NECA Hordak bust is worth adding to your collection if you're a Hordak fan. While Hordak certainly doesn't get the attention and merchandise that Skeletor does there are some cool items out there for sure. This was a Great release from NECA's MOTU offerings and it's been one of my favorite pieces from my collection for quite some time. The prices on these are all over the place but it's amazing how often you'll find them for some truly excellent prices. Shop around and you may get a steal on this item that would make ol' Hordak proud.