Jeopardizing June: Anti-Eternia He-Man from Masters of the Universe: ReAction by Super7 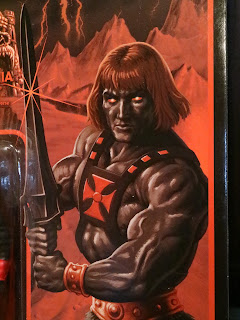 For June 2021's themed Masters of the Universe series of reviews I'm trying something a bit different: The theme is a mystery and you have to guess what the subjects of the reviews have in common! Check out all the details and how to enter the contest for a prize package here.
For the first true installment of Jeopardizing June I'm actually reviewing a figure that I haven't removed from the package. I do that very rarely but I liked the look of Super7's Masters of the Universe: ReAction Anti-Eternia He-Man so much that I decided to not take him off the card at all. Anti-Eternia He-Man was an exclusive for PowerCon 2018 and came on a vintage styled blister card that really stands out from the rest of the line. There was a version of this figure where the packaging was in German which was an exclusive for S.P.A.C.E., so if you see this guy in German that's where it originated. The evil He-Man of Anti-Eternia first appeared in a 1985 German audio-play and has since become a fairly popular MOTU variant. He also appeared as the primary antagonist in DC's He-Man and the Masters of the Multiverse comic series. Near the end of the MOTU: ReAction line Super7 released a clear smoke variant of Anti-Eternia He-Man who was easier to obtain than this guy. Ready to delve into the first true review of Jeopardizing June? Then join me after the break... 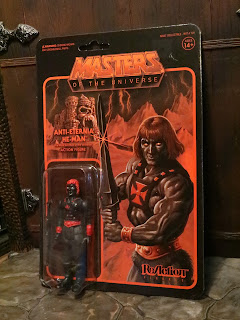 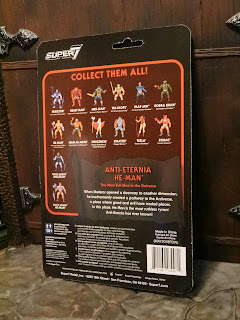 * I showed off the packaging above but I'll show off the back quickly. It actually has a bio for Anti-Eternia He-Man and shows off other figures in the line with vintage cross-sell art. 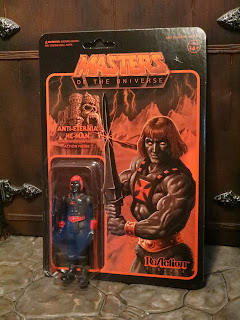 * Not much to say here that I didn't say in my review for the Clear Smoke variant of this guy or any other He-Man figure. I love the awesome card art, given a very cool red and black color scheme that stands out from the standard ReAction cards.

* Like every other He-Man this guy has 5 points of articulation, styled after a vintage Kenner action figure. 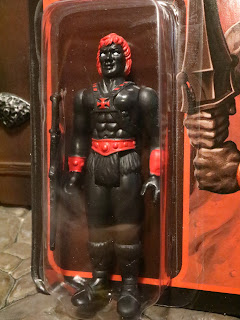 * He's just a repaint of the basic He-Man but that red and black looks so slick! The paint is pretty sharp and those white eyes look really creepy on this headsculpt. 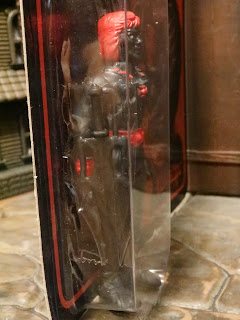 * He's packing a copy of the Power Sword molded in black this time, too. You just gotta accessorize, even if you're evil. 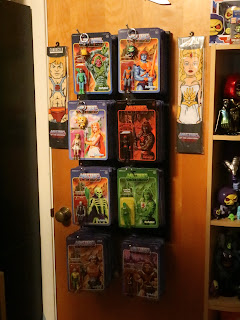 I think every time I reviewed a ReAction figure I said I'd show off how I have them displayed. Well, this is it! The figures are displayed on metal shelf rods by their peg hooks like if you were at a toy store. I've got them divided into eight pegs with about five or six figures on each peg (maybe a few more on some. I change them up from time to time but some of my favorites are always on display, particularly those who are the most unique looking. Anti-Eternia He-Man was a Good and a 1/2 figure and fun for those who either really had an attachment to the character or who loved the faux-vintage aesthetic. They didn't come with many accessories but they're still pretty cool toys. I'd love to see Mattel allow Super7 to continue this line but perhaps they feel it's too similar to Origins (both being faux vintage lines)? It's crazy how Hasbro is letting Super7 put out ReAction and Ultimates of so many of their properties, so either Hasbro is more confident or they just want someone to get product on shelves since, taking the G.I. Joe: Classified Series as an example, they can't seem to do it themselves.