Action Figure Review: Kane from Masters of the WWE Universe by Mattel 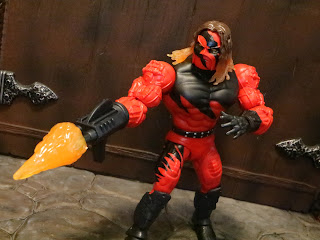 Some of the Masters of the WWE Universe mashups are more inspired than others. Giving Seth Rollins Zodac's armor and a flaming sword? Uhh, OK. Giving Stone Cold Steve Austin actual snake eyes? OK, that's kind of cool I guess. Allowing the New Day to "swap" between members ala Man-E-Faces? Now we're talking! One of the best yet is today's figure, presenting Kane as a literal red machine who is created from Roboto parts. Amazing! This guy is really cool and he's definitely my favorite figure from series 6. The Big Red Machine is decked out as an actual cyborg and ready to set out and destroy the heroes of WWEternia. Need any more incentive to check out a red and black flamethrower wielding action figure of the mayor of Knox County Tennessee? Then join me after the break... 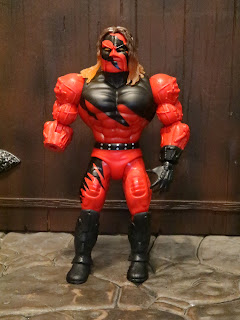 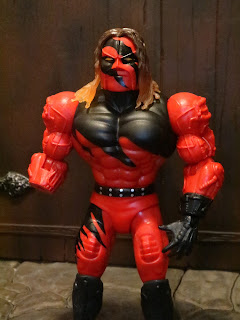 * Kane uses the arms and legs of Roboto with a standard torso and an amazing red and black paintjob. Seriously, this is a pretty incredible looking figure. Is he the best MOTWWEU figure released yet? I'm not going to rule it out as he's just so impressive looking! That paintjob is wicked! 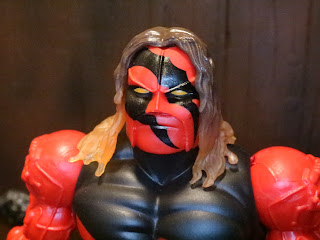 * The headsculpt is without a doubt the best part of this figure. It's a robotic looking Kane mask with translucent, fiery hair. Groovy! Seriously, those yellow eyes and that red and black paint job look all kinds of amazing. 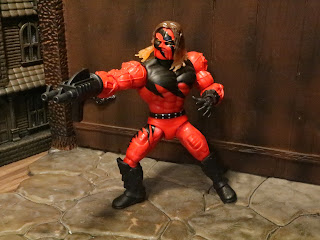 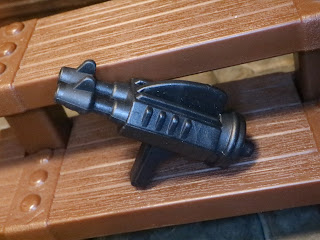 * Kane comes with two interchangeable hand weapons, the first being the double barreled gun from Roboto. Here it's referred to as a flamethrower since we know that Kane has a thing for fire. It's a cool accessory and fits on his right arm well. I love the design of this weapon. 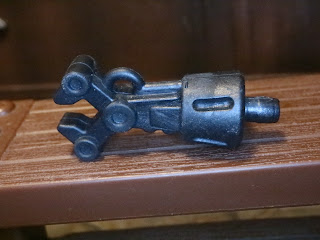 * Next up is the same gripping claw that came with Roboto only now it's molded in black as well. The packaging calls these "pinchers" and they fit on the right arm just like the flamethrower hand. 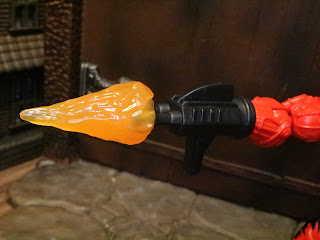 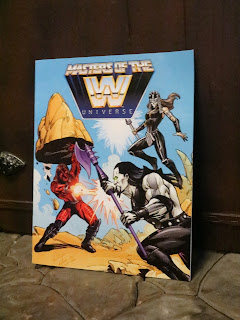 * Kane's minicomic pays homage to the vintage minicomic "The Battle of Roboto" with Kane in the place of Roboto. Inside we learn more about the Demonic Red Machine: He has pyrokinesis, can walk through fire and brimstone, and he was rebuilt by the Skull Queen to battle the Undertaker. 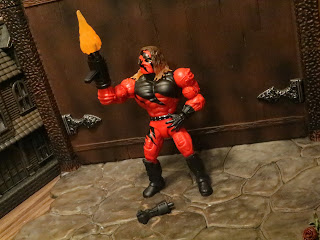 Kane is one of my favorite figures in this line so far. There aren't too many new pieces or anything (though there is that amazing portrait) but he's an excellent mishmash of parts that makes for a visually impressive figure. Kane looks pretty menacing with that red and black, especially with the flamethrower effect. He's a Great and a 1/2 figure that's loaded with extras. He's an inspired mash-up of a classic Masters of the Universe figure and a classic superstar and he's well worth tracking down.

If you're a Kane fan, check out my review of the Elite 31 Kane and the WWE Zombies Kane.