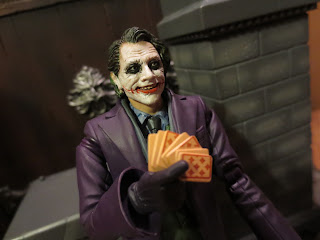 I without a doubt own more action figures of the Joker than any other Batman villain. It doesn't typically take much to convince me to buy an action figure of the Joker, particularly when it's based off of Heath Ledger's iconic portrayal of the character. I'd never heard of the Miracle Action Figure EX (or MAFEX) action figure range from Medicom but they seem to be on their way to becoming a significant line as they have characters available and and on preorder from a number of licenses, including: Star Wars, The Amazing Spider-Man, the Marvel Cinematic Universe, and the Christopher Nolan Batman films. While I own a few of the Joker figures from Mattel's The Dark Knight Movie Masters line, I was never completely happy with them. When I saw this figure on sale at Big Bad Toy Store I decided to jump on it. If you're curious about these, I'd compare them with other high end 6 inch scale lines such as Bandai's S.H. Figuarts line as they come in window boxed packaging with plenty of extras including hands, heads, accessories, and stands. Ready for a closer look at the Joker from The Dark Knight? Then join me after the break... 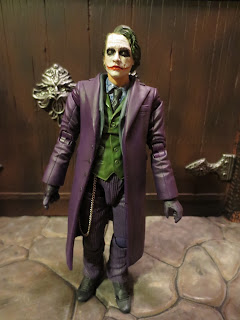 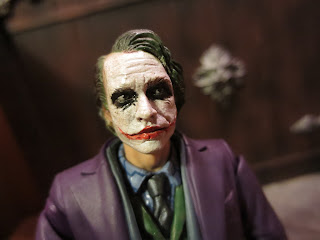 * I do believe that this is the best Heath Ledger as the Joker headsculpt in the 6 to 7 inch scale that we've seen yet. This really captures his likeness pretty well. I love the shifty eyes and the smeared, caked on paintwork. There's a second headsculpt, but I'm not as thrilled with it. I'll cover it in a minute or so. 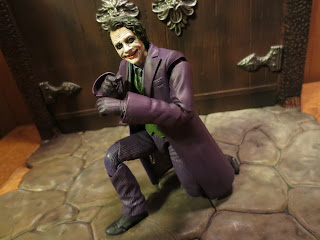 * Did you read through the articulation list on this guy? There is some crazy movement here. Like the S.H. Figuarts range, the MAFEX brand seems to offer incredibly well designed and implemented articulation. The Joker can hold objects with both hands, crouch, leap, and basically take any pose you'd like him to. Much of the articulation is fairly well hidden as well, which is always a plus. 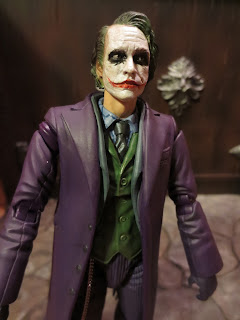 * The outfit looks really good. This is the Joker's classic outfit from The Dark Knight and it really is just a great, classic Joker costume. Purple trench coat, green vest, and a greenish waist coat. The waist coat is part of the jacket sculpt (which isn't intended to be removed) but you can see it poking out. There's some nice paintwork here and some great texture work on the different outfit pieces. The sculpt really sells the Joker's layered look while keeping him thin and shifty looking. 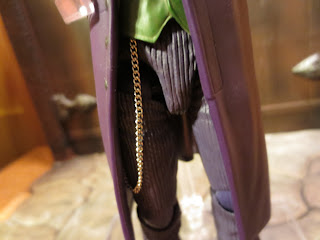 * The Joker's chain is a real metal chain. It's made from dozens of small metal links. It's much nicer than the thin plastic cords you typically see on most figures. 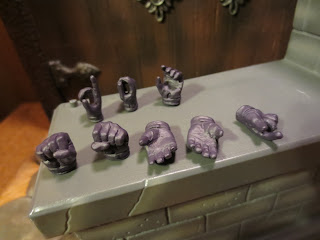 * Eight hands are included with the figure so that you can always make sure that the Joker has the right grip for whatever job he's working on. He comes with a pair of fists, a pair of open palms, a right handed pistol grip, a right handed knife grip, a left handed C-grip, and a right handed pinching grip (for the included playing cards). These all swap really easily and there's an appropriate hand for each included weapon. 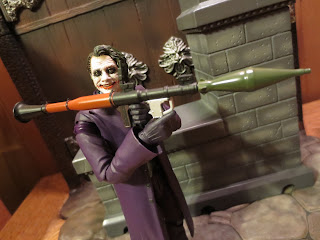 * Want to see the Joker destroy the Tumbler? Then you're going to need to give him this Norinco Type 69 RPG! Doesn't he look happy? There's some nice paintwork on this piece and, thanks to his incredible articulation, you can get some cool poses with it. 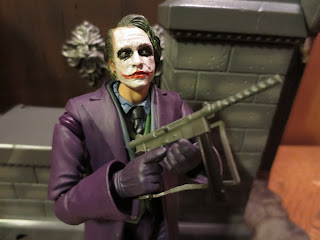 * The Joker also comes armed with the submachine gun (a Smith & Wesson M76) that he uses against Batman after the destruction of the Batmobile. This is a nicely sculpted piece and the color of the paint matches up very well with what's scene on screen. The stock doesn't unfold, but the Joker didn't unfold the stock in the film, so this is accurate. The Joker's not much of a "using a stock" kind of guy. 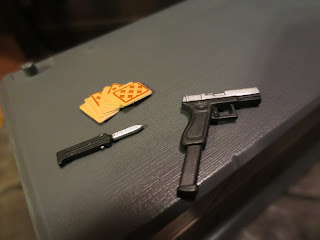 * For mayhem on a smaller scale, the figure also includes a fully automatic Glock 17 with a 33 round magazine, a small switchblade knife, and a spread of playing cards. For being such small accessories the paint and sculpting is spot on. You can even see the little silver button that ejects the blade on the switchblade. The cards are blank on the front but they have a generic playing card pattern on the back. 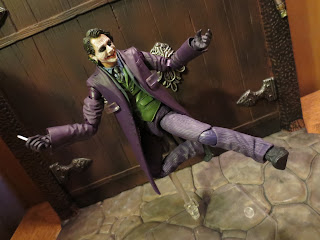 * Remember that awesome scene where the Joker does a flying kick in The Dark Knight? Well, it doesn't matter if you do or don't: With the included stand you can make such gravity defying moves happen! 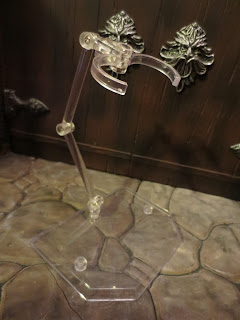 * Yes, this stand is included with the figure and it's very, very nice. It comes fully assembles but it does have multiple points of articulation to help keep your figure posed. The stand features: A swivel at the base, three hinged on the arm, a swivel at the top, and a hinged clasp to secure the figure. The arm can be removed from the base and placed in any one of the three holes present there. 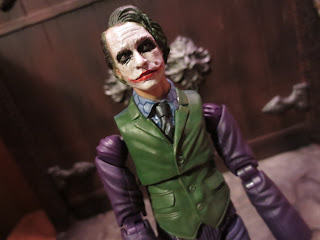 * It might not be fair to complain about this since the figure is already so loaded with extras but I do wish the Joker had come with an extra set of arms for when you remove his jacket. As you can see, he looks incredibly awkward without the jacket on. Even some static arms that imitated his infamous clapping scene would have been welcome. 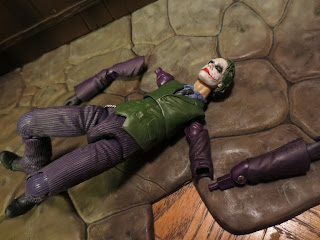 * Don't worry! The figure isn't broken! The joints do come out of socket rather easily, however. This is partially due to the way the figure is designed and perhaps also a safety feature to prevent breakage (a joint will detach before snapping). The figure will be fine on display and you ca pose and repose it with no worries. It's not "hand candy" though, so if you're actually playing with the figure, it could very easily come apart. 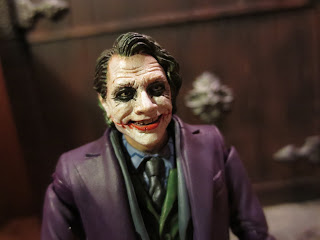 * I'm not sure I like this headsculpt as a Heath Ledger joker. It's a great headsculpt in and of it's own right but, when you compare it to the other headsculpt, it just appears like it's actually a different person under the makeup. The face seems much rounder and fuller than the thinner face of the frowning headsculpt. Is it just me? 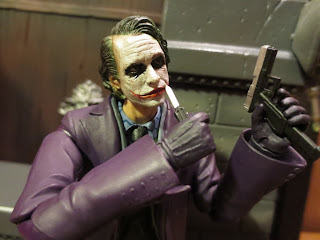 This is probably my favorite traditional action figure of Heath Ledger's portrayal of the Joker (I'm not counting things like the Hot Toys or quarter scale NECA) as it has a pretty good likeness, exceptional articulation, and some really cool accessories. The figure has some weaknesses here and thee but most of them are things that I feel could have been done better versus being actual problems with the figure. If you're looking for a better The Dark Knight Joker for your collection, this guy should fit the bill. He's a Great figure!


Looking for more Joker themed reviews? Check these out: