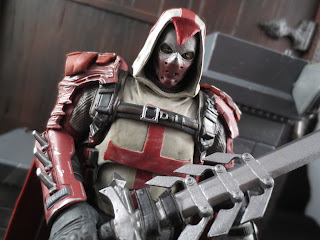 I selected DC Collectible's various Arkham-verse releases as one of my Top 10 Favorite Toylines of 2015 based on the strength of the first series of Arkham Knight releases and the fact that they continue to fill in gaps from previous games, too. I've only recently gotten my hands on some figures from the second series of Arkham Knight figures and I have to say I've largely been disappointed by them. Of course, Arkham Knight series 3 has a great selection of characters and I decided to give them a chance. I'm glad I did as series 3 has some great figures in it, including today's review subject: Azrael! Based on the second major character to bear the title of Azrael (meaning "One whom God helps" in Hebrew), Michael Lane, this figure represents an interesting side character from last summer's Batman: Arkham Knight. Clad in the armor given to him by the Order of St Dumas and with a mission to become the next defender of Gotham, Azrael sets out to prove to Batman he is worthy to be the Dark Knight's successor. Ready for a closer look at this vengeful crusader? Then join me after the break... 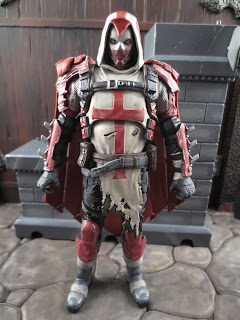 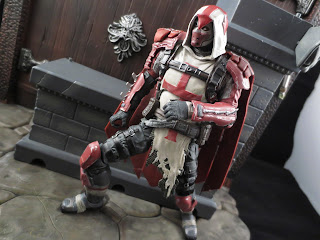 * Azrael feels really sturdy and durable, something I'm so glad to see in this line. DC Collectibles is doing a bang up job here with this line. Overall, Azrael also has a fair number of joints. He can take some great poses due to the well thought out articulation in his legs and mid-torso. His head is a bit limited, though, but that's due to the limitations of the character design.  I have some problems with the arms, but I'll address that later. 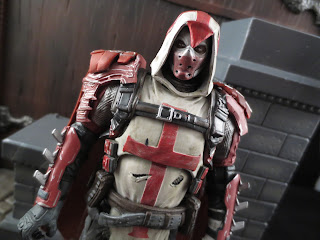 * This is easily one of the most impressive looking action figures DC Collectibles has released in recent memory. The detail is phenomenal and everything looks so sharp and layered! Azrael's head is a standard ball jointed head that has a pliable rubber hood over top, kind of like the Red Hood from series 1. Azrael just looks flippin' sweet and oh so intimidating peaking out from underneath his Assassin's Creed styled hood, doesn't he? 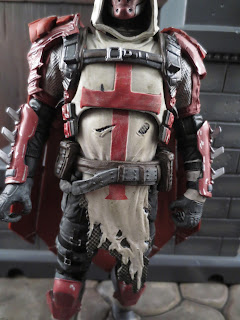 * I love the look of Azrael's armor. This is just some amazing sculpting work because it actually looks like there really are different layers here: A chain-mail coat over a tactical jumpsuit with a cloth tunic on top, all kept in place with some strategic armored pads. Whereas some of the Arkham Knight figures like Gordon and Batman himself have looked very flat and "soft," this figure has an incredible sharpness in the detail. I love the worn and tattered look of the white tunic; you can see the bits of chain-mail through the rips and tears in the fabric. Azrael's arm guards are wicked, too. They're also not bent! Woo-hoo! 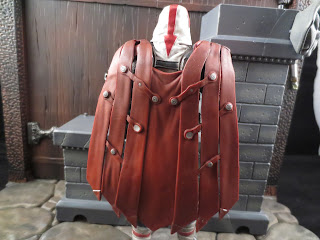 * I love this cape! It's made from a softer, pliable material and it drapes nicely down Azrael's back. The paintwork gives it a slightly grungy look and the sculpting manages to be quite sharp for something molded in a softer material. It really reminds me of the dynamic, flowing cape Jean-Paul Valley wore as Azrael back in pre-Knightfall days. 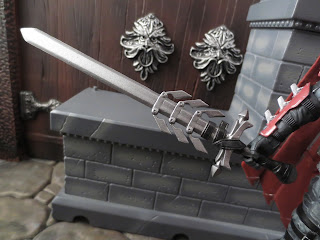 * What the heck kind of sword are you wielding, Azrael? It has a massive blade with a wicked looking handle and... retractable blades on the sides or something? Like the kind of fantasy swords you'd buy in that store in the mall that also sells ceramic wizards riding dragons and brightly colored pipes attached to gas masks which the sign informs you are only for tobacco use, it certainly looks cool if just a bit impractical. That's not a criticism, either. I love this sword. 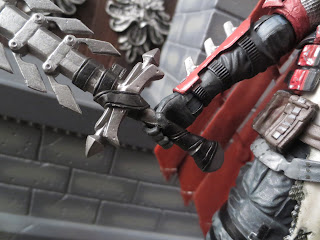 * I do have a few negatives about this figure, but they're relatively minor nits. First, his it's a buit tough to get his hands open to put his sword in.

* Second, why does Azrael only come with a sword? Most other figures in this line have included a nice assortment of goodies. Remember DC Collectibles: If you can't decide what to give us, you can always include a Riddler Trophy or something! 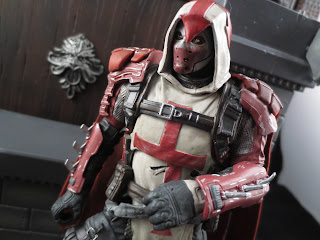 * Azrael's arms are a bit limited in their movement. All of the joints you'd expect are there but they're just difficult to manipulate. You won't be getting any two-handed sword wielding poses out of this guy, that's for sure. 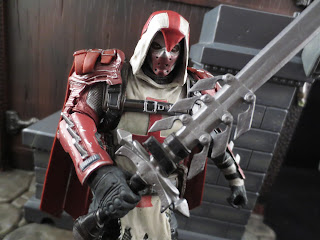 I was a bit concerned about the sculpting on this line after series 2 but Azrael and most of the other figures in series 3 have restored my faith. Azrael is just a wicked cool figure. While his arms aren't as functional as I'd like, everything else is just pure action figure goodness. He's a gorgeous figure and should fit well into nearly any Batman collection. Azrael's not a guy we see too often in action figure form, either, so it's nice to have a new version of him (I believe this is only Michael Lane as Azrael's third action figure incarnation). This is a Great figure and well worth adding to the collection, particularly if you're just looking for him to stand around and look like a friggin' boss.


I own a number of Azrael figures of both Michael Lane and Jean-Paul Valley but I haven't reviewed any of them on here. The closest I've come is reviewing a Kenner Legends of Batman Knightsend Batman figure that represents Valley in his Batsuit. So, it's a figure of today's review subject's predecessor dressed up as the successor to another character. I'm reaching here...

I've reviewed plenty of other Arkham Knight figures, though including: