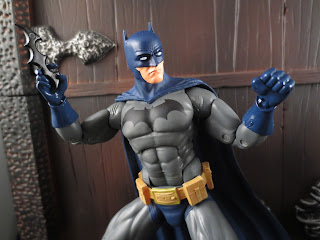 DC Collectible's new DC Comics Icons line actually came out near the end of 2015, but I'll be honest and just admit that I was suspicious of it. It's a new line from DC Collectibles that didn't initially feature any Batman related characters other than Bats himself, it was the start of a new true 6 inch scale for DC Collectibles, and it featured more comprehensive articulation which had me a bit nervous. After seeing so many good reviews of this series, however, and hearing about the cool things DCC has in store for this line, I decided to bite by picking up a Batman figure. Let me say that I'm impressed based on Batman's appearance in the Last Rites storyline after Final Crisis, you may (or may not) be surprised to know that this is not Bruce Wayne! It's Dick Grayson! Thinking about it more, that's a pretty cool action figure first as far as I can remember off the top of my very tired brain. While this guy has been out for awhile, it's never the wrong time for a Batman review is it? Join me after the break... 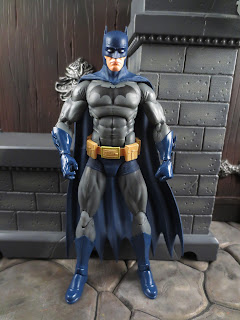 Designed by Ivan Reis and Sculpted by Paul Harding 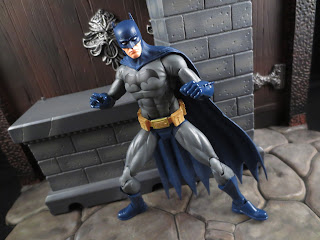 * Would you be surprised if I told you that not only is this figure superbly articulated, but it also feels as sturdy and durable (perhaps even more so) as anything coming from Hasbro and Mattel? This guy, while looking awesome, is also a really good legitimate toy. The joints are solid and well thought out.  I mean, the guy has an ab hinge and a mid-torso ball joint as well as double hinged elbows and knees. That's incredible! 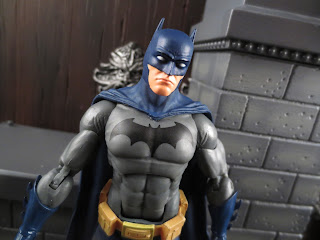 * I really like the design style of this line. While each character is based off of their appearance in a specific storyline they do have a nice, unified appearance that helps them to fit together cohesively. While you may not be able to tell at first glance that this is Dick instead of Bruce, the slimmer body and details on the suit do give it away if you're looking for it. It's a great Batman sculpt. 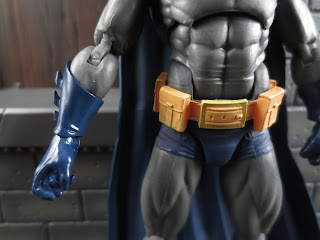 * I want to draw your attention to two areas of the sculpt! First, notice that Batman's gauntlets are nice and straight. I'm always open to calling out any Batman figure with bent gauntlets but these are impeccable. Also, check out that utility belt. Yeah, it's not the utility belt most associated with Dick Grayson's Batsuit but it looks good, doesn't it? I love the pouches more than the capsules and this handles them perfectly. Nice paintwork on the buckle, too. 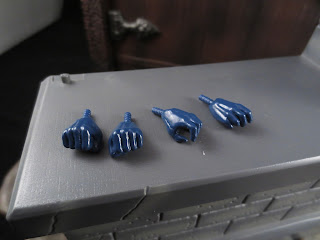 * Batman comes with five interchangeable hands which can slide out at the wrist. The first four are two matched pairs: A pair of fists and a pair of gripping hands. These are actually really easy to swap and feel quite sturdy. I had no concern about the wrist peg snapping off at all, to be honest. 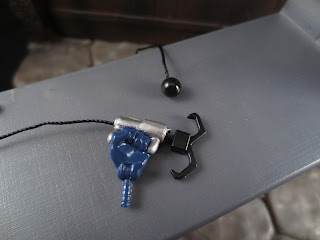 * Batman's fifth alternate hand is a left hand holding a line launcher. The line launcher is a permanent part of the sculpt while the grappling hook and line are threaded through the line launcher's housing. It's nothing too fancy but it is a cool little extra that it kind of fun to play with and adds something different to the mix. 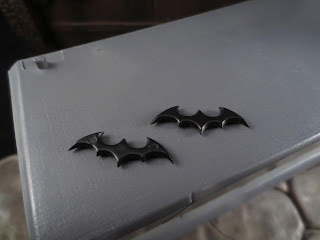 * I know we went through a dry spell for years where Batman figures really didn't come with recognizable accessories such as grapnel guns and batarangs but fortunately it seems that companies producing Batman action figures have been rectifying this lately. The Icons Batman comes with two Batarangs and they both look incredible. Shiny and sharp. Just like my dog's teeth! 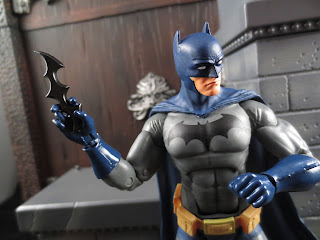 * Besides just coming with two batarangs, check out that lovely grip! Yup, Dick's fingers are splayed so that he can properly hold the batarang in a variety of different ways. I love this! Combine he great hands sculpts, the batarangs, and the double hinged elbows and you can get some incredible looking poses out of this figure!
The Negatives: 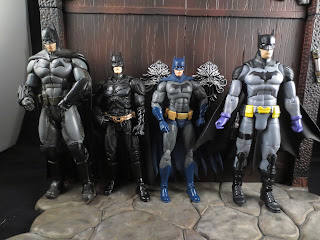 * My biggest negative with this line is the scale. There's a little thing called scale creep that means over the years toylines in the "6 inch scale" have really jumped up, sometimes to as close to 7 inches. Your typical Marvel legends or Mattel DC figure tends to stand around 6 1/2 inches.  DC Collectibles is trying something a bit different here by putting these in a true 6 inch scale. From that end, there's nothing wrong here.

Of course, what that does mean is that some
collectors might be less likely to pick up a figure or two here to mix in with their pre-established collections. As you can see from the image above, not only is this figure noticeably shorter than a standard DC Collectibles release and a DC Comics Multiverse figure, but he's even shorter than one of Mattel's Movie Masters scale figures. I love the work here but there's going to be very little integration with any other superhero or DC line already out there, and I think that's a bit of a strange move on DC Collectibles' part. 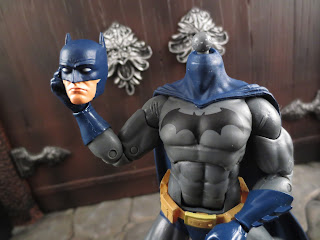 * My only technical negative with this figure is the ball jointed head. It's not a deal breaker by any stretch of the imagination but it does tend to pop off a bit more easily than I would expect. It seems like the neck peg might be a bit too short and could stand to fit a little deeper into the head. 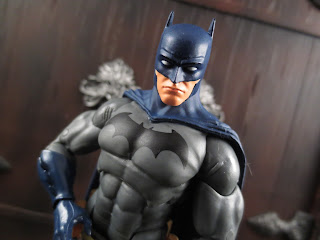 I'm looking forward to what the DC Icons line has to offer. Had they been able to mix in with a DC Universe Classics collection I would have been more eager to jump in early. As it stands, I definitely am looking forward to the upcoming Batman themed figures (particularly the Stewart and Tarr Batgirl). If Batman is the standard we can expect, I'm rather hopeful that we'll see good things moving forward. This is not only an impressive looking action figure but a darn fine toy as well. This is a Great and a 1/2 figure and well worth a second look if you skipped him when he was first released.

Of course, I've reviewed plenty of other Batman figures as well, including:

Of course, since this is technically Dick Grayson in the suit, I've reviewed the following figures of Dick:


Legends of Batman by Kenner
Nightwing