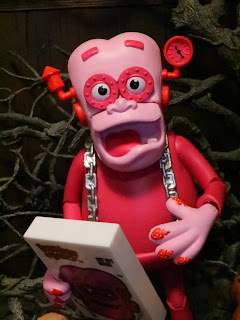 It's All Hallow's Eve eve and since it's also Saturday it's time for our final 31 Days of Toy Terror review that doesn't adhere to this year's Skeletober them: Franken Berry! Two weeks ago I reviewed Count Chocula from this same line and I'll briefly reiterate what I said there about these figures: In early Octiober my parents were traveling and called me to ask if I had seen the General Mills action figures of Count Chocula and Franken Berry. I was surprised that I somehow missed that these were a thing! Jada Toys has been on a roll lately with Universal Monsters line and now the General Mills cereal monsters mascots seems like a solid follow up Oddly, the only actual retailers I've heard of these being found at are Meijer (that's where mine were found) so that's kind of odd, right? You can order them through some e-tailers but hopefully the distribution improves on thee. Franken Berry was introduced 50 years ago in 1951, the same year as Count Chocula, and is still produced annually as a Halloween treat. Let's take a look at this strawberry loving monster after the break... 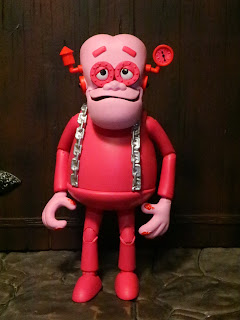 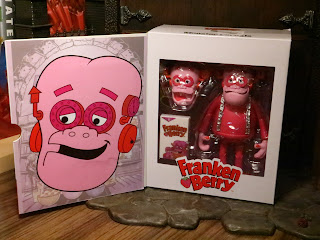 * The packaging on this series is excellent. Rarely does the packaging count as a true positive but these come packaged in really nice, sturdy 5 panel window boxes with a magnetic clasps. They're fairly collector friendly though you'll still have to cut some tape and a plastic tie or two. The box is colorful with lots of great text like a comic-strip on the back and information about the figure where the nutrition facts would usually be. 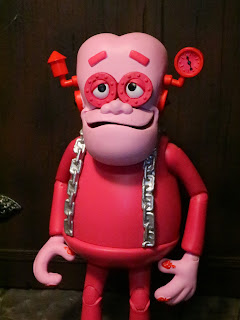 * Franken Berry is big, charming, and bright pink. He looks just like he popped off the front of a box of cereal or like he stepped out of a Rankin/Bass holiday special like Mad Monster Party? This is an excellent, classic interpretation of the character. Most of the figure is very plain with just flat, pink plastic but Franken Berry does have some extra chains that function as suspenders to keep his trousers up. 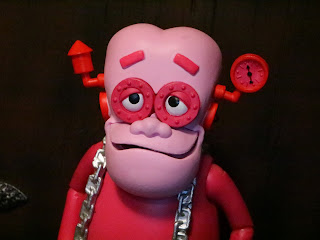 * The portrait is really fantastic. Franken Berry is not my favorite of the monsters but, I don't know.... this portrait is going to be really tough to beat. There's so much detail, Franken Berry has a great, lovable expression, and his eyes are really well done. 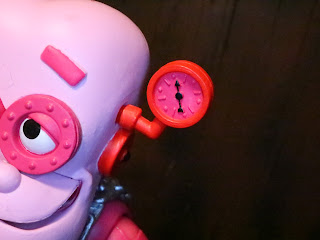 * He also has some steam powered gadgets popping out of his head. There's the steam whistle on the right side of his head and this cool gauge on the left side. Jada Toys did a really nice job on these smaller details! 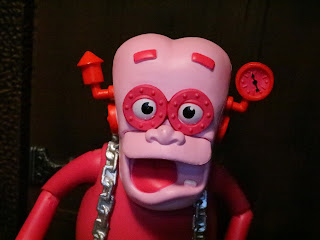 * The second headsculpt has a more expressive look for Franken Berry. He looks really goofy but that's part of the charm. Maybe he's excited about a fresh bowl of cereal? 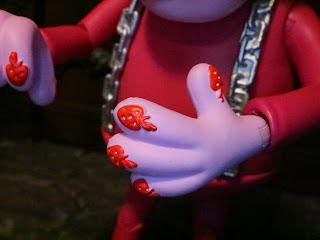 * He's even got the little strawberries sculpted on his fingers. Yes, I've previously lambasted Franken Berry for being kind of lame but, eh, you do you, Franken Berry. Those strawberries fingernails are really sharp with clean paint applications. If he bites his nails do they have a fruit flavor? 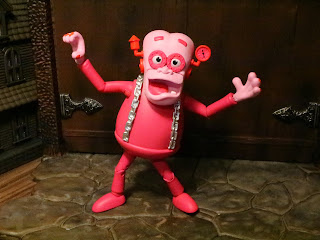 * Franken Berry is no Marvel Legend or G.I. Joe: Classified Series figure but he's quite nicely articulated for a character with somewhat irregular proportions. Lots of swivel/ hinge joints and a great balljointed head and neck do allow for some nice expressions. He doesn't just have to  stand around in a static pose if you don't want him too. The quality feels pretty solid. He's not of the quality or smoothness of a Hasbro figure but maybe somewhere along the lines of a Jakks Pacific offering like something from World of Nintendo. Maybe even a bit better? 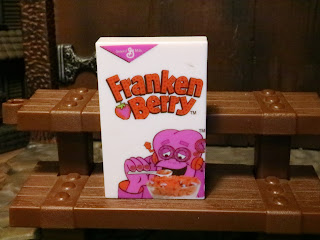 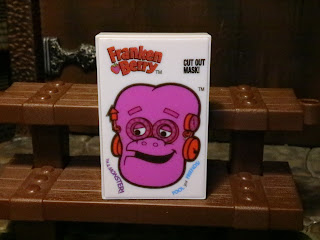 * Flip the box over and you can see the back. Guess what? There's a "cut out" mask! That's a fun little detail. 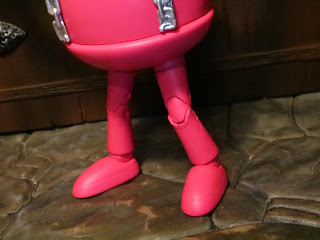 * Like with Count Chocula, I do think that Franken Berry's legs are a bit weak and the joints perhaps a bit too loose. It's tough to articulate animated figures like this as they often have very wonky proportions. A stand might have been a nice extra to include in this set. 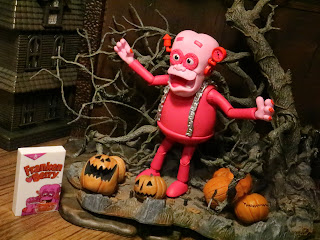 You know what? Franken Berry is even better than Count Chocula. Well, not the actual cereal. I prefer Franken Berry cereal over Count Chocula any day. But in terms of the action figures? Yeah, Franken Berry is awesome. Jada Toys really seems to have some good sculpting, design, and packaging for this series and hopefully they'll continue to refine all of their action figure lines. Franken Berry has two incredible portraits, bold, bright colors, and a small box of cereal. He's an Epic figure and well worth tracking down. Hopefully we'll get the rest of the General Mills cereal monsters soon...