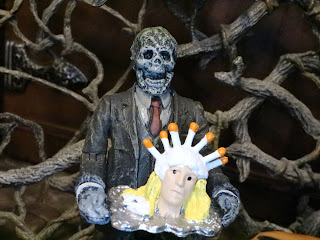 31 Days of Toy Terror: Skeletober continues with what might be the most frightening figure on the countdown thus far: Nathan Grantham from the "Father's Day" segment of the 1982 horror anthology Creepshow. Creepshow is one of my favorite horror movies of all time and it's always a crowd please with its unique mixture of thrills, chills, and laughs. Amok Time Toys has released quite a few action figures from non A-list horror properties and in 2016 they releases this figure as the first Creepshow based figure under their Monstarz line. The figure is called Father's Day, after the segment of the film, but the character in the movie is the vengeful, skeletal corpse of Nathan Grantham, the cruel and abusive patriarch of the Grantham family. Murdered by his daughter, Nathan comes back for revenge and the Father's Day cake he was denied in life! If you've never seen Creepshow, you really need to check it out. Stephen King, George Romero, and Tom Savini team up with a fantastic cast to create a fun, atmospheric movie that pays tribute to the old EC Comics. I received this as a birthday gift last year and decided to save it for a future 31 Days of Toy Terror. Well, here we are! Let's check out the star of Father's Day after the break... 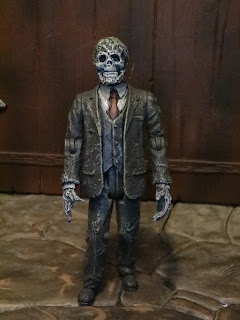 Accessories:2 hands, alternate hands holding a cake, and a stand. 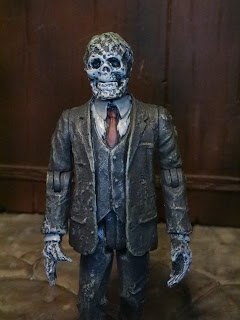 * Nathan Grantham looks really creepy here! He's a 1/18th scaled figure and while these days that usually means figures that are intentionally done in a faux Kenner style that's not the case here. This is a 1/18th figure that feels like something from NECA or McFarlane in the 2000s. The sculpt is quite good with lots of detail on Nathan's grungy, decaying suit. The paintwork is intentionally messy looking which adds to the rotten look of this guy. It's a solid sculpt and it looks quite accurate to the film. 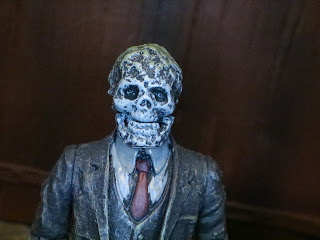 * The headsculpt is also fun. Again, the figure uses a mixture of a decent sculpt (at 3 3/4ths inches it's pretty small) with paint applied a certain way to make this look like a rotting skeletal revenant that's just crawled out of a moldy tomb. The jaw is hinged as well, so you can have Nathan ask for his cake all you want! 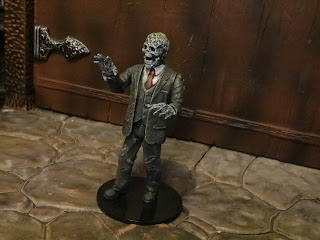 * He's not going to do ninja moves or anything but the figure is solidly built and has enough articulation to get some fun poses out of him. With swivel wrist and hinged elbows you can definitely have some fun posing this guy in different terrifying ways! 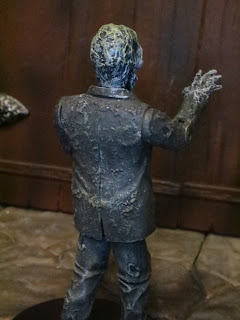 * Here's another shot to admire the paint and sculpt on the Father's Day figure. Nathan Grantham looks truly hideous here, doesn't he? 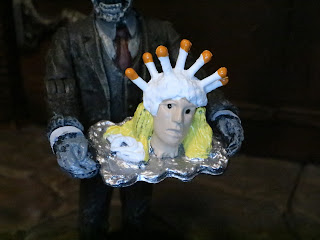 * So, what separates this figure from every other creepy skeleton or gory zombie toy in your collection? Well, it's this platter with a head on it that's been turned into a cake. Yeah. This absolutely happens in the movie and it's from the final scene in the "Father's Day" segment. The detail isn't perfect here but it's a fun accessory that really ties everything together. Nathan's standard hands are removable and you can swap them with this piece that has hands attached to a silver serving tray. The candles aren't as realistic as you might hope for but it's still a pretty crazy looking toy. 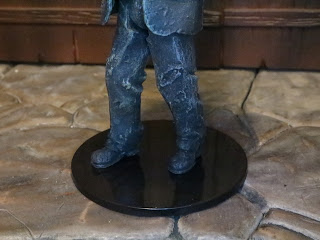 * To help keep him standing (Nathan's an old man!) the figure comes with a black plastic disc stand. There's a small peg which can plug into either foot. You can stand him on his own but he's much more stable with the base. 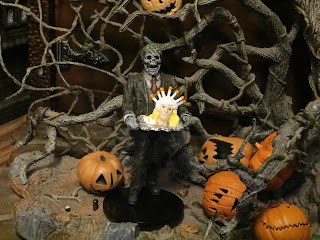 Of all of the Creepshow figures released this one's definitely my favorite (the creature from The Crate is a close second). I don't collect much in the 1/18th scale these days but I was so thrilled that there were Creepshow toys that I decided to pick these up. This is a Great and a 1/2 figure and a fun conversation piece if you're looking to have some really weird conversations. Amok Time seems to still be producing these so if you're looking for one you can still order one from them at retail price. Now... time to go and relax after writing this review. Maybe I'll go have a piece of cake....

This is the first figure of Nathan Grantham I've reviewed. For more figures from Monstarz check out the following:
The Creep (Creepshow)
Dr. Herbert West (Re-Animator)
Posted by Barbecue17 at 10/15/2021