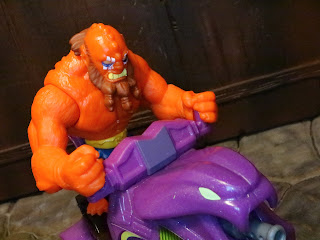 Recently Mattel has put out some vehicle and minifigure combination sets for the Eternia Minis line. There are currently two sets for the MOTU Revelation Eternia Minis and two for the standard Eternia Minis. Today I'm going to kick off my look at all four sets by checking out Beast Man from the MOTU Revelation series. Beast Man comes packaged with the very cool War Sled, which is essentially the Evil Warriors' version of the Jet Sled/ Sky Sled. These do show up during Skeletor's attack on Castle Grayskull in the first episode but it's kind of weird to pair this Beast Man with the vehicle since this is how Beast Man appears when he goes off on his own after Skeletor has seemingly been killed. Let's take a look at the set after the break... 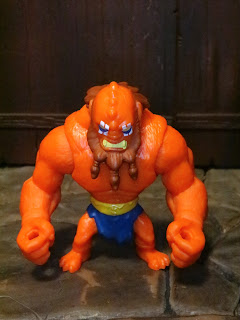 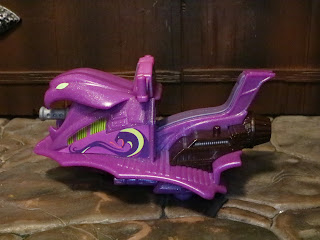 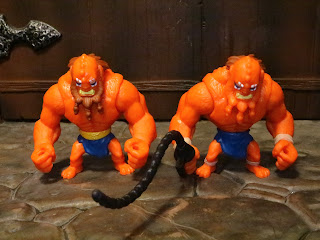 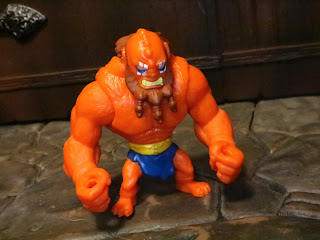 * Considering that these figures are quite small and given minimal paint applications it's more difficult to convey the scars and age that Beast Man has in the show after he's struck out on his own after the death of Skeletor. Still, the paint work isn't terrible at all, just simple. Oddly missing the painted wrist wraps, too. 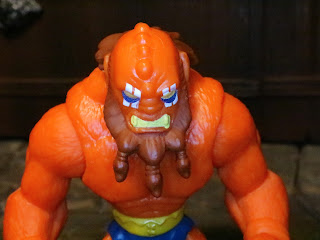 * His head is much more fearsome. I love his face paint and the braided beard which now gets a paint hit on it. His hair is also pretty long in the back so someone was presumably cutting it for him back at Snake Mountain. Now he's just letting it go. Live your life, Biff Beast Man. 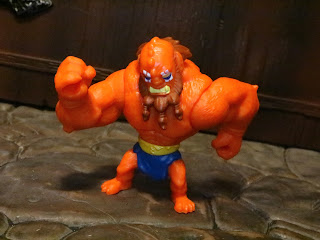 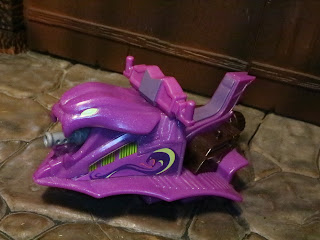 * Let's check out the War Sled! This is a really cool vehicle that's scaled perhaps just a bit too small for the Eternia Minis figures but I do believe that's intended as part of the style. The purple color of the War Sled is quite nice. The plastic even has a glitter mixed in to give it some extra pizazz. There are functioning wheels on the bottom so you can roll it around, too. 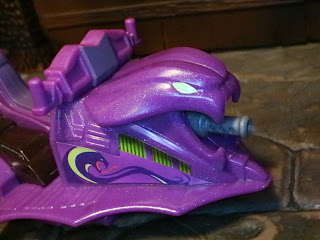 * The War Sled has a serpent themed headpiece with a cannon poking out of the mouth (there are two more cannons under the edges of the War Sled). The snake logos on the sides are pre-applied stickers which look quite sharp. 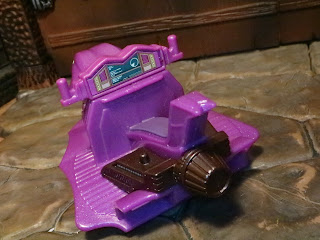 * From the back you can see that the War Sled has a thruster and a ticker for the view scree/ control panel for the pilot. 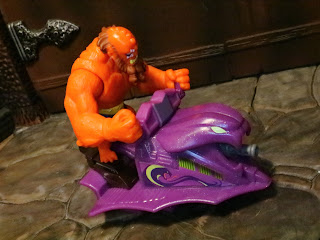 * Beast Man stands on the War Sled quite nicely. There is a foot peg for him to stand on and two handles he can grip. It kind of reminds me of what you'd expect to see if there were a Masters of the Universe kart racing video game. 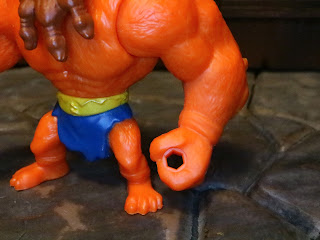 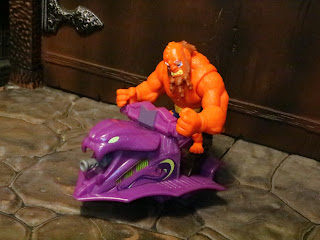 Beast Man and the War Sled is a pretty cool little set. Not the best thing eve but I really like the color and design of the War Sled. It's pretty fun to mess around with and definitely has some nice detail to it. I'm still a bit baffled as to why Mattel left some paint applications off of this guy but gave him some applications that the single packed figure didn't have. That's just bizarre. This is a Good 1/2 set, though, and if you pick it up I don't think you'll be too disappointed. It's a unique take on one of the Jet Sleds/ Sky Sleds for collectors.
I've reviewed lots of Beast Man toys. So many he has his own review archive. Check out Beast Manor for the rest of them.
If you're a fan of the Sky Sled/ Jet Sled/ war Sled I've also reviewed the vintage Battle Ram which had the Sky Sled as a detachable piece, the Mega Construx Battle Ram, the Sky High & Jet Sled set from Masters of the Universe Classics, the Hot Wheels Premium Battle Ram, and the Prince Adam & Sky Sled set from Masters of the Universe Origins.
For more Masters of the Universe: Revelation Eternia Minis check out the following:
Beast Man
Fisto
Metallic Whiplash
Whiplash