Minifigure Review: Trap Jaw from Masters of the Universe by Mega Construx 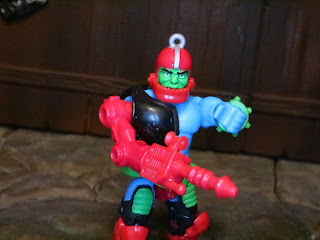 Let's take a look at Trap Jaw, another figure from the most recent series of Masters of the Universe Mega Construx minifigures. Mega Construx first released Trap Jaw in early 2021 in one of the Skeletor head sets where he was packed with the Castle Grayskull laser cannon. That version of the figure was based on his minicomic appearance, however, and is quite different than the Filmation inspired figure we have here. Trap Jaw is definitely a popular guy and I'm sure most collectors of this line are glad to have a more traditional Trap Jaw for their shelf, too. Let's take a look at this stalwart member of Skeletor's crew after the break... 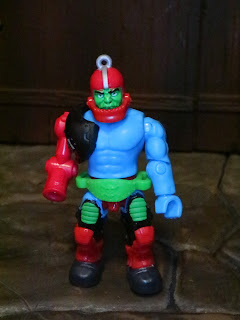 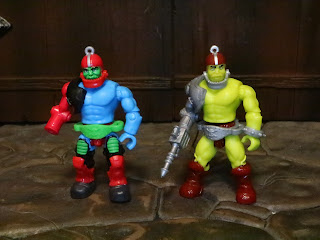 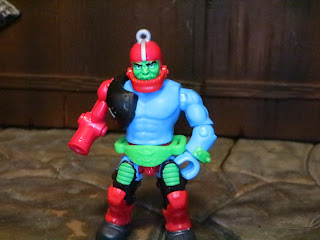 The Positives:
* Trap Jaw is such a great looking minifigure with bright colors that just jump out. Trap Jaw is easily one of the best minifigures in the Mega Construx line. He has the same rubbery belt as the previous figure little slits for weapons and the armored shoulder harness is very well executed. I'm a little surprised Mattel gave him the pink arm instead of the black arm of the vintage toy so maybe we'll see another variant down the road? 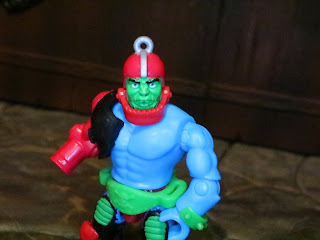 *  The headsculpt is excellent too, especially in this smaller scale. The paint details on his eyebrows and eyes are impressive considering how small they are. He's got the little loop on top for allowing him to glide down a string and an actual hinged mouth that really works. 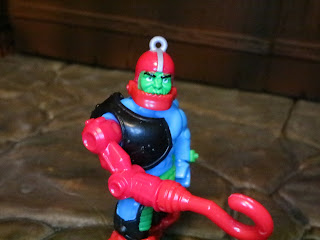 * Trap Jaw's arm doesn't have an elbow joint but it does have a great sculpt and moves at the shoulder and the wrist. It's very cool! Again, the pink/ magenta is very Filmation inspired here. There have been a few Filmation inspired Mega Construx pieces, so someone is obviously a fan. 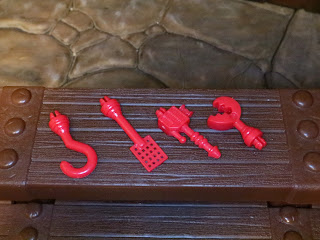 * Trappy comes with four different weapons for his arm. You've got his standard hook, the fly swatter from the Filmation cartoon series, the laser cannon, and a claw. They swap nicely and stay on securely! 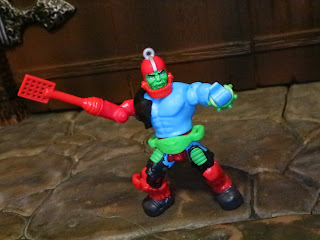 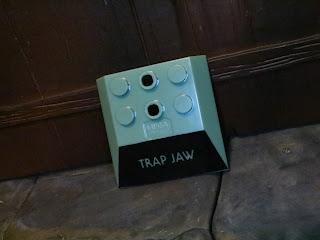 *  Lastly Trap Jaw comes with a stand. It's a simple display stand with his name on it. This is a great little stand for displaying the figure, even if you want to put him in more extreme poses. 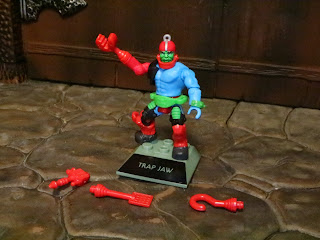 * Trap Jaw definitely is a top five figure for this line. He's colorful, fun, and comes with a nice assortment of accessories to help him in his battle again the Heroic Warriors. The Mega Construx line is definitely shaping up to be one of the best Masters of the Universe toylines ever and it's Epic figures like Trap Jaw that are helping it to gain that reputation. He's a stellar figure and for around $5 dollars there's a ton of fun to be had with this guy. Whether he's blasting at the forces of good or fending off giant flies, Trap Jaw is ready for whatever you throw at him.
Guess what? Trap Jaw now has his own review archive! Visit Trap Jaw's Tourist Trap for all of the Trap Jaw/ Kronis reviews you could possibly hope for!
For more Masters of the Universe Mega Construx reviews check out the following:
Battle Bones
Battle Cat Vs. Roton
Battle for Eternia Collection
Battle Ram
Castle Grayskull
Evil-Lyn (Mega Construx Heroes)
Evil-Lyn
Evil-Lyn (Series 2)
Faker
Fisto
Fisto & Cliff Climber
He-Man & Jet Sled
He-Man VS Beast Man
Man-At-Arms (Mega Construx Heroes)
Man-E-Faces
Moss Man
Panthor at Point Dread
Prince Adam
Roboto
Scare Glow
Scare Glow (Mega Construx Heroes)
Skeletor
Skeletor & Panthor
Stratos
Stratos (Mega Construx Heroes)
Stinkor
Teela
Trap Jaw & Laser Cannon
Wind Raider Attack
Posted by Barbecue17 at 10/22/2021