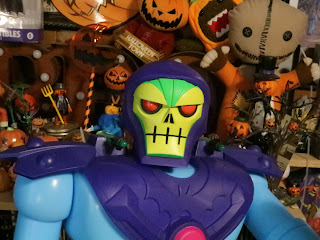 Ready for what's sure to be the biggest review of 2021's 31 Days of Toy Terror- Skeletober? How about we get ready to check out the Shogun Masters Skeletor from Mattel's Mattel Creations initiative? On April 23rd Mattel placed this Shogun Warriors inspired Skeletor up for order, he arrived on my doorstep on June 27th, and I'm now reviewing a little over three months later! Designed by Ruben Martinez and Terrence Higuchi, this version of Skeletor is inspired by the various 24 inch robot toys Mattel licensed and released as Shogun Warriors in the late 1970s. Shogun Warriors are a bit before my time and I've never been very familiar with them but I love Japanese inspired toy designs and the fact that this was supposed to be a mech built by Skeletor really appealed to me. Seriously, it's not hard to encourage me to pick up a Skeletor toy. This guy is quite massive and I was excited when he arrived unannounced on my doorstep back in June. He really is quite huge! Of course, he was also quite pricey. I figured that if I ordered him and didn't like him I could surely resell him but if I skipped out on him and changed my mind he would probably cost a small fortune to acquire. I'm glad I picked him up although I have to admit that he seems like a super niche item where you're definitely paying for his exclusivity. Ready to check out what might be the Great Pumpkin of  Skeletober? Then let's summon the Shogun Masters Skeletor after the break... 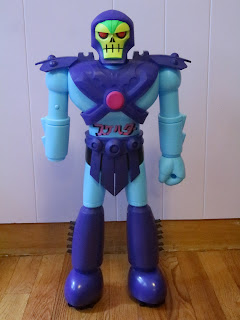 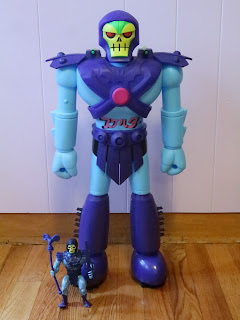 * You want a comparison? How about I compare the Shogun Masters Skeletor to my original vintage Skeletor from when I was a kid! Wow! That's a huge size difference, huh? Seriously, this guy is huge. He's crazy and cumbersome but boy does he stand out. You really could use him as a mech controlled by Skeletor. How cool would it have been if he'd had a cockpit in him for the Origins Skeletor to ride around in? 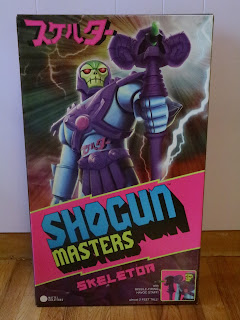 * The box is amazing! It's huge and the design on it is so cool that I'm absolutely going to have to find a way to display it. Now I have to find space for Shogun Skeletor and his massive shipping box, so sheesh! 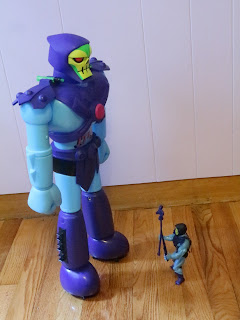 * So I know I just mentioned this above by the size of this piece is very impressive. It's pretty tough to justify the price of a $300 dollar toy but at least when it's nearly 2 feet tall like this guy is you feel like you're getting something for your money. This guy will tower above most of your other collectibles and definitely stands out in the collection. He's hefty but not overly heavy, being made from lighter plastics. 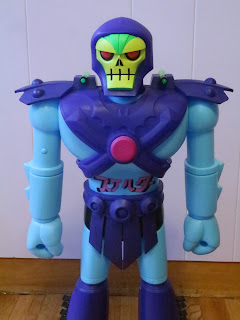 * Do you like Skeletor's design? If so then you're already about 75% predisposed to like this Shogun Masters version of ol' bonehead. Do you like giant robots? Well, there's the other 25%. Giant. Robotic. Skeletor. Mech. That's what you need to know. The sculpt is very cool. It's a very crisp, clean looking toy with great bold colors and lots of cool little floruishes. 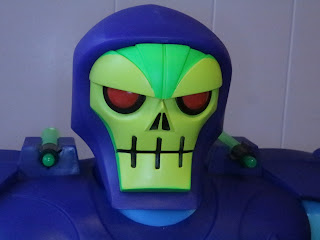 * The headsculpt definitely carries Skeletor's likeness but with a fantastic robotic look. The paint colors are bright with some bold black lines to accentuate his skull-like face. 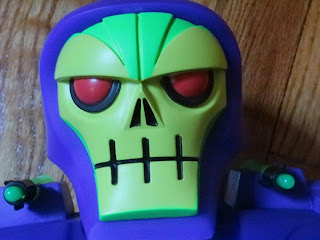 * Here's a close-up of Skeletor's face from Adora! 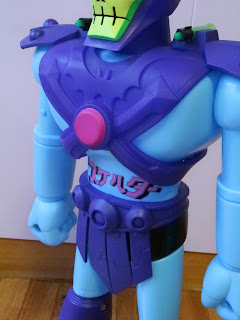 * Here's a close up of the chest and waist armor which do appear to be separate (but non-removable) pieces. They give the sculpt a bit more complexity than it would otherwise have and they really look pretty cool, especially Skeletor's belt. It definitely looks like it's been given some more robotic design elements. 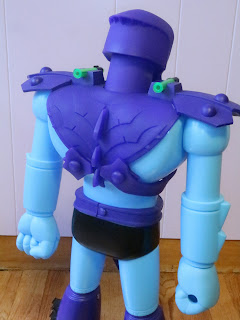 * The back shows off some cool spikes on Skeletor's armor. You've also got some places to store a missile on each of Skeletor's shoulders. 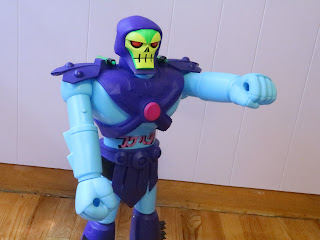 * This isn't a very articulated figure but there are some joints to make it a bit more fun. You can have Skeletor look around and raise his arms to punch his foes. This seems to be in line with the articulation of the vintage Shogun Warriors so I do believe Mattel faithfully captured the style of that line. 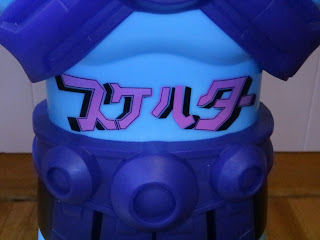 * The tattoo on Skeletor's stomach basically says something like "skelter" in katakana. It's a cool detail that's nicely printed and adds a bit more pizazz to the design. 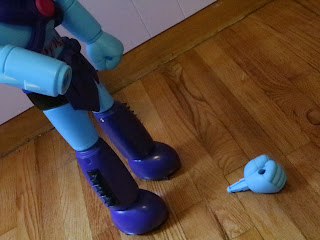 * Apparently one of the Shogun Warriors gimmicks was launching hands which seems to be a staple in giant Japanese robots (one of the Megazords I had as a kid launched his fists, too!) so Skeletor fittingly has a launching right fist. Just press the button on his right forearm and his fist flies...well, it's heavy, so it only flies about 6 inches. It's still kind of cool, though, and a fun feature. 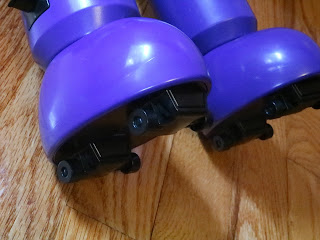 * Another classic oversized robot feature Skeletor has are wheels on the bottoms of his feet. He can roll around! 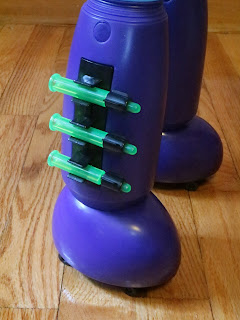 * Skeletor comes with eight missiles that he can store on his person. Three can be stowed on each boot and one on each shoulder. They're made from clear green plastic with a black tip and they look pretty cool on him. They're definitely built more for function rather than fashion, though, but the green complements Skeletor well. 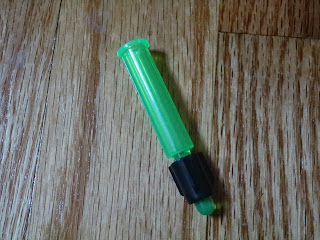 * My daughter/ assistant Adora helped with some of these pictures and here's another one she took of one of the missiles. 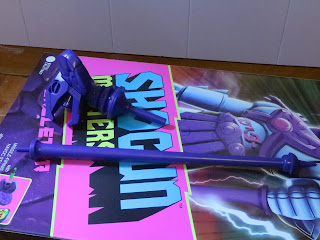 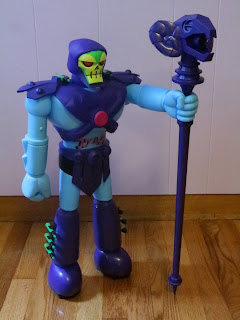 * The Havoc Staff is really tall! It's taller than Skeletor himself! My 7 year old was kind of able to use it as a prop replica piece and was carrying it around for a bit. Only for a bit, though, considering this is not something I wanted to risk getting damaged. 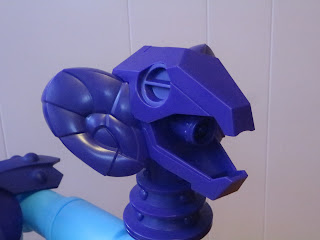 * The head of the Havoc Staff is very cool. It's very geometric looking (it kind of reminds me of the headpiece on the Sky Sled) and does a nice job of capturing the look of the classic design of the Havoc Staff while adding in the mechanical flourishes like the bolts in the eyes and such. 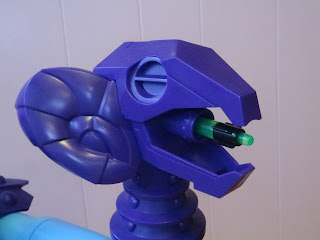 * The missiles fit right in the mouth of the Havoc Staff and ca be launched by pressing down on a button on top of the ram's head. 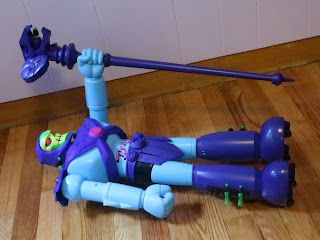 * My only real functional negative of the toy is that sometimes, if you don't have the legs positioned just right, the wheels cause Skeletor to flip backwards. I really would have liked for the wheels to either have been removable elements or for them to be able to go up inside of the feet. I'm freaked out at the thought of my Shogun Skeletor rolling off of a shelf and falling to the ground. 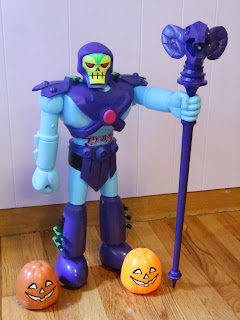 Let me start by just being up front and saying that there's no way that Shogun Masters Skeletor is worth Mattel's $300 asking price. Of course, this guy was limited and sold out in under 24 hours so I guess it wasn't that much of a deterrent. I usually try to factor price in to my reviews of newer product but it's just so darn hard to do here. This is a really cool piece and while it's not the greatest toy it's just undeniably cool and definitely a standout piece for almost any MOTU collection. Realistically this guy feels like something that should have retailed fro around $150, maybe $200. You're paying for the exclusivity. It's a really cool exclusive, though, and I definitely messing around with it and admiring the very cool design. It's a pretty fun piece that ends up being a Good and a 1/2 item. At this point the secondary market is your only real option for this. It will most likely be the largest Skeletor in your collection, though, so that's kind of impressive on its own. Mattel has since released two paint variants of this guy but I skipped those. At $300 a pop that just wasn't doable.