Action Figure Review: He-Man and Ground Ripper from He-Man and the Masters of the Universe by Mattel 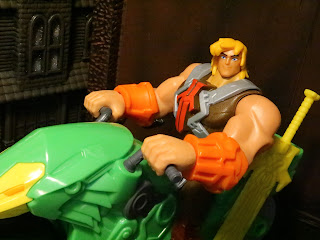 Guess what? It's time to dive into a completely new Masters of the Universe line again with a review of the first figure I found from Mattel's new He-Man and the Masters of the Universe line based on the new kid-targeted Netflix series. While Masters of the Universe is hot, hot, hot right now, most of what we've been getting is based heavily on what's come before: Origins is an upgrade of the vintage line, Revelation is a continuation of the Filmation series with elements of the Masters of the Universe Classics continuity added in, and most product is based on either the vintage toys or the Filmation comic series. The Netflix He-Man and the Masters of the Universe is a completely new take on the MOTU story and since there's currently so much based on the classic stuff right now I'm completely OK with that. I've only watched the first four episodes so far and I have to say that I'm really enjoying the show. It's very different but it's good and it still feels like MOTU to me. Imagine MOTU in the style of a Dreamworks or Pixar film with a team focused vibe. I'll probably talk more about the show in each review but for now let's talk about the toys. These are 100% kid focused with minimal articulation, a "Power Attack" feature that functions like a modern upgrade to the spring swiveling waists of the vintage line, and a lower price point. The first thing from this line I stumbled upon was He-Man and Ground Ripper, which is He-Man on a giant green motorcycle. Does that gives you a better idea of what this line is about and who it's geared towards? The Ground Ripper is the name Mattel is currently using for the vintage Road Ripper (they're also using the name on the vintage inspired Eternia Minis version of the Road Ripper), by the way. Must be a trademark issue or something. Let's dive in and take a look at a new Masters of the Universe line after the break... 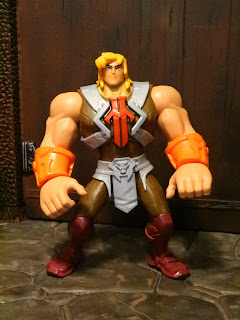 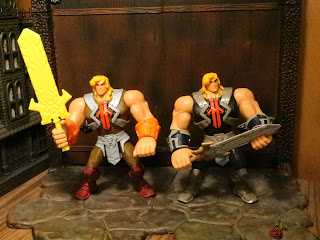 Comparison:
* I've found everyone from the first series of releases at this point except for the single carded Man-At-Arms so while I haven't reviewed him yet here's a shot of the standard He-Man from this line (right) with the version included here with the Ground Ripper (left). The single packed figure has different and slightly more elaborate paint applications than this version. 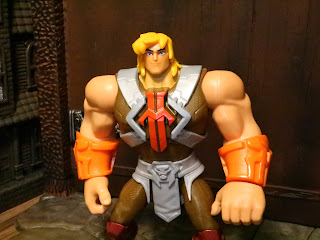 The Positives:
* In this series when Adam transforms into He-Man he bulks up and looks completely different, kind of like the 200x series or Revelation. He's very bulky with exaggerated proportions and more armor and clothing that He-Man is generally known for wearing. I really do like the logo on his chest as it's both a stylized "H" and reminiscent of the Power Sword in this series. The harness isn't removable but it is a separate piece permanently attached to the figure. 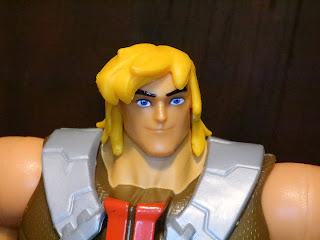 * Mattel gave He-Man a rather friendly face here and it works. It wouldn't have been my choice for the default He-Man look but it's a pretty good likeness of the character. This is definitely He-Man, just with a more stylized look. Big hair, lantern jaw; he kind of reminds me of the 200x He-Man, which I love. 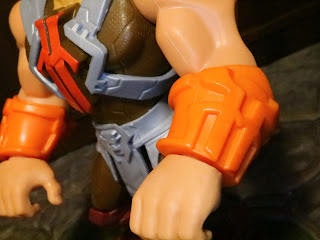 * His gauntlets are really cool, too. They're suitably oversized and also have the new stylized He-Man logo on them. 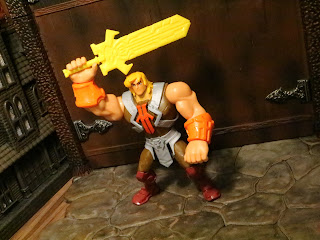 * I don't like that these figures only have swivel shoulders but everything else I'm OK with. He-Man feels very sturdy and the Power Attack feature is pretty cool. Essentially, the mid-torso joint is a spring-loaded balljoint. Twist him left or right and his upper torso springs back. Pull his torso back and he springs forward. It definitely feels like an upgrade of the action waist feature on the vintage figures and makes these fun to mess around with. 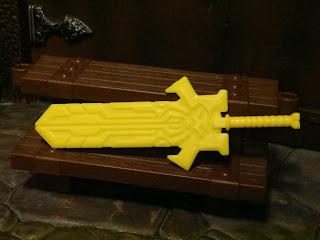 * Also like the 200x series, the Power Sword, or the Sword of Grayskull, is massive here. This version is cast in solid yellow plastic with some nice detailing on the front and back. I like the design though I'm interested to see this in more regular paint applications. 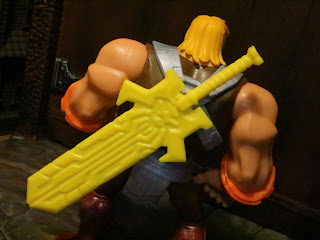 * There's a plug on the back of the Sword of Grayskull that fits into a hole on the back of He-Man's harness, allowing him to tote his sword around and leaving his hands free to ride the Ground Ripper or punch things. 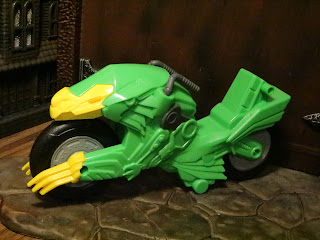 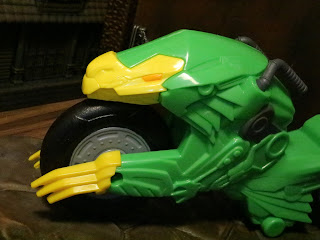 * The headpiece is similar to the vintage vehicle but smoother and more streamlined. There aren't stickers for eyes, either: Just painted yellow eyes on a beak-like face. I really like the claws that are part of suspension. It would have been really cool if they had been removable so He-Man could use them as weapons. 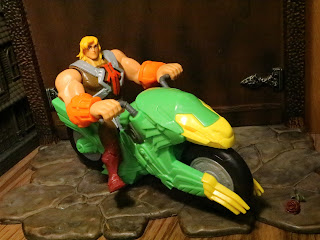 * He-Man fits on the bike just fine. The handlebars can also rotate so they can fit perfectly into He-Mans hands or the hands of any other figure you want to ride it. 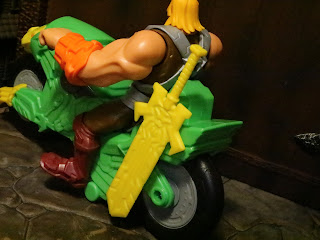 * There's a spot on the rear of the bike where He-Man can store the Sword of Grayskull as well. That's a cool way to hold it while he's riding around on the Ground Ripper! 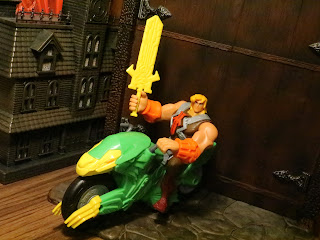 This is definitely not my favorite MOTU line of all time or anything (it's not even my favorite MOTU line this year) but so far it's kind of fun to see something a little different. He-Man's a decent figure. Not perfect but fun and the inclusion of the Ground Ripper is a pretty cool extra. The fact that you can pick this set up for $20 bucks isn't bad at all. That's fairly affordable for what you're getting (especially compared to most other MOTU stuff) and it hopefully strikes kids and parents as just right for gift giving during the upcoming Christmas/ holiday season. It's a Great set and while many old school collectors won't be impressed, it's a solid toy so far.
I've reviewed so many action figures of Prince Adam/ He-Man that he has his own review archive. Check out Fabulous Secret Powers for more He-Man and Prince Adam stuff!
This is the first toy of the Road Ripper/ Ground Ripper I've reviewed.