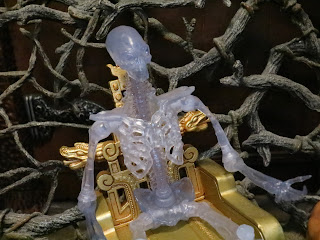 Hasbro's 2008 Indiana Jones toyline has been featured in 31 Days of Toy Terror before and this year it's back for 31 Days of Toy Terror: Skeletober! There were actually a couple figures from this line I considered choosing for this year's festivities but I ultimately decided to go with the mail-away exclusive Crystal Skeleton with Throne from Indiana Jones and the Kingdom of the Crystal Skull. I loved the Crystal Skulls as a plot point in the film (though the ending of the film gets a bit too surreal for me) and I was thrilled that Hasbro released this figure back in 2008. The Crystal Skeleton was released as a mail-away exclusive which required you to attach six stickers from the 1/18th scaled Indiana Jones line to the "Ticket to Adventure" booklet so you could mail away for it. Those stickers and $5.99 for shipping and handling allowed you to acquire the Crystal Skeleton which arrived in a cool box that looked like a wooden crate addressed to Indiana Jones. While largely dismissed as being products of European creation from the mid-19th century created to profit from interest in ancient cultures, crystal skulls still are a popular part of popular culture with a role in the New Age movement and pseudoscience. They're just kind of bizarre and make for a fun MacGuffin for supernatural adventure stories. Let's take a look at this MacGuffin after the break... 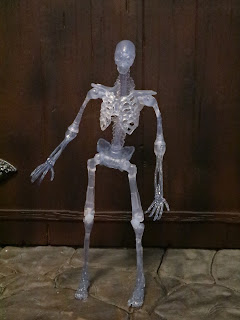 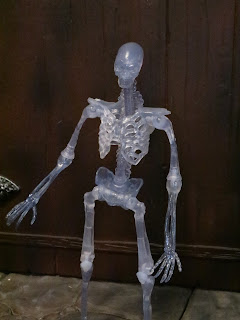 The Positives:
* The Crystal Skeleton is quite tall at 5 3/8ths inches (the Indiana Jones line is 1/18th scale) but that's fitting since these are alien skeletons and they look pretty tall in the film (there are supposed to be thirteen of them if I recall). The skeleton is molded in translucent blue plastic that nicely mimics what is seen in the film and there's quite a lot of nice detail. It's a very unusual figure and it really stands out in the Indiana Jones line. 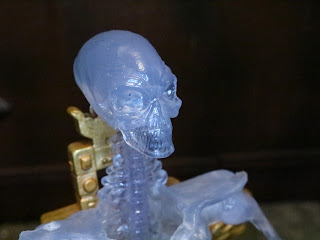 * The head is pretty cool, too. It's a great sculpt that looks pretty similar to the movie prop. There was an Indiana Jones figure that came with a Crystal Skull accessory and a Crystal Skull artifact included with the Irina Spalko figure but this is the most detailed. I suppose you could remove it if you were super careful and used the boil and pop method or something but I'm not willing to try on mine. (Having a skeleton with the head missing is part of the movie and not just something random I'm making up, by the way). 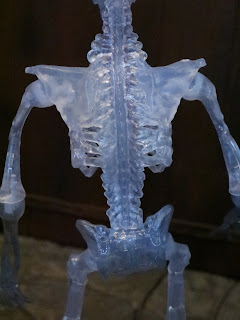 * Hasbro really did an excellent job with the sculpt here. It's really quite sharp and crisp which is pretty impressive considering this was a mail-away for a mass market toyline from 2008. I love all of the bony details here! 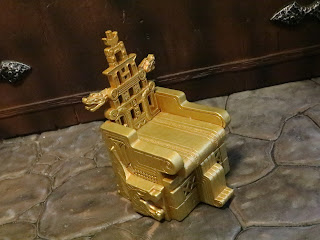 * The throne that the Crystal Skeleton sits in at Akator is pretty awesome. It's a huge, solid piece with an amazing gold color to it. It's an impressive accessory and it looks very faithful to the movie prop. 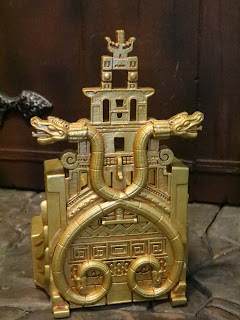 * The detail is excellent on this. Seriously, this is some gorgeous work from the Hasbro team. This would be acceptable in a modern toyline now and considering it's from 2008 it's all the more impressive. 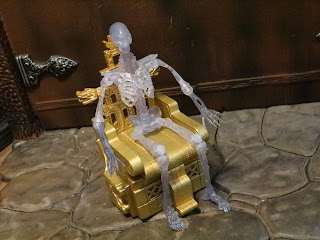 * The Crystal Skeleton has a decent amount of articulation and what's here (swivel/ hinge hips, knees, and elbows) has a great range of motion. Of course, the most important thing you'll want to know is if you can have the skeleton sit on its throne. The answer is yes and it looks fabulous lounging on the throne. 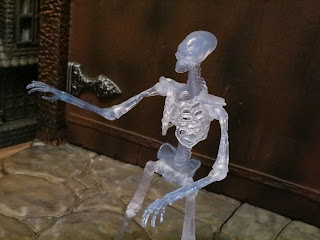 The Negatives:
* The figure doesn't feel brittle but it's definitely very thin. It seems turdy enough but do be careful with it if you pick one up. 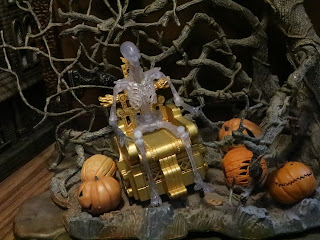 The Crystal Skeleton with Throne definitely isn't one of the first characters/ props/ artifacts you think of when you think of the Indiana Jones films but Hasbro did a fine job with it and it made for a cool mail-away exclusive. You don't see many of those these days although I guess since most toys have to be purchased online anyways the thrill just wouldn't be the same. I love Hasbro's Indiana Jones line and I wish it would have continued on for a bit. it had some fascinating pieces, though, and this is one of the more unusual looking ones in the line. It's a Great piece that's just cool on its own or enhances a display of the Kingdom of the Crystal Skull figures.
This is the first figure of the Crystal Skeleton I've reviewed. For more Indiana Jones reviews check out the following:
30th Anniversary Set (SDCC 2011 Exclusive)
Indiana Jones with Ark
Mola Ram