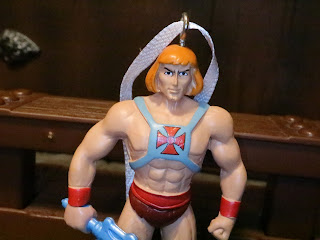 It's October and that means it's time for... Christmas decorations? Yes, indeed. My birthday was at the end of September and I ended up getting three Masters of the Universe Christmas tree ornaments as part of my gifts. When has there ever been that much MOTU stuff out at once? Seriously, 2021 seems to have as much MOTU product released as during the best years of the 1980s! Today I'm checking out one of the two standard Hallmark ornaments that are currently available at a variety of stores (mine was found at Walmart) and it's He-Man, the most powerful man in the universe! Hallmark released a He-Man ornament in their Hallmark Keepsake collection in 2016 which has gotten crazy expensive so it's nice they've put out another He-Man as a very affordable price. We're still about a month from putting up the Christmas tree but let's get things ready with a look at He-Man. Join me after the break... 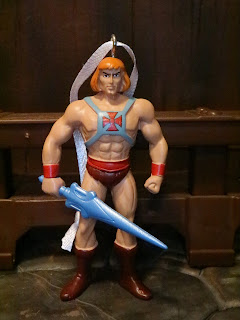 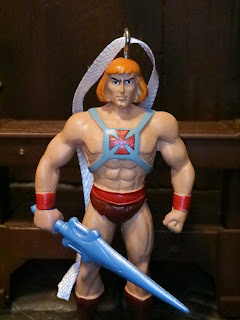 * This is a very Filmation looking He-Man and I love it. Not perfectly Filmation but pretty close. Honestly, he should make most MOTU fans happy. I love how classic he looks with bold colors and pretty clean paintwork for a Christmas tree ornament. He's also ripped. If you have a more jacked ornament on your Christmas tree than He-Man I'd be surprised. 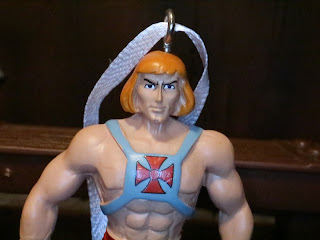 * The headsculpt is pretty good. He-Man looks like He-Man with blonde hair, dark eyebrows, and a fairly pleasant face. He looks like he's just about to share with you the value of friendship or why not to stick your arm in the garbage of disposal. 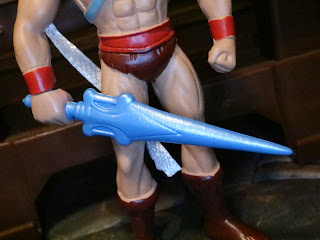 * I'm liking this Power Sword! It's very Filmation and I love the design of the blade. The sword is definitely more grayish in person than it looks in my picture (where it looks like it's glowing blue). it matches his harness in actuality. 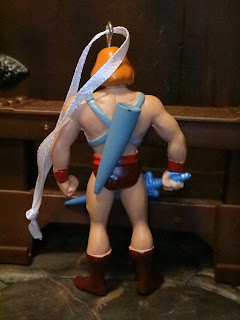 * His sheath is on the back of his harness so he's got a place to put the Power Sword if he decides to help wrap some gifts or good-naturedly arm wrestle Santa Claus. He also has a white ribbon attached to hang him from the limb of your Christmas tree or wherever else you'd like to hang him. 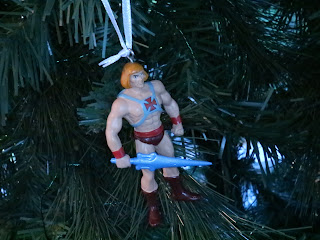 For $8 bucks this is a fantastic He-Man Christmas ornament! I'm really excited to add him to the tree this year! I don't usually review Christmas tree ornaments but anything MOTU obviously gets a pass around here and I also want to make sure y'all get a chance to look for these before stores are out of them. These tend to be on little end caps at Walmart near the greeting cards and party supplies so check there. This is a Great little find and should definitely add some fun to your Christmas display. Now I'm just imaging a series of videos where John Irwin's He-Man does the Advent readings at church this year. Man, that'd be just fantastic.

I have reviewed so many action figures of He-Man/ Prince Adam that he has his own review archive. Check out Fabulous Secret Powers for more He-Man reviews than anywhere else on the internet!
Posted by Barbecue17 at 10/11/2021