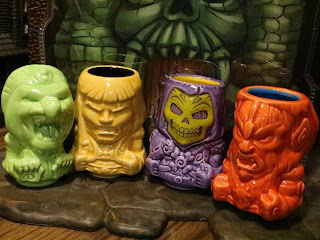 It's Saturday and during the past few years of 31 Days of Toy Terror I've used that as a day to show off something that's a little outside of the regular theme. Well, today I'm kind of going with something that somewhat matches the theme and something that is a bit of a stretch. What do I have today? How about four mini Tiki muglets from Geeki Tikis! I reviewed the full sized Tiki mugs earlier this year but I was surprised with this cool set of Mini Muglets for my birthday last month. You get 2 oz mini Tiki glasses of Battle Cat, He-Man, Skeletor, and Beast Man all contained inside of a very cool Castle Grayskull shaped container. You're getting two skulls today (Grayskull and Skeletor) and a beast man named Beast Man for your Halloween horrors and I'm throwing in a He-Man and Battle Cat review because it's who I am. Both tricks and treats! These are Walmart exclusives and have been available on an endcap in electronics over the past few months along with other Masters of the Universe items and some other Geeki Tikis stuff. Let's check these cool little fellows out after the break... 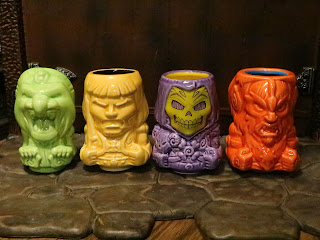 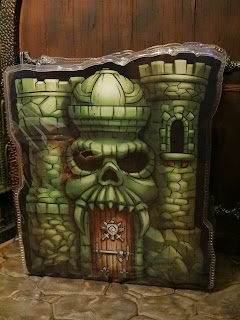 The Positives:
* First I want to show off the nice clamshell styled case these come in. On the back is the "packaging" part of the set which shows the mugs inside. The front is a neat image of Castle Grayskull that just looks fantastic. It's easy to open the packaging and pull these little guys out for use then return them for storage. I'm planning to keep mine out on display. I'll honestly be displaying them and the package as well since it all looks fantastic. 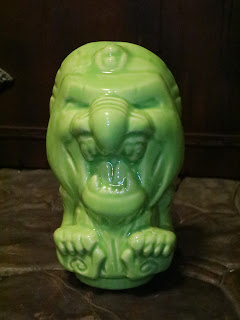 * First up let's take a look at Battle Cat! I reviewed the full sized Battle Cat already but this little version is pretty cool, too. The sculpt isn't as sharp as on his big brother but this is still a pretty neat little mug. It'd be fun to take this to my favorite Chinese restaurant and drink hot tea out of it. I assume they'd let me bring my own mug, right? 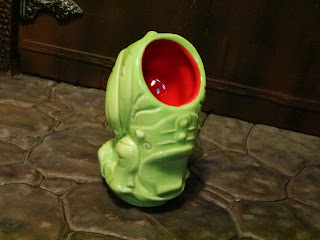 * The rim of the mug is designed at an angle on Battle Cat. It works for the design of the mug but I would imagine it would be hard to drink out of. That hot tea would go everywhere! 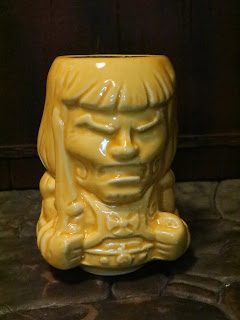 * Here's He-Man! The He-Man mini muglet looks pretty close to the regular sized He-Man Tiki mug but smaller. You can pretend he's one of the tiny He-Mans from the Filmation cartoon series or the Tappers of Grayskull He-Man from the Masters of the Multiverse comic. Or, you know, just use him for having tea parties. His harness isn't painted like on the larger mug but I kind of like the unpainted look best. 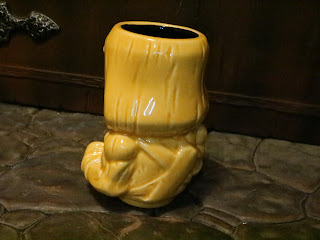 * The mug is nicely detailed the entire way around. I love the harness and scabbard for He-Man's Power Sword and the detail on the hair. 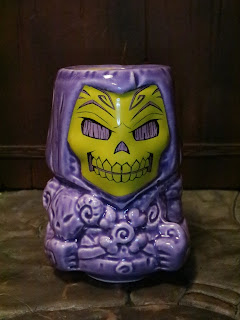 * Hey! Here's Mr. Skeletober himself! Yup, we get a mini Skeletor muglet here and he looks awesome. I reviewed the regular Skeletor Tiki mug and this little guy makes a great companion piece. He looks so darn cool with an amazing color of purple used for the mug. I'm also really liking the painted face. I'm not always loving painted details on Tiki mugs but here it works. 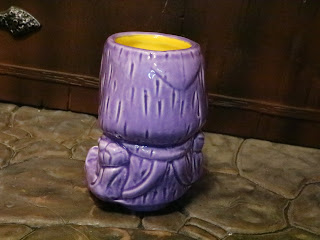 * Around the back of the mug you can see the back of Skeletor's hood and the straps for his armor. The sculpting is quite nice on these and they just look fantastic displayed on a shelf. 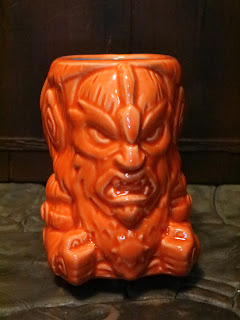 * Beast Man is new to Geeki Tikis and didn't appear in the first series of releases. He looks really cool, especially that wild orange color used here. It's a nice mix between the red and orange colors on the regular character. His face is pretty menacing here and covered in detail. 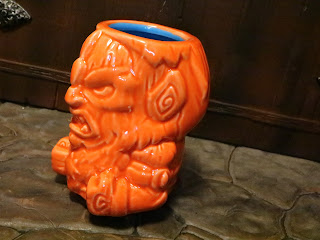 * I like the swirls on his ears and how his furry collar juts out in the back. You can also see bicep spikes. I wonder if we'll get a full sized Beast Man Tiki mug in the future? 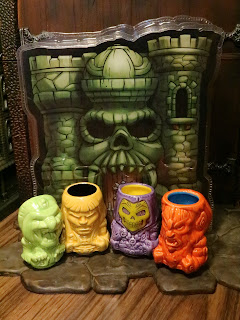 For less than $10 dollars a mug this is a pretty cool set. Maybe a bit more expensive than you'd expect but with the quality of the four muglets and the nice box for storing them in it's a very strong set. It's really fun to stumble upon stuff like this. These aren't just traditional toys or action figures but something quite unique. Beeline Creative Inc. has been doing a great job on these and I'll absolutely admit that I wouldn't be opposed to a second set showing up next year. The 4pc Mini Muglets set is a Great item and well worth tracking down. Walmart.com still seems to have these in stock, too, so if you're looking for something fun for your kitchen or collection give these a look.

I've reviewed so many toys of Beast Man, He-Man, and Skeletor that they have their own review archives: Check out the Beast Manor, Fabulous Secret Powers, and Snake Mountain for reviews of more toys based on those characters!