Minifigure Review: Tri-Klops from Masters of the Universe by Mega Construx 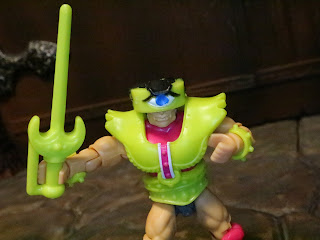 It's time for the fifth and final review from the newest series of Masters of the Universe minifigures from Mega Construx and who are we looking at today? Tri-Klops! Tri-Klops was previously released in the Battle Ram set earlier this year in his classic look so to change things up a bit this single carded version features a color scheme for Tri-Klops that is similar to his appearance in the vintage minicomic "The Terror of Tri-Klops." Tri-Klops is sporting a pretty loud outfit with pink and neon green, so how did he turn out? Let's check him out after the break and see if this style works for him... 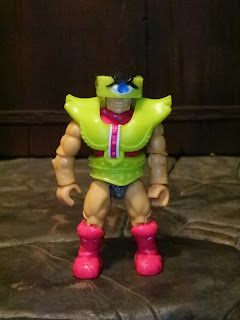 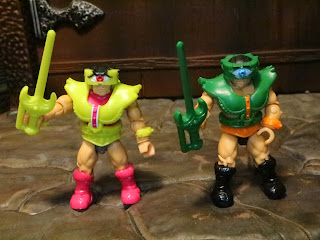 Comparison:
* Here's a comparison between the minicomic styled Tr-Klops (left) and the Tri-Klops included with the Battle Ram (right). Mattel didn't sculpt any new parts for the single carded Tri-Klops but instead just painted him in the minicomic colors. He's quite loud (G.I. Joe Battle Corps called and told him to turn those colors down) and I'm not loving the look of the figure. He's unique, though. 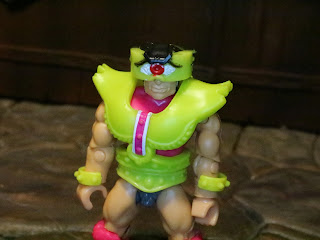 The Positives:
* Tri-Klops is sporting his standard armor with a pink and white stripe overtop of a pin painted torso. Again, it's not truly accurate to the minicomic appearance but the color scheme is immediately recognizable. He's also sporting some neon green wrist cuffs on both wrists. 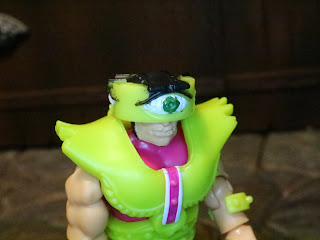 * Tri-Klops features a working visor! The visor rotates perfectly to show off his three different enhanced eyes with the Distavision, Gammavision, and Nightvision features, all with different eye colors. It's a solid headsculpt and a fun feature, especially on a figure so small. 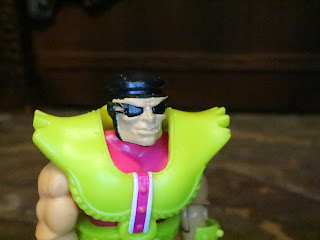 * Check this out! Pop off the visor and you can see the weird plugs that go from Tri-Klops' eye sockets to his visor! That's a detail from the MOTUC figure and it's cool to see it here, too. 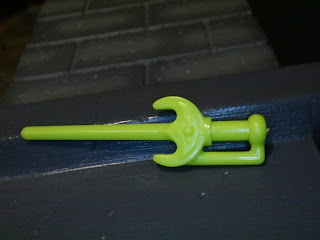 * Tri-Klops shares a sword with Fisto but while Fisto gets a super elegant purple sword, this version of Tri-Klops is toting around a giant, razor sharp glowstick. Imagine him with a pair of these at an Eternian rave! 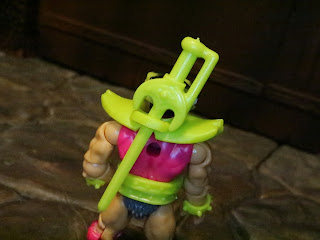 * Tri-Klops' sword easily fits into a loop on the back of the figure. Keen! 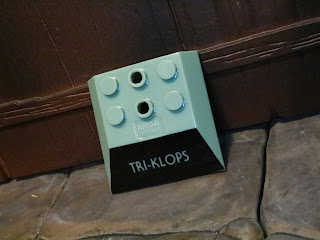 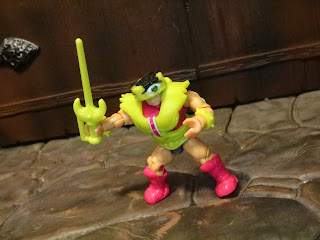 * Like the rest of the figures in this line Tri-Klops is well articulated and ready for battle. These really are some of the nicest minifigures out there and they're incredibly fun. If you haven't picked up one yet and you're either a MOTU fan or a minifigure fan, you really need to. They're exceptional. 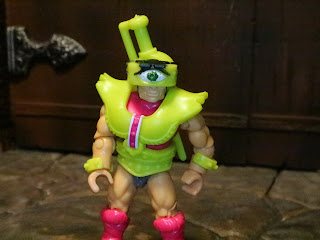 The Negatives:
* I'm really just not loving the colors here. I get what Mattel was going for but I feel like things should have been darkened up a bit or Tri-Klops just needed a new piece of armor. He's a repaint, yeah, but he's not a very visually appealing one. And I'm a guy who likes Disco Skeletor! 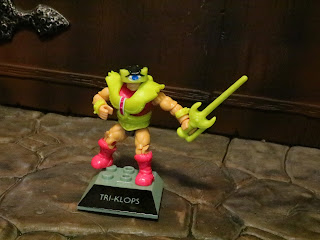 Listen, despite not really feeling the color scheme here this is still a really cool little figure. He still gets a Great from me as he's fun to play with, has a working visor, and even has his creepy eye socket attachments underneath his visor. Had the colors been a bit darker he probably would have scored even higher. Still, he's a solid minifigure and I'm sure lots of folks are anxious to pick him up. The Minicomic inspired Tri-Klops won the MOTU Origins fan vote (I'm going to be reviewing him soon, too) so this guy has his fans for sure. If you've been asking for this look how do you feel it turned out?