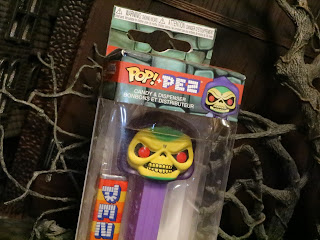 I love that 31 Days of Toy Terror is such a potpourri of different toys and this year, even with the skeleton/ Skeletor theme, I'm still able to showcase a great variety of cool stuff. Today I've got another cool Skeletor item: The Funko POP! + Pez dispenser from 2019! I've reviewed many of the Masters of the Universe POP! + Pez dispensers in the past but I never got around to checking out Skeletor. Isn't a spooky skeleton who gives out candy about the most Halloween thing you can think of? Let's check him out after the break... 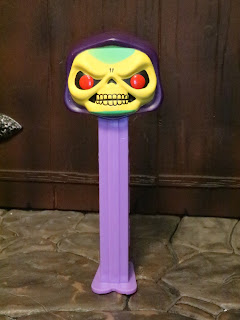 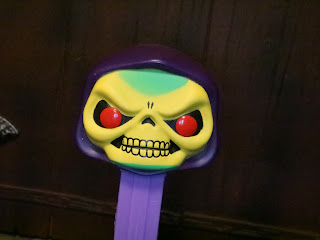 The Positives:
* Skeletor just looks incredible in POP! form, doesn't he? I love the round red eyes and the way the teeth are outlined in black. It's such a colorful and fun depiction of Snake Mountain's favorite son! 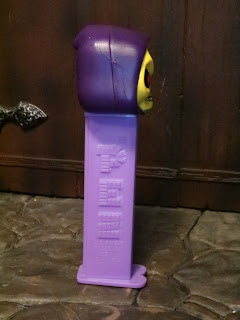 * The dispenser bodies in this series are exactly the same as any other Pez dispenser I've ever seen. Skeletor's body is a lighter shade of purple than his hood and it fits with him pretty well. 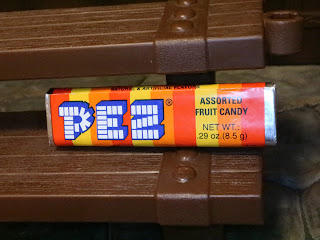 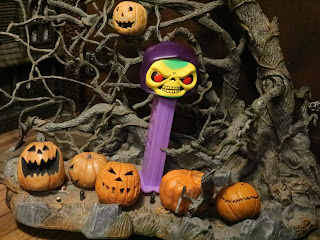 What you see is what you get with the Funko POP! + Pez dispensers and this is just what it looks like: A Skeletor Pez dispenser. That's pretty cool, though. The head looks great, the dispenser is functional, and there's Pez candy inside. What's not to like? Pair him with that regular Pez dispenser that kind of looks like Scare Glow and you've got a super cool team up for your Trick 'r Treat pail. This is a Good and a 1/2 Skeletor item for your collection and, luckily, you can find him pretty cheap these days.
I've reviewed so many toys based on Skeletor/ Keldor that I've given him his own review archive. Check out Snake Mountain for a plethora of Skeletor reviews!
For more POP! + Pez reviews check out the following:
Evil-Lyn
Kobra Khan & Spikor
Moss Man
Orko
Stinkor
Trap Jaw
Trap Jaw (Lavender Stem)
Tri-Klops