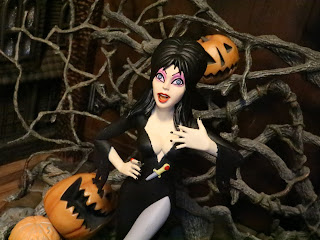 It's another Saturday which means we're going off topic for today's installment of 31 Days of Toy Terror! No skeletons today! Instead we're checking out a new toy of Elvira, Mistress of the Dark and the Queen of Halloween. This time it's Elvira in an animated style from NECAs Toony Terrors line! I found her at Target a week or two ago and have been pretty excited to show her off. 2021 is the 40th anniversary of Cassandra Peterson's development of the Elvira character and NECA is celebrating by including her in the Toony Terror line so she can take her place alongside of many other horror icons. This has been a fun line to cherry pick over the last two years as not every release is from a property I care about but the animated style makes the characters I love really stand out. Let's get ready to hang with the queen of Halloween after the break... 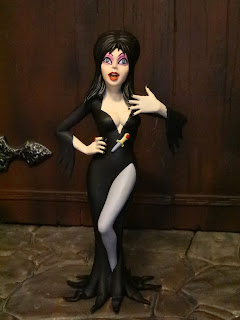 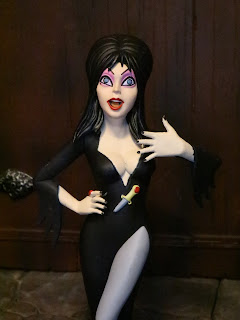 The Positives:
* Elvira is already over the top and she fits perfectly in the Toony Terrors style. Imagine if an Elvira cartoon had existed in the 1980s; that's what you're getting here! Her simple black dress is sleek and simple with her left leg revealed just slightly. 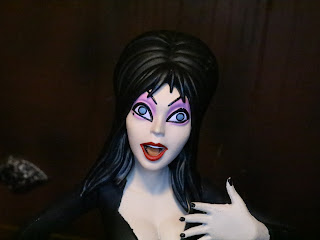 * The headsculpt is a lot of fun and really conveys Elvira's bubbly yet macabre personality. The sculpt is really nice, capturing all of Elvira's features, and the paintwork on her eyes and mouth is super neat and clean. Her hair is perfect too! She's a real dream! 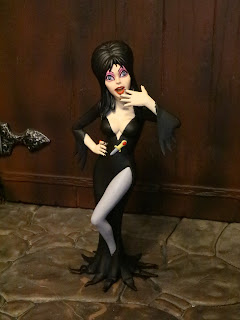 * Since these figures don't have much articulation the poses are really important. Elvira's is really good as she looks surprised or amused in a way that definitely reflects her Valley Girl personality. She's also posed with her feet hidden, obscured by the tendril like bottom of her dress that functions as a stand. 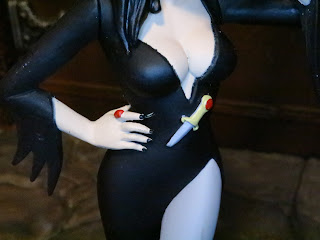 * In keeping these simple like vintage cartoon designs NECA only added simple details to the figures. Elvira's ring and her iconic dagger are both included and make for neat little eye-catching elements. 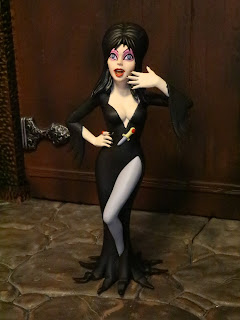 * Elvira does have a little articulation. You can rotate her shoulders to get a few different poses as well as move around her balljointed head. That adds a lot of expression to her pose and makes for a much more fun figure. 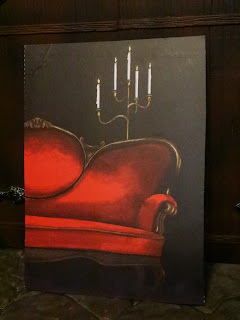 * Like the rest of this series, Elvira comes with a cardboard backdrop that you actually cut out from the back of the package. Hers is her iconic red couch with a candelabra nearby. The design definitely looks like it could be the static background from a cartoon though the couch seems pretty large compared with the figure. These are kind of a fun touch that remind me of the cardboard backdrops that came with various toylines of the late 80s and early 90s, such as Monster Force. 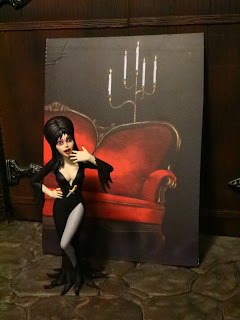 The Negatives:
* Like with the rest of the Toony Terrors releases I'd really like for NECA to include a stand of some sort to hold up the cardboard backdrop. Seriously, just adding on a slit on a symbol disc base base would have been really nice so the backdrop could actually just stand up behind the figure. 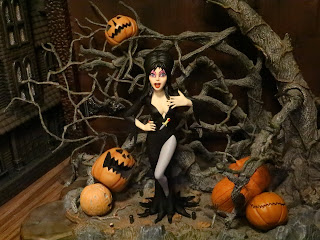 I'm a big Elvira fan and it's really exciting that NECA worked her into this line. So far most of the characters that have appeared have been maniacs, clashers, and monsters, so Elvira is a nice change of pace. She's also just a perfect character to blend with the aesthetic of this line. These are definitely made for display rather than actually posing and playing with but they look excellent together as a group. Elvira is a Great addition to the line and gives me some hope that we'll see more "non-monster" characters in future series.
I've reviewed a couple of other Elvira collectibles: Elvira (Witch Variant) figure from 1998's Elvira, Mistress of the Dark line by Figures Toy Co., the Funko POP! Elvira #375, and the Rock Candy Elvira.
For more Toony Terrors from NECA check out the following:
Ash
Freddy Krueger
The Grady Twins
Jason Voorhees
Leatherface
Michael Myers
Sam
Posted by Barbecue17 at 10/23/2021