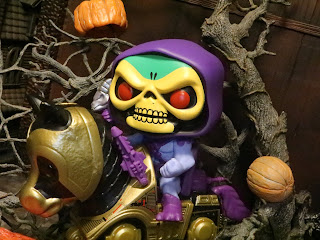 I've always been a fan of Washington Irving's The Legends of Sleepy Hollow and its many film and television adaptations and I've reviewed some toys based on the story in the past. For today's installment of 31 Days of toy terror I'm checking out another spooky, supernatural rider: Skeletor on Night Stalker from Funko's POP! Rides series. OK, yeah, I'm stretching things a bit here, but since this year's 31 Days of Toy Terror celebration, Skeletober, is focusing on skeleton themed toys ol' Skeletor definitely has a place here. This set was released in July of this year and is the third riding Skeletor released in the POP! Rides line after both variants of Skeletor on Panthor #98. I think most MOTU fans probably associate Night Stalker with Jitsu but due to the vintage gift sets but Funko put Skeletor on here. I'm not going to ding them for it or anything but it is definitely less preferable to have Skeletor on here versus Jitsu but if we had gotten Jitsu we wouldn't have this skeletal rider as part of Skeletober, would we? Let's check this set out after the break... 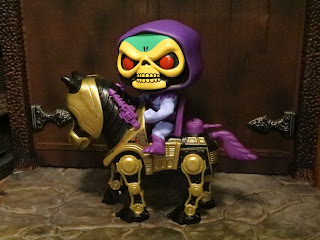 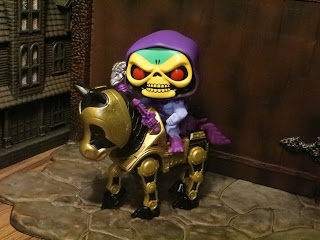 The Positives:
* This is a pretty large POP! Night Stalker is quite heavy, definitely making for a very solid chunk of plastic. Skeletor, while not removable, is a separate figure sitting on top of Night Stalker. Honestly, he might be the same figure as the Skeletor riding Panthor with his arms posed at different angles. 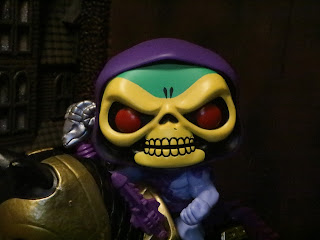 * I really am a huge fan of this Skeletor portrait. The yellow and green mixture on the skull really give it a fantastic vintage look and the dark lines around the eyes and teeth highlight old bonehead's features perfectly. It almost has the look of a sugar skull design which is brilliant as those were one of the inspirations for the original Skeletor design. 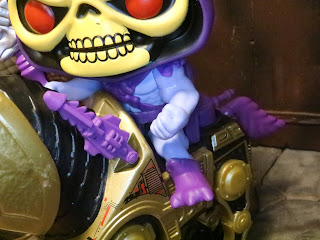 * Again, I really think this might be the same body as the Skeletor riding Panthor. This is a very classic looking Skeletor and while he's not removable he's a separate piece attached to Night Stalker saddle. In the vintage toyline figures actually rode inside of Night Stalker (he had a cockpit) but Funko took some creative license here and has Skeletor mounting him like a regular horse. The sculpt and paintwork on Skeletor looks very accurate and vintage inspired here. 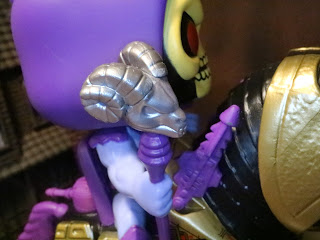 * Skeletor is toting his Havoc Staff which looks pretty sweet. The detail is really nice and sharp on the headpiece, especially due to the pewter paint job that really brings out the detail. 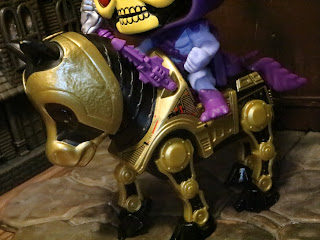 * Night Stalker turned out really well. I'm sure he'll turn up repainted as Stridor at some point and I'm completely down with that. The details on this figure are quite nice with lot of rivets, textures, and circuitry in all of the right places. The gold and black color scheme looks fantastic, too. I'm glad they actually used a true gold color on the paint and not yellow like they used on the most recent She-Ra. 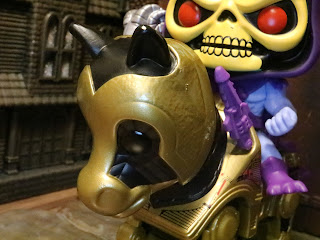 * Night Stalker is kind of cute, isn't he? He might fit in just fine with all of the Funko My Little Pony: Friendship is Magic vinyl figures from a few years back. My daughter has claimed all of mine now so I guess I'll just have to have Night Stalker hang out with Battle Cat and Pantor. 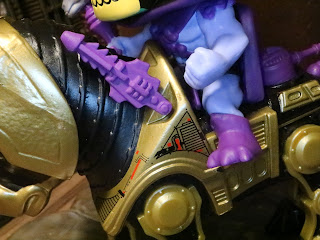 * There are various panels of circuitry and such that are printed on the side of Night Stalker. That's a type of detail I can't recall seeing on any other POP! vinyl figures off hand so it's kind of cool. The laser turrets look pretty cool, too. They're positioned upwards, presumably to fend off Sky Sleds and Wind Raiders attacking from overhead. 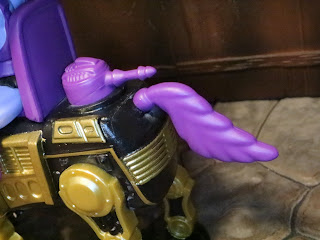 * The back of Night Stalker has not only his purple tail but also his purple tail gun. It doesn't rotate like on the vintage toy but it looks great. I've always loved this detail! 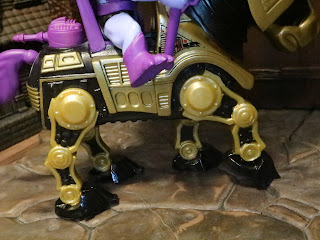 * Lastly, the legs are very nicely sculpted. The mechanical joints look really cool and definitely give off the illusion that Night Stalker is capable of moving just like a real horse. 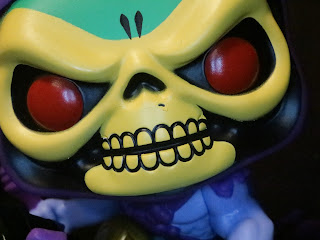 The Negatives:
* I love this Skeletor portrait buy mine has a weird bit of black paint slop between his teeth and his nose. A beauty mark or a simple QC error? You be the judge. Oh, wait, maybe it's one of those marks like in the story where some teenager discovers what they think is a zit on their face but it ends up swelling and getting larger and larger until it burst open and baby spiders come crawling out!
OK, I'm going with just a QC error. Halloween has me all worked up I guess. Too much candy and adrenaline. 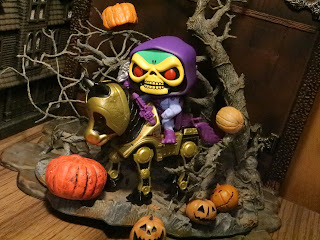 Skeletor on Night Stalker might be one of my favorite POP! vinyls ever. Not only is is a cool, stylized depiction of a classic Masters of the Universe toy with an excellent Skeletor figure on it but it's just a really nicely detailed display piece. Better yet, I scored mine off of Funko's online shop for $20 bucks which seems like a real deal (most places are selling him for around $30). He's not the spookiest toy this year (I know that this year is kind of lacking in really scary toys for the most part but I love Skeletor too much) but he's a really high quality POP! vinyl that definitely warrants an Epic rating. I do hope the inevitable Stridor ends up with Fisto as a rider, though. Those two oughta be inseparable!
I've reviewed so many toys based on Skeletor/ Keldor that I've given him his own review archive. Check out Snake Mountain for a plethora of Skeletor reviews!
For more of Night Stalker check out my review of the MOTUC Night Stalker.
For more POP! Rides reviews check out the following:
For more POP! Rides reviews check out the following:
He-Man on Battle Cat #84
Skeletor on Panthor #98
Skeletor on Panthor #98 (Flocked)