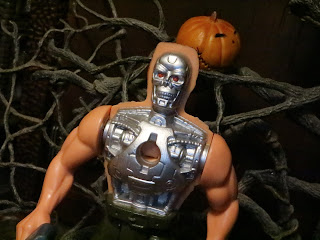 If you ask people who one of the most well known skeletons in film history is you're probably going to hear about the Terminator's endoskeleton. While it's not traditional bone like most of the skeletons we've looked at this month it definitely is kind of creepy with a creepy mixture of a human skeleton and a murderous robot. What a perfect time to check out one of Kenner's vintage Terminator figures, right? Last year I reviewed the Metal Mash Terminator endoskeleton so this year I decided to reveal one of the T-800 figures who reveals the endoskeleton inside. It's time for a look at Battle Damage Terminator! This version of the T-800 was part of the first series of figures from 1991 and I remember getting him along with a couple other figures for receiving an excellent report card in 2nd grade. He's not my favorite figure from the line but I always liked his shotgun and the fact that he truly looked like a regular human before you popped off his fleshy exterior. This isn't my original childhood figure but one I picked up a year or two ago to work towards completing my collection. Let's check this guy out after the break... 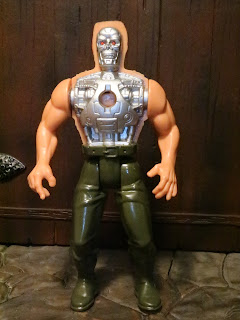 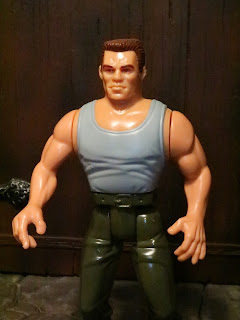 * As I mentioned previously I really liked this T-800 as a kid because he looked like a legit person. It's a very simple, basic looking version of the Terminator with green pants and boots and a bluish-gray tank top but the figure allows you to pretend the T-800 is just trying to blend in. He looks a regular tough guy you'd see on the street (though with massive hands). 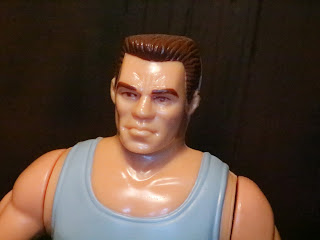 * The headsculpt isn't bad and for a toy made in 1991 with a head that's part of the action feature I think you can see the Arnold Schwarzenegger likeness. He's also sporting the flat top. I remember wanting a flat top around this time as a kid but when the barber said they'd have to use a lot of gel I opted against it. As a kid I was freaked out by the thought of gel and stuff in my hair. 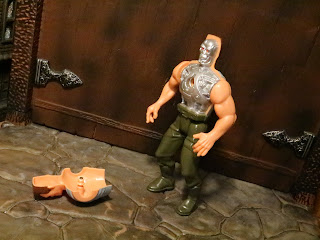 * The action feature on the figure is kind of cool: Pull down the T-800's right arm and the front of his torso pops off to reveal the endoskeleton within. Presumably this is to show off battle damage and while it's not bloody or even jagged looking it's still kind of neat. 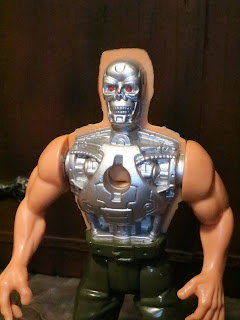 * The endoskeleton inside has a pretty cool sculpt. It's odd that it looks like it's just stuck inside a flesh mold but it's still a pretty decent likeness with lots of detail. I love those red eyes and the detailed teeth! 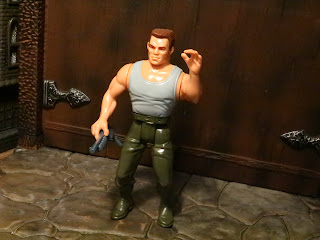 * Battle Damage Terminator doesn't have a lot of articulation, just swivel hips and swivel shoulder, but it's not bad and he's still playable. Honestly, as a kid I thought it was just fine. He's pretty durable, too. 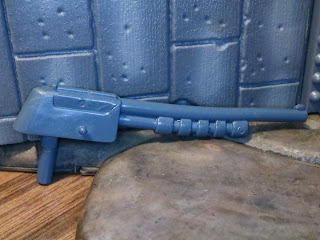 * While the various Terminator figures came with lots of missiles few of them came with any "realistic" weaponry like the type used in the film. This guy came with a fairly cool shotgun, though. The handle is a bit lame (mine broke off as a kid) but the rest of the weapon looks pretty solid. Plus, it's nice the weapon was molded in dark blue/ gray rather than neon pink or something. This was the early 1990s after all. 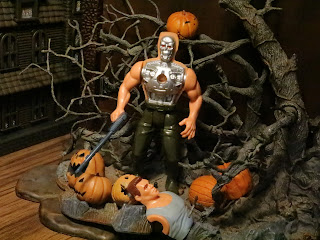 Battle Damage Terminator isn't my favorite series 1 figure (that's Power Arm Terminator) but he is a pretty cool figure from the line and one of the few that can truly be in disguise. He's got a fun action feature, a decent likeness to Arnie, and a cool weapon. Toys were simpler in the early 1990s but Kenner did put a lot of play value into most of their releases. Honestly, it's fun just to sit there and pop the flesh off of this guy. I remember taking Play-doh and trying to mold a more gruesome face over the endoskeleton to give him some battle damage. He's a Great figure even though he's now 30 years old.
If you're a fan of the T-800 I've also reviewed the ReAction Terminator from the Tech-Noir nightclub, Kenner's Metal-Mash Terminator from Terminator 2: Future War, and the Loot Crate 1/2 Scale Endo Skull from Terminator Genisys.
For more Terminator 2 figures from Kenner check out the following:
Terminator 2 by Kenner (1992)
Exploding T-1000
Terminator 2: Future War by Kenner (1993)
Metal Mash Terminator
Posted by Barbecue17 at 10/24/2021