Action Figure Review: She-Ra from She-Ra and the Princessess of Power by Mattel 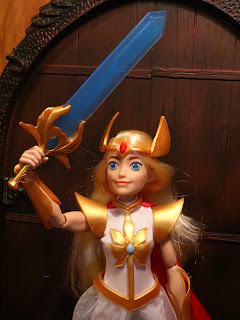 At the end of last week I reviewed the deluxe Battle Armor She-Ra and Swift Wind set from Mattel's She-Ra and the Princesses of Power line and today I'm reviewing the standard She-Ra figure. I've actually had these figures for a few weeks but I had to wait until after my daughter's birthday to pull them out. She got a set for her birthday (along with the sword and shield set), and guess what? I have a set of my own! Yeah, these totally are not my favorite Masters of the Universe figures of all time but, really, I'm just excited to see something Masters of the Universe related at mainstream retail in its own toyline. Like with the vintage She-Ra toyline, these dolls feel like a blend of the Netflix cartoon designs with a more traditional, doll influence. Like those vintage toys, they also utilize a mixture of plastic armored bits and fabric clothing to create a toy that's a mixture between an action figure and a fashion doll. I'm curious how fans overall will feel about these: Fans of the show may not like that the dolls have a very different visual style from the animation of the series, though folks who don't like the animation style may be able to appreciate some of the redesigns as they are rendered differently here. Let's take a look at She-Ra, who will always be the Princess of Power, after the break... 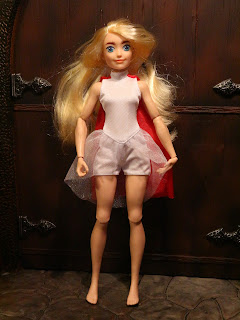 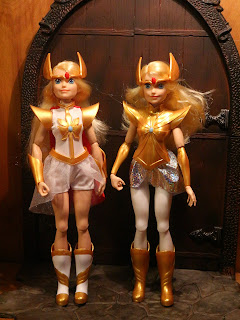 * On the left is the standard She-Ra figure while the Battle Armor variant is on the right. I honestly didn't realize it at first but both these dolls utilize the same body, boots, headsculpt, and tiara. The real differences are on the color of the bodies and the costumes. Their tiaras and swords are the same. They really do look quite different, though, and the various bits and pieces would be, I presume, interchangeable. 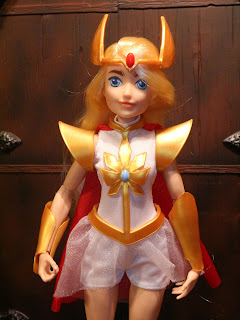 * I really like the look of the costume. As I mentioned in the intro, Mattel has absolutely take the designs from the new Netflix show and softened them up a bit, making them appear more doll-like. In this style, She-Ra is absolutely instantly recognizable thanks to her distinctive costume and color scheme. If you have a kid who is into any era of She-Ra (such as Filmation), they'd probably still be happy with this figure. The mixture of fabric and plastic parts looks good and gives the figure more depth. 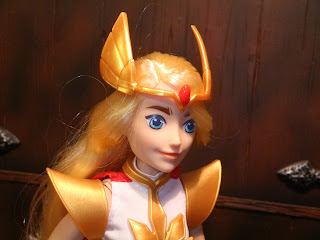 * I like the headsculpt on these. While the design is definitely based on the Netflix show, She-Ra's features have definitely been changed a bit. She-Ra has real rooted hair, too, and it looks pretty nice. My daughter has complimented it, stating that it is very easy to brush. Again, some of the things that appeal to her about these differ from what I like about them. That's OK, though, as they're totally made for her. Unlike nearly any other MOTU product made since....who knows when, I'm not the target demographic! 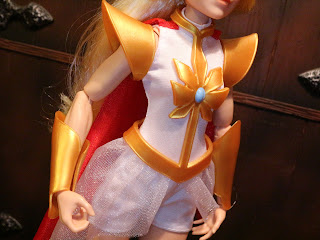 * She-Ra's gauntlets and the details on her armor (the gold shoulder pads, belt, chest piece) are removable plastic pieces. The chest piece, belt, and shoulders pads are one single piece, by the way. If you wanted to, you could mix and match the armor between this figure and Battle Armor to come up with your favorite look. My daughter will probably get more of a kick out of this than I will. It's nice to see some play features like that on the figures. 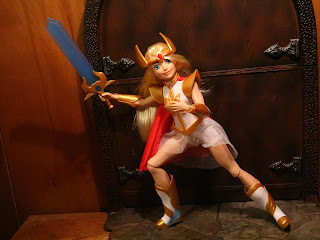 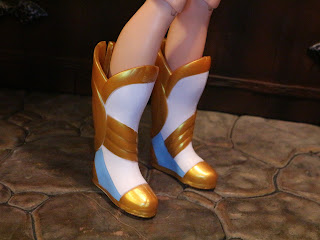 * Unlike Battle Armor She-Ra's boots, the standard She-Ra's boots are fully painted. They look great and give her a bit of weight, making it easier for her to stand upright in place. 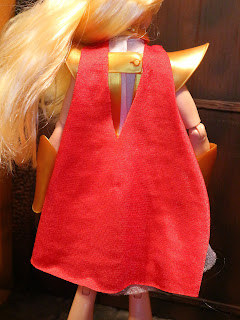 * This She-Ra has her cape! I love the cape! It's simple but it looks nice and it has a slot where one could, presumably, place the Sword of Protection. 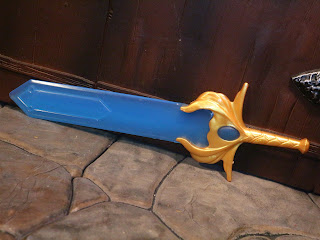 * I really like the Sword of Protection here. It's bigger and bulkier than the one in the show but it still looks quite nice. The blade is translucent and has a great design reminiscent of the design aesthetic of the First Ones tech from the show while the hilt is reminiscent of She-Ra's tiara. It's a cool, sturdy piece that just seems very fun. 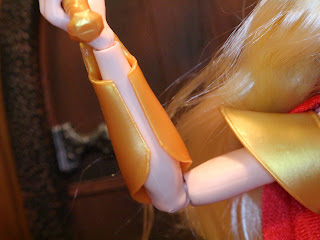 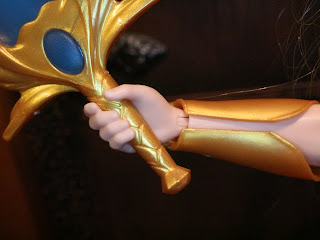 * She-Ra's wrist pegs tend to swivel down when she is holding the Sword of Protection, meaning that sometimes attempts to pose She-Ra holding her blade aloft fail. I wish her wrists were a bit tighter. 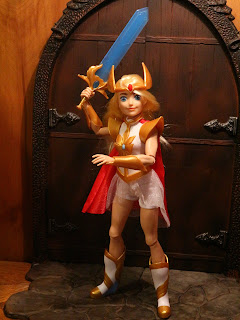 If you're only planning to pick up one version of She-Ra, this is definitely the one to grab. While she doesn't come with Swift Wind, this is a fantastic doll and toy. Currently these are only available at Target, so that's where you'll need to check for these (Mattel did a similar thing with the DC Super Hero Girls line). Whether you're a hardcore She-Raver, a Masters of the Universe collector who loves it all, a fan of the new show who is just getting into the property, or a parent buying a toy for your She-Ra loving child, it's tough to go wrong with this figure. She's fun to play with, has a cool costume, and the Sword of Protection is just aces. She-Ra is a Great figure and should be an easy find. Target is apparently getting entire cases of She-Ra, while the other dolls in the line come in at only 1 per case. I'm not sure how long Mattel plans to support this line but it seems like they have high hopes for the MOTU license, so we'll have to see. I really want them to at least get to Hordak, Entrapta, Mermista, and Sea Hawk.


If you're a She-Raver who digs She-Ra/ Princess Adora then check out the figures I've reviewed: The Masters of the Universe Classics Galactic Protector She-Ra, the Club Grayskull She-Ra, the She-Ra from the Super7 Battle for Etheria 2-Pack, and Mattel's She-Ra and the Princesses of Power Battle Armor She-Ra and Swift Wind.


For more figures from Mattel's She-Ra and the Princesses of Power check out the following:
Battle Armor She-Ra and Swift Wind
Posted by Barbecue17 at 8/28/2019