Action Figure Review: Catra from She-Ra and the Princesses of Power by Mattel 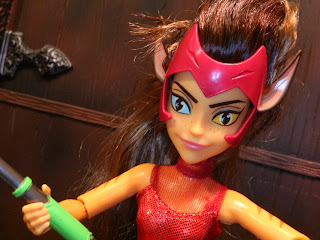 Catra is one of the characters from She-Ra and the Princesses of Power who differs the most from earlier depictions of the character, but you know what? It works! Catra is easily one of my favorite characters in the new cartoon, so it's only fitting that she's also one of my favorite figures in this new line. It turns out that Catra seems to be the hardest of the dolls to find as well. Considering she's She-Ra's primary antagonist in this series, packing her just one to a case seems like a bit of a misstep (She-Ra comes by herself 4 to a case while Catra, Bow, Glimmer, and Adora all come packed 1 to a case). Still, that doesn't change the fact that she's a pretty cool toy and a very unique interpretation of the character. She honestly reminds me of a character design from the 2011 ThunderCats. It really works for the character, though, and makes her quite unique. She's a great, conflicted villain. Let's check her out after the break... 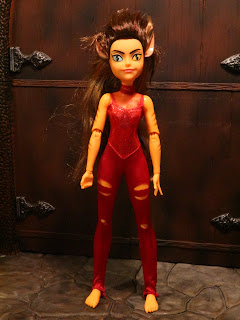 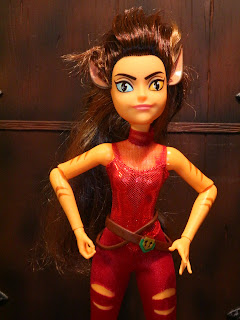 
* Catra is a very colorful, very cool looking figure. Mattel definitely took a little bit of creative license with the line, so what you're getting is a cross between the character design from the series with Mattel's current doll aesthetic, similar to a line like DC Super Hero Girls. She has orange skin, a great "mane" of brown hair, and a red one-piece outfit. The outfit is removable, so folks wanting to find a suit to deck Catra out for the Princess Prom can do so). Catra is a lot shorter than She-Ra, and she's also a bit slimmer and sleeker, too. 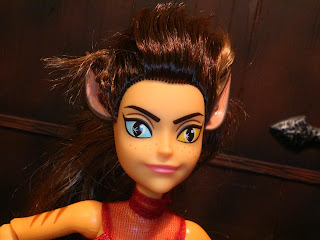 * Catra's headsculpt is pretty nice and, of course, her heterochromia is on full display. I love the paintwork on her eyes! Her hair is wild, just like on the show, although the back is much longer. 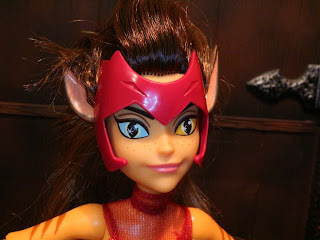 * Catra comes with her classic red mask, too. It's a removable piece, so you can display her with it on or off. It stays on pretty well and makes for a cool accessory. 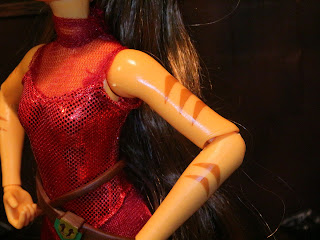 * While we can presume that Catra is furry, the show doesn't really make Catra's body look visibly furry. She does, however, have stripes on her arms just like in the show. This looks pretty good and definitely makes her look feline. 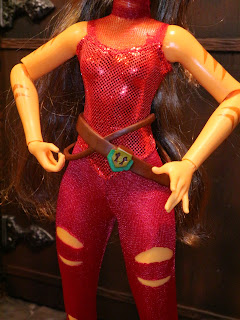 * Catra's outfit is quite nice. She has the rips on her hips, a removable belt, and multiple different types of fabric. The outfit is one-piece but features different fabrics to give her a much more detailed costume. It's definitely a bit more "fashion doll" than Horde outfit, unlike the show's costume, but it works and probably makes the outfit more appealing for kids. My daughter really seems to like it (she got the set of these for her birthday last month), so that is proof that Mattel is appealing to their target demographic. 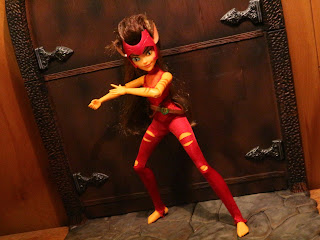 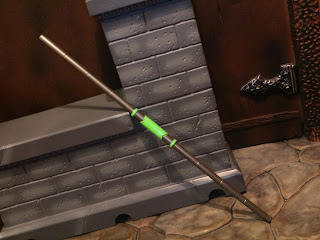 * Catra comes with her staff. It's a weapon she's used in the show and it fits in the figure's right hand easily. The paint applications make it stand out a little bit more as well; bright green is just very eye-catching! 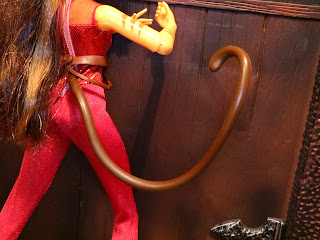 * Catra has a tail that plugs into the figure's lower back. It actually tends to fall out very easily, though. Anytime I try to move it it just pops out. 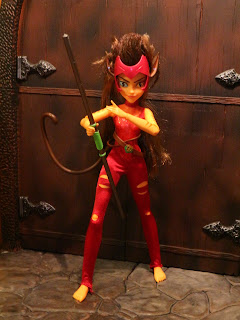 I really like Catra and, thus far, she's my favorite figure in the line. Easily a Great and a 1/2 toy. Her design really translates well into this toyline, her costume is captured well, and she has two cool accessories. The tail is a little frustrating, sure, but overall this is a very fun figure. So far we haven't seen anything from Mattel beyond this series but hopefully we'll hear about more soon. These seem to be selling quite well at Target, which they're currently exclusive to. Considering they're only around $15 dollars each these are some pretty nice toys. I do hope Mattel continues to expand the line, though, particularly offering up more characters (I really, really want a Entrapta and a Mermista!). The Masters of the Universe lines always seem to do the best when there's a strong roster of heroes and villains for kids to collect and fall in love with. The cartoon has been quite good at introducing multiple characters so hopefully the toyline will follow suit.

Are you a Catra person? Then check out my review of Catra from Super7's Battle for Etheria 2-Pack.

For more reviews from Mattel's She-Ra and the Princesses of Power, check out the following:
Battle Armor She-Ra and Swift Wind
Bow
She-Ra