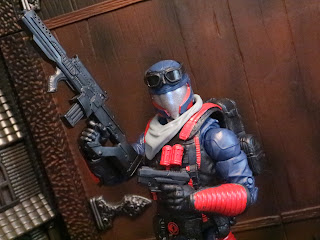 Yes, friends and neighbors, I do have a Cobra Viper from the G.I. Joe Classified Series. This guy is a Target exclusive and from all accounts he's an absolute pain to find. The Target exclusive Cobra Island subset has been one of the worst exclusive sets to finds that I can recall in years which is a shame for a line that's been so well done and so popular. The Cobra Viper has always been my favorite Cobra army builder, followed by the Alley Viper and the Night Viper. While the original file cards portrayed the Vipers as the grunts and the bottom of the Cobra food chain, visually they never seemed that way to me. They always seemed like Cobra special forces (the Crimson Guard seemed to me to be more ceremonial and designed for intelligence and espionage). The Viper's weapon was highly sophisticated and they seemed to be packing a decent amount of armor and gear for a trooper designated as simple cannon fodder. This guy further makes me think of the Vipers as all around Cobra special forces as he seems ready to spend some serious time behind enemy lines. Let's take a look at the G.I. Joe Classified Series take on the Cobra Viper after the break... 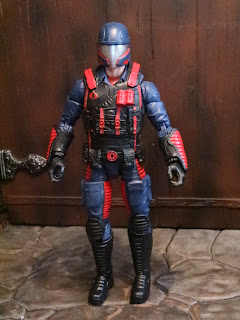 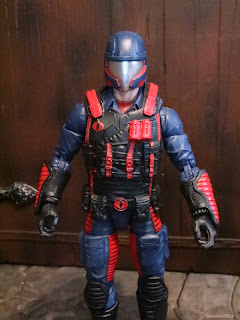 The Positives:
* The Cobra Viper really does a fine job of capturing the look and feel of the vintage toy while also subtly updating elements of his armor and gear. The blue, red, and black color scheme is excellent and overall the paint applications look fantastic. Hasbro is doing an excellent job of capturing the texture details on the different pieces of the outfits in this line and the Viper is no exception. 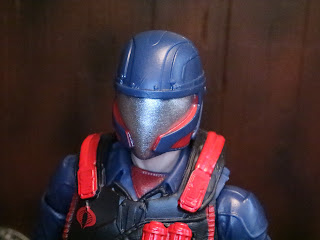 * The Viper's trademark helmet is very classic looking. It's actually somewhat similar to Cobra Commanders with the shaped helmet and the silver face shield but it clearly looks more designed for combat than Cobra Commanders'. 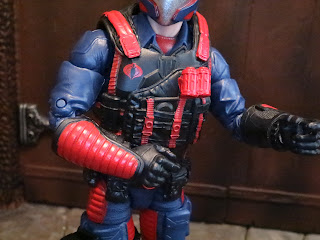 * The Viper's flak jacket and forearm pads are actually separate pieces. The flak jacket and left forearm pad aren't removable although the right pad is. The sculpt is excellent with lots of straps snaps, and details. The Cobra emblem on the right breast is clean and the grenades on the left side are a cool touch, carried over from the vintage toy. 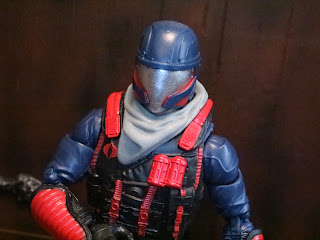 * Hasbro included a shoulder pad with the Cobra Island Cobra Trooper to help differentiate the figure a bit from the standard release that was then upcoming and I highly speculate this bandanna will also be exclusive to this version of the Viper. It's actually pretty cool. It's a simple piece that snaps around the figures neck but it gives him a bit of a special ops vibe in my eyes. You know, this guy's out in the field hanging around with just his squad for days at a time, rather than always being dressed to the nines and hanging out at a Cobra base. 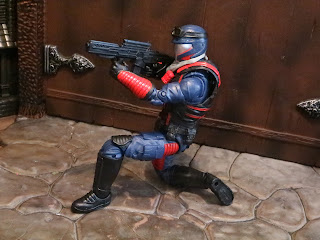 * Like every other figure in this series the Cobra Viper's articulation is flawless. these guys are just so well made and have fabulous articulation. The range of motion in the joints is excellent and he just looks fantastic holding his rifle in two-handed poses. 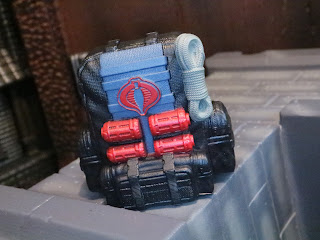 * Let's start checking out the Viper's gear. First up is a backpack with quite a few paint applications. Besides whatever the Viper has stored in her there are also four grenades easily accessible on the back and a length of rappelling cord. 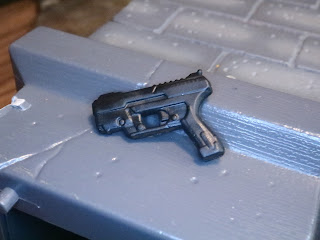 * The Viper comes with the same pistol as Duke but it's simply molded in black with no paint highlights. It's a cool sculpt, though, and I'm OK with it showing up again. 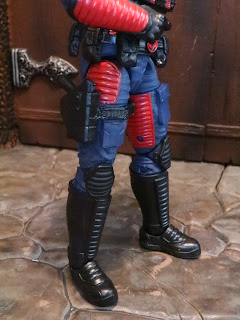 * Not only is the Viper sporting lots of armor and padding on his legs but he also has a removable holster for carrying his sidearm around. 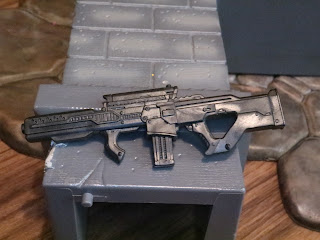 * The Viper's rifle is one of the best in the series yet. Looking at the design, especially aspects like the magazine and the barrel, it really looks more like an actual firearm (though it's still a bit futuristic looking). I love this piece and the Viper hold sit perfectly. I wish is had the grenade launcher on the bottom which the vintage Viper rifle came with, though. 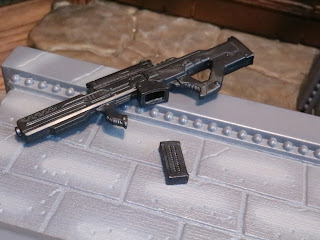 * The rifle also features a removable magazine. That's just cool in my book. It fits in very securely and gives you some cool display options when posing the Viper. 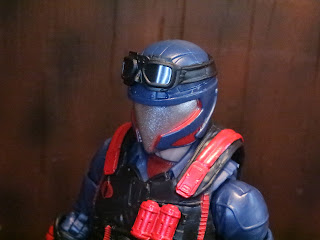 The Negatives:
* The Viper has always sported both a face shield and goggles and here the goggles are a removable piece. What's weird, though, is that they don't fit on the helmet well. You can see that they're just a smidge too small. An elastic strap, like on Hasbro's Hoth Rebel Soldier from Star Wars: The Black Series, would have been ideal. As it is they fall off too easily and just aren't very useful. 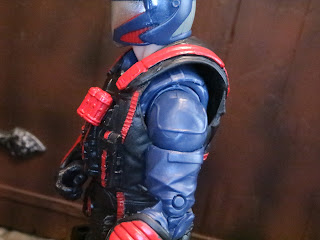 * This could just be a QC issue on mine but what's with the edge of the Viper's vest sticking up like this? It's really awkward looking, isn't it? 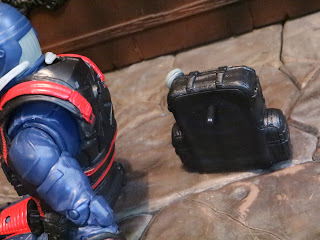 * The backpack is awesome but it tends to fall off a bit too easily. The pegs either need to be a bit tighter or a bit longer. 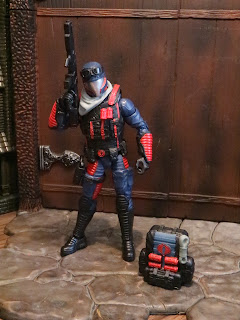 The Viper is a really cool figure with some weird little flaws. I love the design, the accessories, and the overall feel of the figure but little things like the goggles not quite fitting and the ill-fitting vest definitely kill a but of my enthusiasm. Not much, as I still pick this guy up all the time, but they're noticeable. I'm sure we're going to see this sculpt again as the Cobra Vipers are premiere army builders and Hasbro will definitely want to capitalize on the sculpt. Hopefully they fix the goggles, though.
This is the first Cobra Viper I've reviewed on the site. For more G.I. Joe Classified Series figures check out the following:
Arctic Mission Storm Shadow
Baroness with Cobra C.O.I.L.
Cobra Commander
Cobra Commander (Regal Variant)
Cobra Trooper (Special Missions: Cobra Island)
Destro
Duke
Firefly
Gung Ho
Profit Director Destro
Red Ninja
Roadblock
Roadblock (Special Missions: Cobra Island)
Scarlett
Snake Eyes
Snake Eyes Deluxe
Wayne "Beach Head" Sneeden