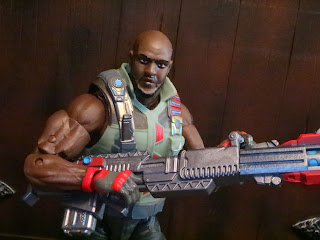 Roadblock v2 from 1986 was one of the earliest G.I. Joe figures I owned. I remember my parents giving him to me, along with the Road Toad, on my 4th birthday in 1987. General Hawk v2 was my first G.I. Joe figure (and maybe my first action figure), Sci-Fi was my second, and I'm pretty sure that Roadblock was my third. I grew having both Roadblock v2 and Tiger Force Roadblock, so he's always been one of my favorites. Roadblock is definitely a pillar of G.I. Joe appearing as a mainstay in both the comics and the cartoon prominently until the early 2000s when Hasbro began using Heavy Duty (Roadblock's cousin). Marvin F. Hinton has made his way back into the spotlight, though, getting a huge boost by being played by Dwayne "The Rock" Johnson in 2013's G.I. Joe: Retaliation. Whether he's a rhyming chef, a hardcore heavy machine gunner, or the Rock fighting ninjas, Roadblock is always a force to be reckoned with. I actually have a bust of Roadblock in my study and, like the Roadblock poster from Shortpacked! it keeps me in line. Let's get on with this review of Roadblock from the G.I. Joe Classified Series after the break... 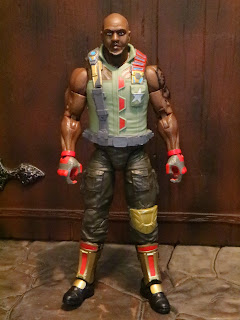 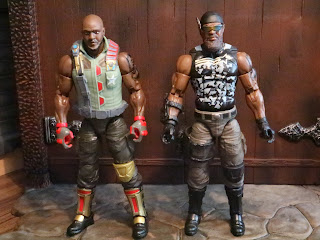 * Roadblock already has a variant out in the line and I managed to track it down, so here's a comparison shot: On the left is the standard series 1 Roadblock while the Target exclusive Cobra Island Roadblock is on the right. The two figures actually have different headsculpts while the series 1 figure has a vest instead of a shirt. 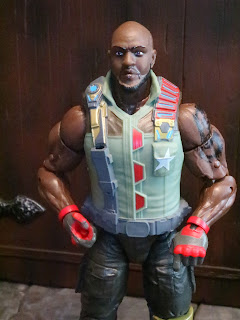 
* While Roadblock has the trademark gold elements of the new Classified Series, he definitely seems to take inspiration from 1986's Roadblock v2, particularly due to his hairstlye and the green vest. This is a nice homage to the vintage figure with quite a few modern influences to set it apart as more than just an update of the vintage toy. The vest is actually a separate rubber piece (not removable) that fits over a standard articulated torso. It looks pretty slick and the fact that it's an overlay gives the figure a more padded, "three-dimensional" feel. I like the red gloves as they tie in with the color scheme from Roadblock's vest, too. 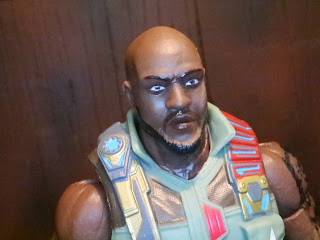 * I imagine that when many of the Cobra troops go to bed at night they have nightmares about Roadblock. Looking at this figure, I can believe it. He looks like a pretty tough character. The headsculpt and draws inspiration from the vintage figure while also improving the detail. He utilizes the face printing technology Hasbro has been using for a few years now, which just makes every figure look so much better. 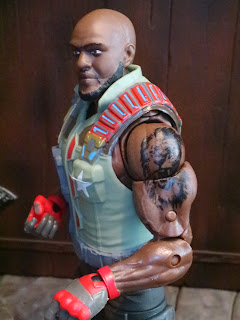 * Is this the first Roadblock with a tattoo? I can't recall offhand any of the other figures having one, but this guy does. It's pretty cool, too. He's sporting a lion on his left bicep. The printing is pretty nice although it is broken by the bicep swivel. That's not a huge issue, though, and it's just kind of the nature of the beast I guess. I really like the detail on his shoulder pad on the left shoulder. It's another nice homage to the vintage v2 figure. 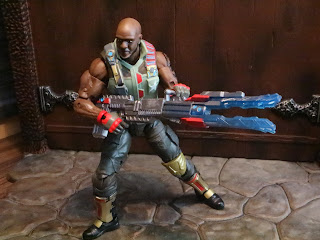 * Roadblock has the same articulation scheme as the rest of the figures in the line and it works great. He's very durable and moves very nicely. The articulation system really is nicely on these, allowing Roadblock to even hold his massive weapon in a few different positions. While his vest does hinder his torso articulation a bit, there's still room for some movement. 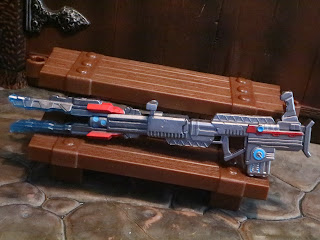 * Roadblocks' massive weapon is pretty cool looking, though I certainly emphasize with those who wanted something a bit more traditional. Rather than a standard machine gun it seems that Roadblock is packing some sort of a portable rail gun. It's definitely fitting for Hasbro approach to the weapons in this line. It's actually something that feels like it would have fit in with Sigma 6 as well. The detail is pretty solid on the weapon and he can hold it by the rear handle or by the trigger, which I imagine could be used for different firing modes. 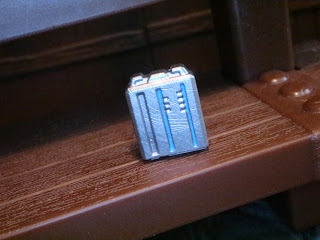 * Roadblock's weapon does have a removable piece. It looks like a magazine, but it might be a battery pack of sorts, too. It's a cool feature though it would have been really cool if the packaging included some information on Roadblock's specialty and the specifics of his gear. 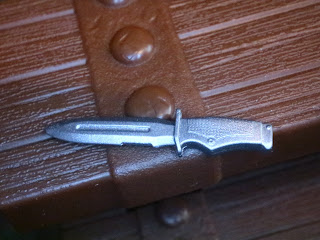 * Roadblock also comes with a small knife. It's a simple piece, molded in silver plastic. The sculpt is nice, though. I like all of the unique accessories are getting and I really hope each figure continues to get their own unique weapons. That was a big thing that made the A Real American Hero line feel special. 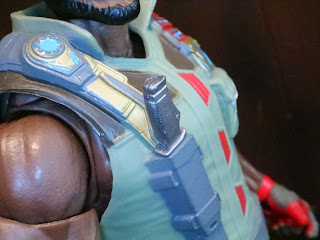 
* Roadblock has a working sheathe on his chest but it's really weird. It seems like the knife doesn't go in at a proper ankle and isn't held in place particularly well. It seems like it could accidentally cause the blade to bend. 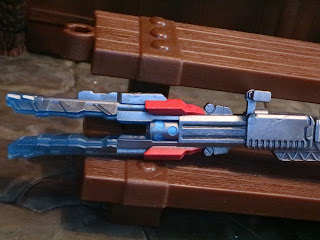 * Roadblock's gun is pretty cool overall but it's really weird that the tips are translucent. A removable "energy effect" would have been a better choice. It also feels like the tips of the gun should have been hinged so they could swing out into position for different firing modes. 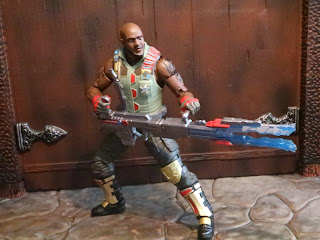 The G.I. Joe Classified Series seems like it's been a big win for Hasbro so far and it's pretty exciting to have this must interest around the G.I. Joe brand. Roadblock is another really solid figure and while there are lots of things I would have liked to have seen from him (removable vest with a tank top underneath, a more interesting primary weapon, a pistol) overall he's a nice update for the character with a more modern take. He's a Great figure who fills a key roll in the core team we've received so far. He's packed 1 per case in the first series, like everyone except Snake Eyes.


This is the first figure of Roadblock I've reviewed on the site. For more reviews from the G.I. Joe Classified Series check out the following:
Duke
Scarlett
Posted by Barbecue17 at 8/10/2020