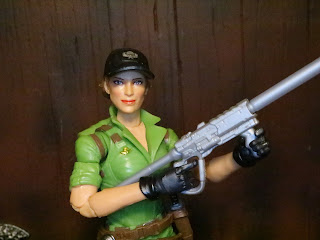 Some of Hasbro's "Retro Collection" offerings for the G.I. Joe Classified series simply feel like less impressive versions of figures we already have. I actually ordered Destro but returned him when he arrived as he's the same as the original figure but with fewer paint applications and weaker accessories. The Baroness also has fewer paint applications and is missing some of the cool details, although her portrait looks better and she comes with repacks of the Cobra Trooper's cool weapons. Gung-Ho, however, is almost a completely different figure from the original release and is a huge improvement. So, what about Lady Jaye? Lady Jaye may not be an improvement but she does feel different enough (improved faceprint, new paintjob, and two new accessories) that I decided to pick her up. I actually found her on an Ebay sale for well below retail price. I was actually a bit worried that I'd receive the standard Lady Jaye from last year since the image used in the sale was a stock photo but, lo and behold, my Retro Collection Lady Jaye arrived perfectly. Ready to check out a more classic version of Lady Jaye? Then join me after the break... 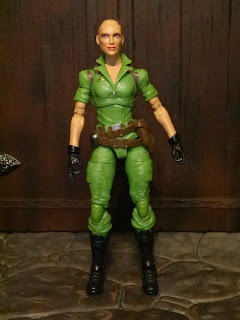 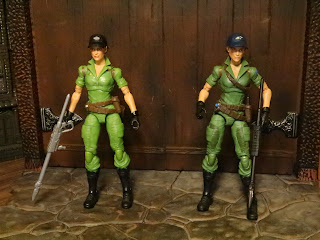 Comparison:
* The Retro Collection version of Lady Jaye is on the left while the first Classified Series Lady Jaye is on the right. While these are the same figures, the paint jobs are different as are the accessories included. Some are just different colors while others are completely unique. It's definitely more than a repaint. 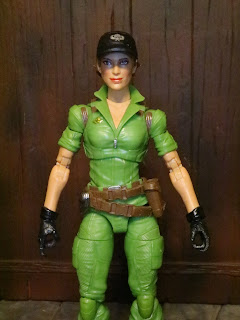 * Lady Jaye has almost always worn a green jumpsuit with a flared collar and this version still adheres to that tradition, though it's brighter than the previous release. It's definitely more of a lime green than the subdued green of the first release. The detail is still incredible on the costume with plenty of folds and wrinkles on the suit along with some ribbing, textured material around her thighs, and lots of folds and pockets. Those padded areas aren't given a different paint color this time aroud, though; they're bright green, just like the rest of the suit. All of the paint detail is neat and clean still, though thee is less of it. Lady Jaye is still sporting the double belt (it's a separate piece but not removable) and sculpted shoulder straps but she doesn't have the chest strap like the previous figure included. 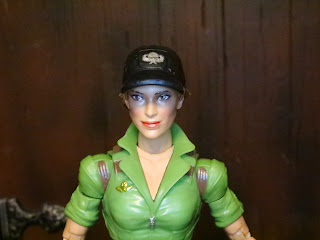 * I liked Lady Jaye's headsculpt on the previous figure and while this one is the same sculpt she's definitely wearing more makeup. She's a bit "prettier" here, which is just fine. Honestly, you could probably swap the heads if you wanted to. No reason she can't stick it to Cobra and look good at the same time right? Her hat is removable, like the standard release, though she doesn't have the extra hairpiece. She does have a black ballcap this time around with an airborne logo on it rather than the G.I. Joe stars and stripes logo. It can swap out with the previous figure, too. 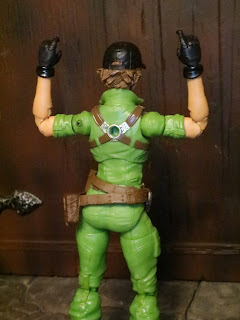 * Lady Jaye has a logo on her left shoulder as well as sculpted backpack straps on her back. It's also pretty cool to see all of the details on the back of her pistol belt. 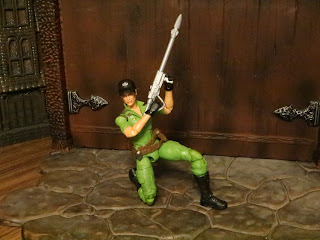 * The articulation on Lady Jaye is the same as on the previous version,  so there isn't much new to add: It's excellent and really allows for some great, expressive poses. Getting her to hold weapons with two hands is a breeze, too. She does have double jointed elbows which not all of the women in this line have. They work great and while they take a little effort to pose properly they really enhance the range of motion for the figure. 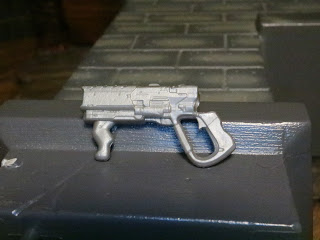 * Lady Jaye's primary weapon in the vintage line was a power javelin that seemed to be a sort of more powerful spear gun. Probably lethal and quiet though seemingly rather unpractical. Lady Jaye  come with a javelin launcher in the Classified Series, too, complete with removable javelins. It really looks like some of the high end spear guns available for purchase, though this is clearly a more sophisticated piece of equipment. The sculpt is quite detailed and I like the forward grip on the weapon. This time around the power javelin launcher is silver, just like the vintage toy. 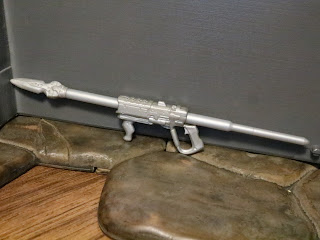 * One javelin is included and it's silver, too. It's a solid shaft which can be used on it's own, similar to how Lady Jaye used javelins in the cartoon, but it fits in the launcher perfectly. 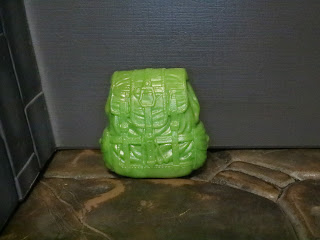 * A new accessory is a green backpack similar to the vintage accessory. There aren't any paint applications but it has a lot of detail in the sculpt and it stays on the figure well. 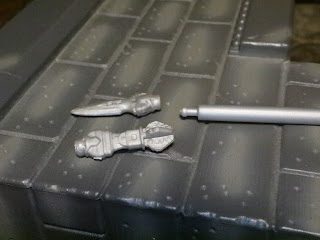 * The javelin comes with two tips: A standard bladed tip and a special tip. Perhaps it's a grenade or an EMP or something? Possibly even a taser/ stun tip? Again, it seems kind of antiquated but it's fun to imagine the high tech innovations that have been placed into the gear in this line. 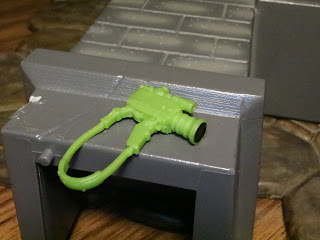 * The second "new accessory" for this figure is the surveillance camera. It's based off of the accessory included with the vintage Lady Jaye which, by now, is surely very antiquated. I don't know. Pretend it has way more features in it than you could have even dreamed of in 1985. The black lens is a nice touch, though. 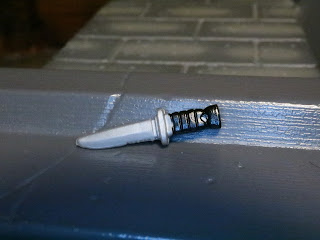 *  She also the knife from the previous figure. It's simple and plain, but this time around the blade does get a silver paint application. Nifty! 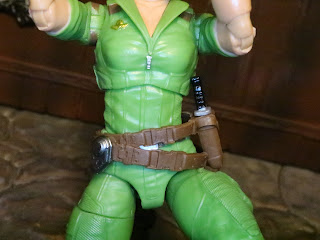 * Lady Jaye's belt has a sheathe for the knife and one of the cool little communicators, though the paint is different here. I love that most of the team has had these on them though we're starting to see them more sparingly. 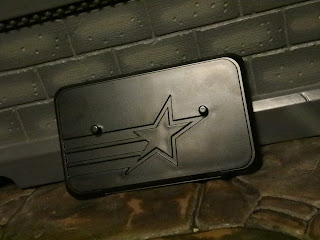 * The retro carded G.I. Joe figures all come with a display stand with the G. I. Joe star and stripes logo. they work well and I'd love it if Hasbro would sell these in packs of 10 or 20 on Hasbro pulse. They're simple and effective and every figure should have one moving forward. 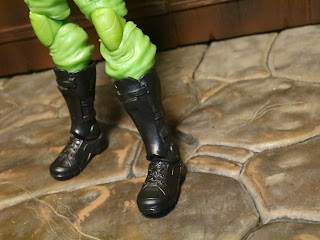 The Negatives:
* I complained about it last time and I'll complain about it again: Where is Lady Jaye's ankle holster? That's a detail that was on the vintage figure and on the 25th Anniversary figure and I wish Hasbro had kept it. It's a perfect item for a covert operative and would have given her at least one standard firearm. I feel like it really needed to be here, especially on this "Retro" release. 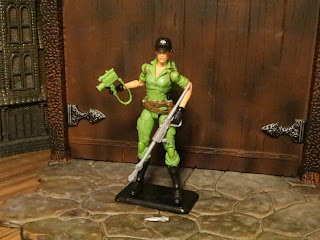 While she's not drastically different from the standard Classified Series figure, this Retro version of Lady Jaye does manage to hold her own and makes for a great figure. While she's a few bucks more, she definitely has some cool new accessories and a different, retro inspired paint job to help keep things interesting. I do like her, probably about the same as the original figure. This Lady Jaye gets a Great and a 1/2 from me as well. You could probably pick your favorite of the two figures or mix and match accessories and hats to create your ideal version. Whatever floats your boat.


If you're looking for more of Lady Jaye I've reviewed the standard Classified Series Lady Jaye as well as the 25th Anniversary Lady Jaye years ago at MWCToys.com.