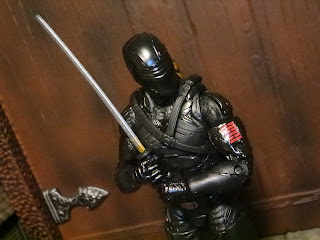 I've got two more G.I. Joe Classified Series figures to wrap up for 2022 and the first is Snake Eyes from the Snake Eyes: G.I. Joe Origins movie released in 2021. I still haven't seen the movie yet as it just hasn't appealed to me that much. I largely ignored the Classified Series tie-in figures except for Baroness  but there was a sale in December at GameStop and I ended up finding Snake Eyes for a pretty good price. Shop around and you'll surely find this guy for as low as $10 or so. Since he's completely masked I figured I could still use him with the rest of the Classified Series figures. I do like the sleek costume as it gives a slightly different look to the character. While it seems that the film and product was a flop, Hasbro did put out some nice figures that mostly blend in well with the main Classified Series line. Let's check out Snake Eyes after the break and see if he's worth rolling the dice on.... 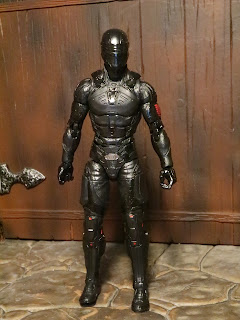 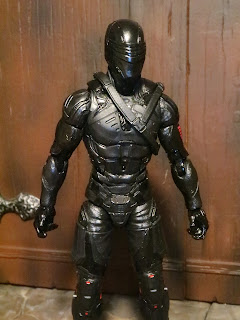 The Positives:
* Looking for Snake Eyes? Well, here he is. Snake Eyes is still wearing black from head to toe like most other versions of the guy but with just a few little flecks of red here and there to break things up. His outfit is very detailed with an armored look to it. It reminds me of the Reactive Impact Armor suits from the Rise of Cobra movie mixed with that films version of Snake Eyes. There is a harness across his chest that's a separate removable piece as well. 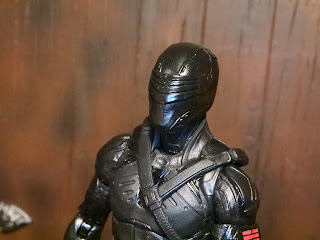 * The helmet is a pretty classic Snake Eyes helmet with the v2 visor rather than goggles. Nothing too special but it gets the job done. 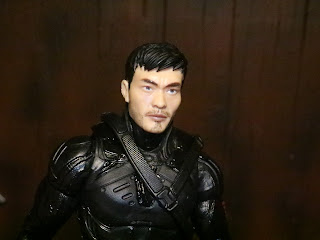 * The best thing about this figure might be the unmasked Henry Golding head. It's a fantastic sculpt that really makes great use of the face printing technology to craft a very realistic likeness. I can't see myself really displaying Snake Eyes like this on my shelf (maybe as a another character?) but Hasbro did a darn fine job here. 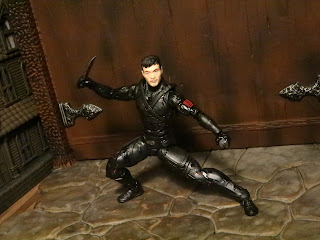 * The articulation is pretty much just like the standard Classified figures meaning it's solid, durable, and really fun to mess around with. You can get some excellent martial arts poses out of Snake Eyes to show off all of his ninja training. 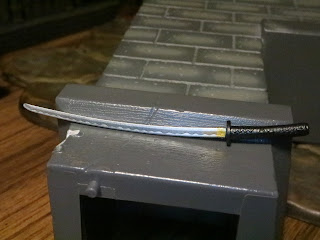 * To me the biggest problem with the movie figures is that they just don't come with much cool stuff. Baroness was pretty good (her kukris and modular MP5K were awesome) but everyone else is a little bare bones. Snake Eyes might be the second best as accessories. His primary weapon is a katana. It's nicely painted and looks pretty cool. It's a very simple, classic weapon that works well with the figure. 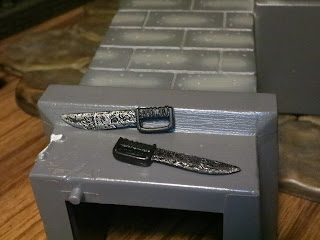 * Next up are a pair of butterfly knives. They're cool sculpts (maybe a tad small, though) with an interesting paintjob. They look really worn and aged. They kind of remind me of the blades that Snake Eyes v3 had across his chest (that was my Snake Eyes as a kid) so these are probably what got me to finally pull the trigger on this Snake Eyes. 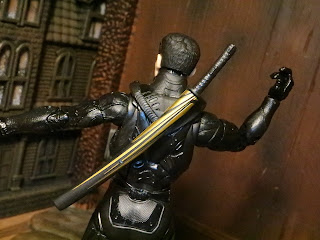 * Need a place to store Snake Eyes' katana? Then how about this gold and black sheathe? it fits into the hole on his bag quite firmly and looks great. 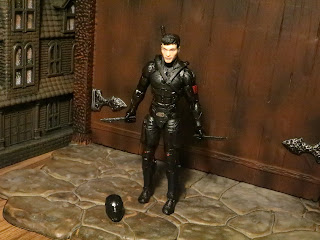 There's nothing really wrong with this figure at all. It's Snake Eyes, so you know it's going to be cool and fun, but I do wish he came with a few more goodies. It's tough to get terribly excited about him considering all of the other cool Snake Eyes figures in the Classified Series but Hasbro still did a nice job with this guy. The unmasked portrait is an excellent likeness to the actor for sure. I really wish he had a place to store those knives, though! This is a Great figure that seems to be dropping in price so if you're interested in him shop around and snag a deal. You're sure to find one.