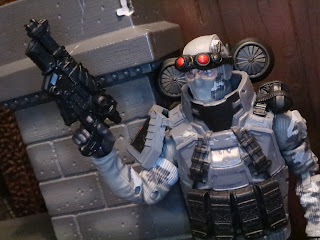 Ever since January 1st the hunt has been on for the newest set of the Cobra Island exclusive figures from Hasbro's G.I. Joe Classified Series. The Classified Series was absolutely the surprise action figure hit of 2020 and it looks to be going strong into 2021 despite the seemingly small number of releases. Oh, and the pain of finding these figures. Yes, pain. Whether Target under ordered, Hasbro undelivered, or both bare the blame, finding the Target exclusive G.I. Joe figures has been excruciating. Honestly, there isn't a Target too close to me and I just didn't feel like hunting for Firefly in the middle of a global pandemic so I went ahead and paid a bit more for him. Yeah, I hate it too, but when you have people lining up to buy these as soon as stores open and they're only getting a case or so, I'm sick of playing the game. Anyways, that being said let's move on with some positive stuff: Firefly is super cool. Hasbro's design team for the Classified Series has done a great job of mixing the classic A Real American Hero looks with some modern design aesthetics, giving the line a bit of a Metal Gear Solid feel which I love. For Firefly they've take his classic urban camo clad look and role as a saboteur and combined it with the armored look of an explosives expert. It's a cool way of not just doing the same thing as the vintage line while still make the character recognizable. Let's take a look at Firefly after the break... 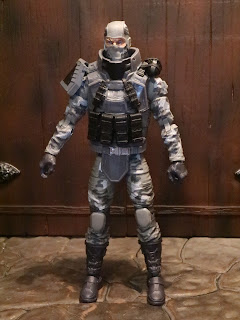 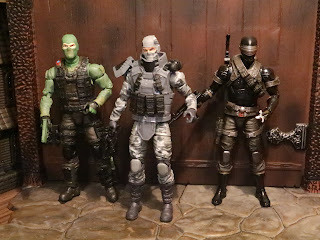 * Firefly (center) uses quite a few parts from previous figures. His torso, arms, and hands come from Beach Head (left) while his crotch and legs come from Snake Eyes (right). Most G.I. Joe lines have had utilized reused parts and unless you're looking for it it's doubtful you'd even notice it as Firefly still feels quite unique. 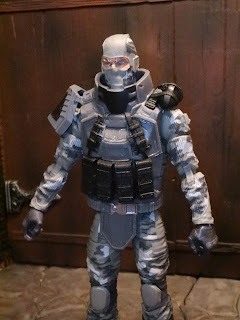 * Where to start? Firefly is one intimidating figure! He's decked out in urban camouflage and a heavily armored blast suit. The camo pattern is awesome here  and it looks incredible. The colors on this guy rock and the small textures on his clothes are incredible. 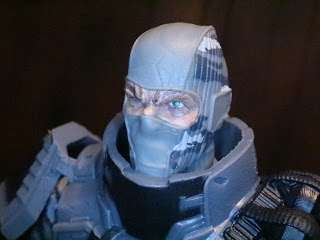 * The headsculpt really is the best part of this figure. Honestly, I'd pit Firefly's headsculpt against most other headsculpts out there are one of the best, even against stuff from Mezco and NECA. The sculpt is amazing and there's so much cool detail. Check out how one of his eyes is scarred and opened wider than the other. Or how is mask is askew on top. My guess? An explosion has damaged the top of his head and his hair doesn't grow right, leaving some patchy spots and scarring that keeps his balaclava from fitting on just right. 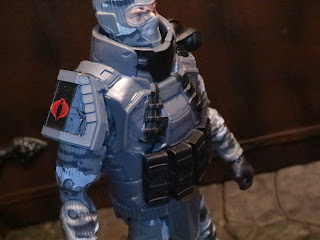 * The armored vest is a separate plastic overlay that apparently has two variants: A matte finish and a glossy one. Mine looks to be the glossy one in hand. Woo hoo! Yeah, it's a minor production variant. It doesn't change the fact that the armored vest is pretty cool with a Cobra logo on the right shoulder pad and lots of pouches for storing gear and extra magazines, along with a row of grenades across his left shoulder. 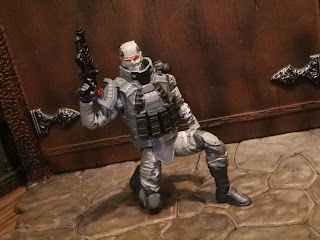 * There's not a lot new to say about the articulation:  It's all quite nice and incredibly useful in getting excellent poses out of the figure. There are plenty of joints and they all move quite well. Hasbro has been on a roll for quite a few year now, making some of the sturdiest and most well designed 6 inch scaled action figures on the market and thus far the Classified Series has been another hit. Construction wise, this might be the best line Hasbro is putting out right now. Even with the heavy EOD vest, most of Firefly's joints are unimpeded. 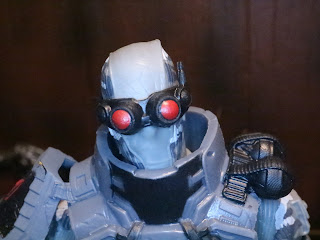 * Firefly looks really cool sporting these goggles. They fit over his head quite well and the round, red lenses are pretty awesome. A couple of the 25th Anniversary Firefly figures had red goggles and I loved that addition to the character's look. I speculate that in addition to offering him vision enhancements the goggles also can synch with his drone to provide Firefly a better view of what the drone is seeing. 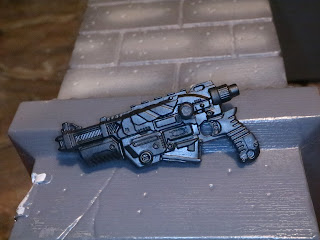 * Firefly's weapon looks to be a mixture of a standard projectile based rifle with a sci-fi bent. Honestly, it kind of looks like the Nerf Stryfe (part of the N-Strike Modulus series). It's a great sculpt and seems like a compact but lethal weapon that could give Firefly the edge he needs if caught and forced into a tight spot. 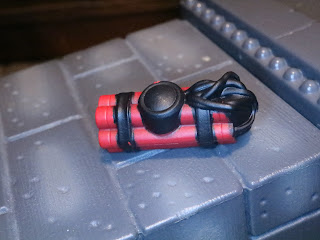 * Firefly also comes with an explosive device. looking at it, it seems to be a bundle of dynamite with a detonator on it. That seems a bit old school for Firefly, but maybe I'm wrong and this is something else more modern. Remember Powder Keg from C.O.P.S.? This kind of reminds me of his bundle of explosives. 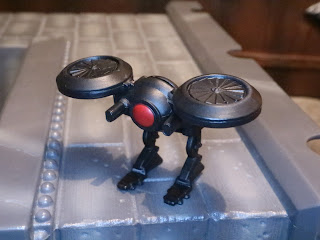 * To help him in his efforts to sabotage his target Firefly comes with a drone. It's very cool and while it's fairly simple, the red eye on the front matches the lenses of Firefly's goggles. The legs also swivel, allowing you to stand the drone up. It looks like it might have some sort of barrels to the sides of the eye, perhaps meaning Firefly can target enemies with projectiles of some sort. 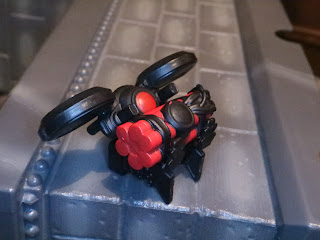 * The legs of the drone can actually close around the explosive device, too, making the drone capable of carrying it to it's destination. 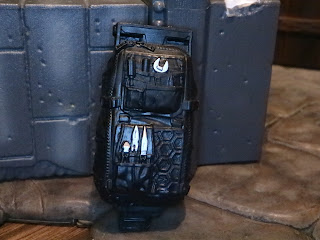 * Firefly is packing a large tactical backpack loaded with tools. There are all kinds of little pieces sticking out like wrenches, pliers, and blades. All the tools he needs for some sabotage! 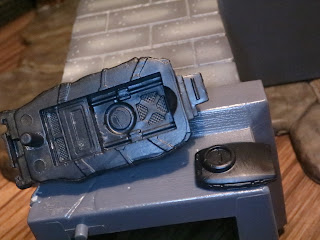 * Behind the backpack is a pop out device which I assume is a detonator device for his explosives or a control for the drone. At first I thought it was another explosive device but I'm not pretty convinced it's a tablet or remove of sorts. 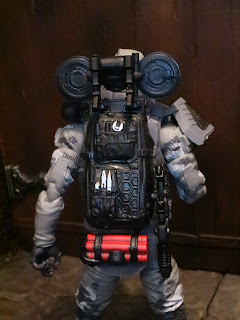 * I'm a huge fan of how the G.I. Joe Classified series figures can hold all of their accessories. The backpack houses the control device while the explosive fits on the bottom, the legs of the drone plug into the top, and the firearm plugs into a hole on the side of the backpack. 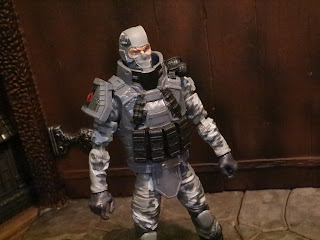 The Negatives:
* Let's talk about Firefly's vest for a minute. It's really cool and definitely a key part of the figures look and identity but wouldn't it have been cool if it had been removable? I know Firefly wouldn't have his webgear or anything (Hasbro will most assuredly release another Firefly down the road) but it would have been a welcome feature. 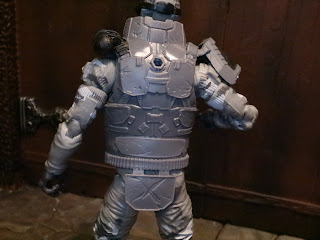 * While the front of Firefly's EOD vest has lots of paint applications the back is quite plain. Surely there should have been some paint applications here, right? This almost feels like one of those Bandai or Playmates releases where they only paint the front half of the figure. 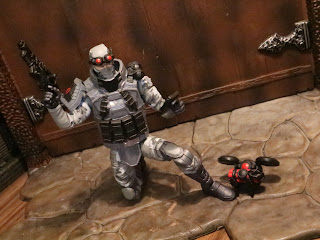 I am absolutely loving Firefly. I've probably picked him up and messed around with him more tan any other figure I've purchased so far this year. I just like almost everything about him. Yeah, I would have liked for him to have a pistol in a holster or something but overall he's excellent. It's a shame that a figure this cool is so darn hard to find! The G.I. Joe Classified Series could definitely have a long life and while it has hype now I'm not sure hype alone is going to carry it into the future. Hasbro has to work with their partners to make these figures more available. This is an Epic figure and he should be easier to find on shelves, luring passing kids and collectors into this line.
Interested in more Firefly? Then check out Firefly from G.I. Joe: Sigma 6.
For more reviews from the G.I. Joe Classified Series check out the following:
Arctic Mission Storm Shadow
Baroness with Cobra C.O.I.L.
Cobra Commander
Cobra Trooper (Special Missions: Cobra Island)
Destro
Duke
Gung Ho
Profit Director Destro
Red Ninja
Roadblock
Roadblock (Special Missions: Cobra Island)
Scarlett
Snake Eyes
Snake Eyes Deluxe
Wayne "Beach Head" Sneeden