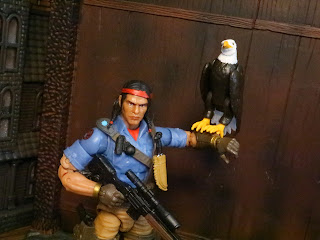 I'm having a tough time deciding if Spirit Iron-Knife or the Cobra Officer is my favorite figure from this series as they're both incredible figures. I never owned Spirit as a kid as he was part of the 1984 series, which was about two years or so before I got into G.I. Joe, so it's possible he just wasn't on shelves anymore by the time I was picking up figures. I was always familiar with him from the comics and cards but the first Spirit figure I owned was probably the 2005 G.I. Joe: Sigma 6 version. Spirit has had quite a few different looks over the years but the Classified version is a modernized take on his classic appearance. I believe that in one of their streaming events the Classified team discussed that they had Native American/Indigenous designers to help work on the figure and create the packaging art, which is pretty neat to hear. The G.I. Joe team was always quite diverse with at least three Native America/ Indigenous members that I can recall offhand (Spirit, Airborne, and Altitude) and it's cool to see these characters still part of the crew and being reimagined over the years. I find Spirit Iron-Knife to be one of the best examples of a figure that has kept the appeal of the vintage design while also being modernized with some cool new touches. Let's take a look at Spirit Iron-Knife after the break... 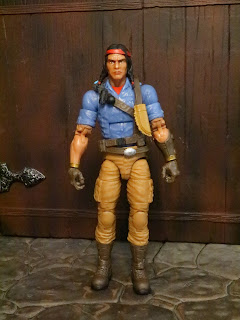 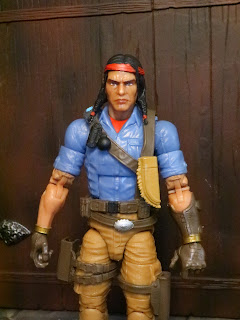 * Overall, Spirit captures the general look of the vintage figure: A blue shirt, khaki pants, and a red bandanna. It's a good look that really hasn't gone out of style and doesn't seem outdated. Of course, the detail on this Classified version of Spirit is truly updated with lots of cool extras like visible loops to keep his sleeves rolled up, differing textures on his pants and shirt, and a harness filled with pouches, sheathes, and useful equipment. 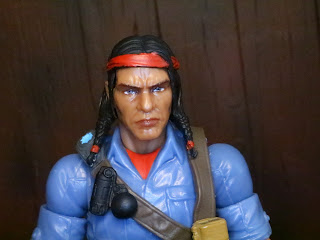 * Spirit is definitely in the top tier of the line when it comes to his portrait. It's fantastic with so much character in it. The work on his eyes is amazing, as it the detail in his braids. Hasbro's team nailed this portrait and just did an excellent job of capturing the character of Charlie Iron-Knife. 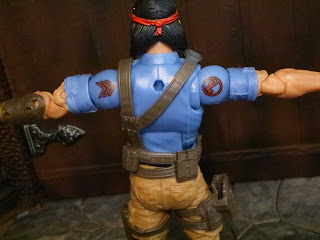 * Flip him around and you can see more details on his harness including some additional pouches and a few magazines for his pistol. The emblems on his shoulders are the same as on the vintage figure. Three chevrons on the left shoulder and a patch with a tomahawk on it on the right. 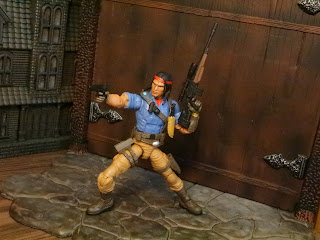 * The Classified Series has incredible articulation and Spirit is no exception. He looks great holding any of his weapons and has an excellent range of motion. These are without a doubt the most well articulated and highest quality figures on the market for the price out there. 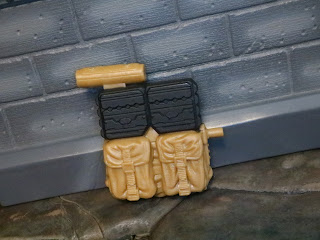 * Spirit's backpack is different from his vintage backpack. It still has two traditional storage pouches on the back but where the vintage had two cartridges for his automatic arrow launcher, this one seems to have two hard-shelled storage compartments. I wonder what he keeps in there? Extra magazines for his rifle? Survival gear? There is also a perch for Freedom, his bald eagle companion, but I'll show that off more in a moment. 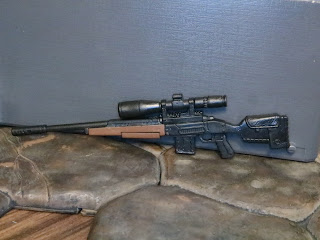 * Rather than an automatic arrow launcher, Spirit now comes with a simple scoped rifle. That seems way more fitting for a tracker or scout in a modern military unit. I like these kinds of modern upgrades that outfit the Joes with current and some cutting edge/ experimental gear. The rifle has a detailed buttstock, a bolt, a telescopic scope, and a flash suppressor on the barrel. It's very realistic looking though I'm not sure if it's truly based on a particular real world rifle. Maybe an M39? 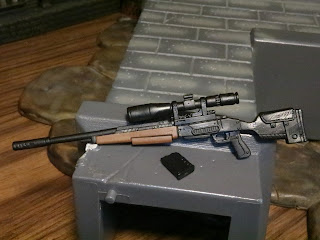 * The magazine on the rifle is removable as well, which is always just incredibly cool to me. 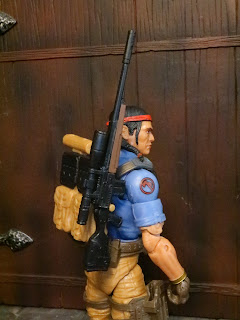 * Need to stow the rifle? There's a peg on the backpack which fits through the trigger guard. I guess this is what we're going to get now instead of pegs on the weapons. I do like it, though. It works fairly well and keeps Spirit's hands free. 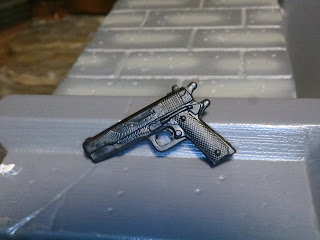 * His sidearm looks like a standard 45 caliber pistol, maybe a M1911A1, but customized with an eagle's wings motif on the slide. It's really how Hasbro is giving most of the Joe team some unique gear. It was uncommon for figures in the vintage era to share weapons with others between 1982 and 1992 and the Classified Series gets back to focusing on the unique gear of each character, something the modern 1/18th scaled lines often neglected. 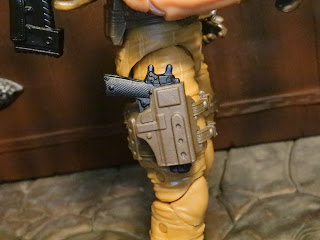 * Spirit's pistol fits snugly in this removable holster on his right hip. 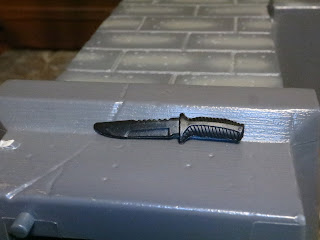 * Spirit comes with two knives, the first of which is a more standard tactical knife. It's simple, molded in black, and has some nice texture on the handgrip. 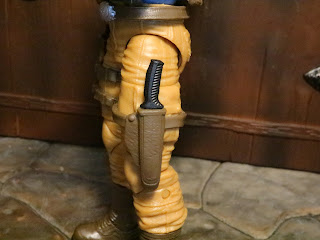 * It can also be stored in this leather sheathe on Spirit's left leg for easy access when needed. 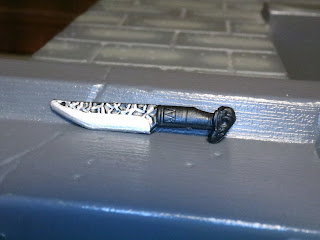 * The second knife is much more unique. It looks like something special, perhaps something Spirit made or was gifted. Maybe even something passed down in his family. The blade is uniquely designed and has a dark wash to bring out the details while the handle is also intricately designed with a bird skull on the hilt. 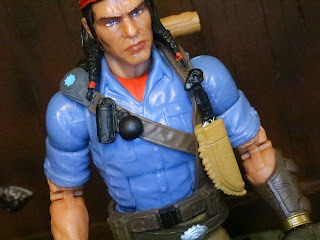 * This knife fits in the sheathe on Spirit's harness, along with two different grenades and one of the blue communications devices that the earlier figures all came with. I really hope Hasbro continues those as I love the uniformity of the communicator devices. Since the Joe team is usually all over the place it's cool to see something tying them all together (though a few figures have already came without the piece). 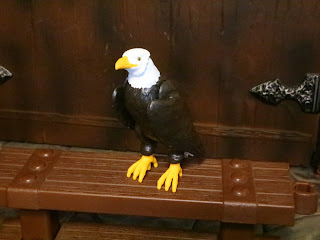 * Spirit isn't a deluxe figure but he comes come with an animal companion: Freedom, the bald eagle. Freedom is a decent sized figure and accurately captures the look of the animal. 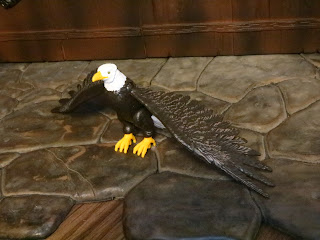 * Spirit actually comes with two sets of wings! One set is normal, as seen above, while the other set features his wings fully spread, soaring over the amber waves of grain and purple mountain majesties of this great country. They're attached via a simple balljoint and they work really well. This is just such a neat feature! 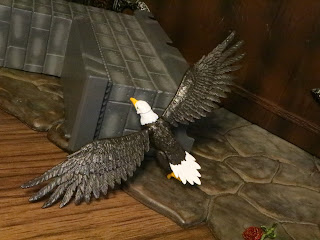 * Freedom is really well articulated, too. He's got swivel talons, hinged legs, balljointed wings, and a balljointed head. He looks fantastic both standing on a perch or soaring into battle. 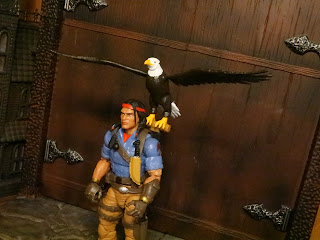 * Remember the perch on Spirit's backpack? Freedom fits on it quite securely. There's a peg n his feet, between his talons, that plugs into the perch. 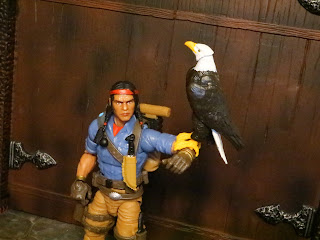 * Spirit is also wearing a falconer's glove on his left arm. It not only looks cool but it gives Freedom another place to perch. America! 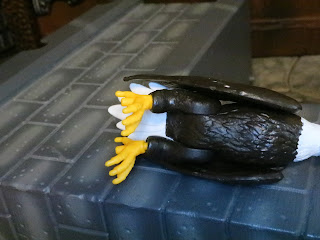 The Negatives:
* My only complaint is that one of Freedom's talons (the left one) is a bit loose. Not terrible, just looser than I'd hope. 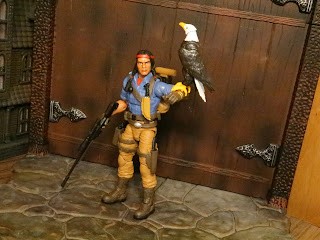 Spirit is absolutely one of the most impressive figures in the G.I. Joe: Classified Series yet. Just on his own Spirit is pretty amazing, but when you add in Freedom go to a whole new level. Spirit Iron-Knife is a heck of a figure and Hasbro really did a marvelous job. His headsculpt is incredible and his accessories are all top notch. Hasbro is really packing in the goodies with most Classified Series releases (I think the lack of accessories is what made most of the movie figures so boring!) and Spirit comes out like a champ. He's an Epic release in what is sure to be one of my favorite lines of 2022.


This is the first figure of Spirit Iron-Knife, AKA Charlie Iron-Knife, that I've reviewed. For more G.I. Joe Classified Series releases check out the following: