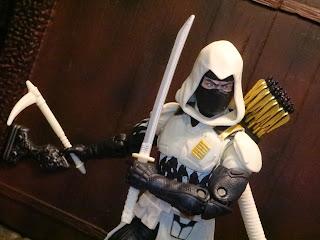 Hasbro's G.I. Joe: Classified Series might be one of the best lines of the year but it's also one of the most difficult to collect. Sheesh! The Amazon exclusive Arctic Mission Storm Shadow was a figure I was able to preorder but many other collectors have had some real trouble getting theirs. That's a shame, too, because this is not only a pretty cool action figure but it's also the first chance to get Storm Shadow in the line. We haven't even seen or heard about a regular release of the character yet though you can almost guarantee that he is coming at some point. While Hasbro has consistently placed Storm Shadow on the side of Cobra in every toyline and piece of non-comic book media they've put out since the end of the vintage A Real American Hero line, this outfit is actually based on Storm Shadow's 1992 Ninja Force outfit which he wore as a part of G.I. Joe and the leader of Ninja Force. He's a Cobra in the Classified Series, though, so this release gives you someone for Snake Eyes to actually battle with. Let's take a look at Storm Shadow after the break... 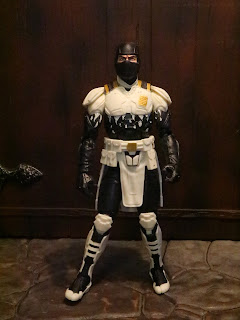 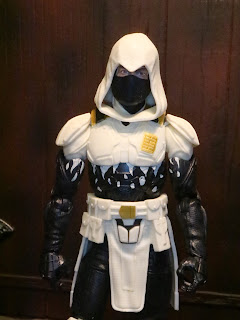 * I really love this look for Storm Shadow. It's a nice variant from Storm Shadow's traditional all white outfit while still feeling like something the character would actually wear. The armored elements of the outfit seem nicely integrated, not sticking out too much or appearing too bulky and overdone like some of the armored ninja figures we've seen in other G.I. Joe lines. The gold details definitely add a nice visual pop to Storm Shadow's appearance, too, while not looking overdone. They're actually very accurate to the vintage toy this one's based on, so that's a big plus. 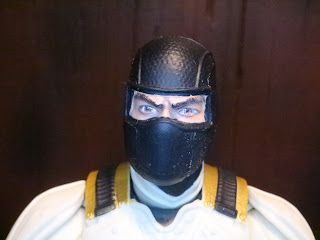 * Underneath Tommy Arashikage's hood is his masked face. He's wearing a somewhat more durable balaclava that obscures everything except his eyes. His eyes look excellent, making him look very determined and focused. You do not want to mess with Storm Shadow! 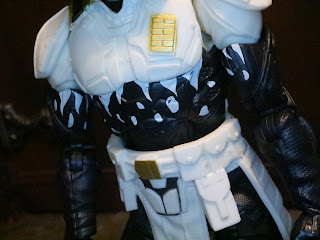 * There are lots of little details on Storm Shadow's outfit including pouches on his belt, various grooves in his armor, and a cool paint pattern which blends the white and black elements of his costume together. This is labeled as Arctic Mission Storm Shadow and I would imagine that the mixture of white and black would probably be helpful camouflage in cold, snowy regions. 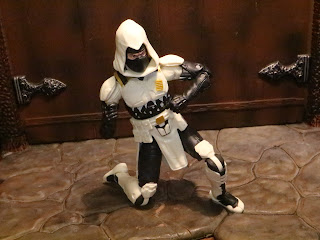 *  Storm Shadow is another strong figure in the line with excellent articulation. There are plenty of joints and they all move quite well. Hasbro has been on a roll for quite a few year now, making some of the sturdiest and most well designed 6-inch scaled action figures on the market. His shoulder pads are flexible, so his shoulder articulation isn't hindered, nor are his legs hindered by his belt that hangs down. Everything is very well thought out. 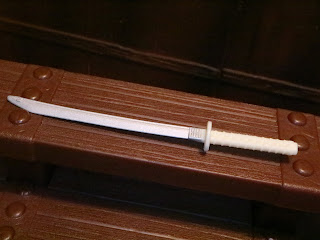 * Storm Shadow comes with a few ninja weapons and tools to aid him in battle. First up is a katana. The handle is white while the blade is silver.  This reminds me an awful lot of the Rise of Cobra version of Storm Shadow's sword although the Ninja Force Storm Shadow also wielded a white katana. It's a decent sculpt and the number one accessory you would expect to come with Storm Shadow. 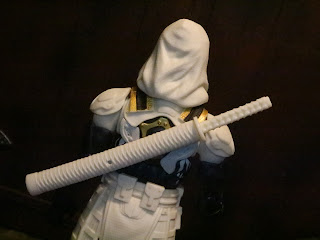 * Storm Shadow also comes with a simple white sheathe. It can plug into the hole on his back, allowing him to carry his katana around when he needs his hands free for other ninja stuff. 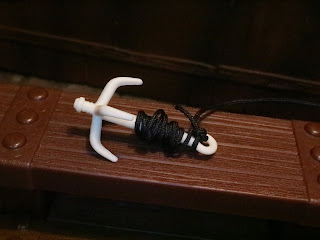 * When he needs to climb Storm Shadow can use this rather cool grappling hook. It's a simple piece with a fairly long string and you can put it in Storm Shadow's hands or wrap the rope around his waist or shoulder to have him tote it around. 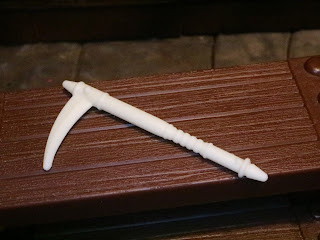 * The white kama is another accessory that the vintage Ninja Force figure came with as well, so it's presence here is quite welcome. While it doesn't have any paint applications, I really do like it. It makes a nice additional melee weapon for Storm Shadow and could probably also be used as an ice axe in a pinch 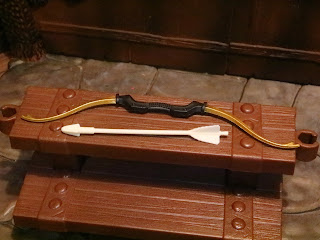 * Storm Shadow's last weapon is a bow and arrow. The bow does receive paint applications (a black riser with gold limbs) while the arrow is simply white. 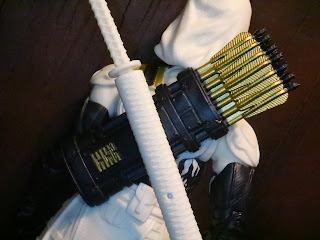 * Storm Shadow also comes with a very cool quiver with multiple arrows in it (they're not removable) and the Arashikage character on the back in gold. There's a hole in the quiver so Storm Shadow's sheathe can attach to the quiver, allowing him to tote both the quiver and the sheathe around. 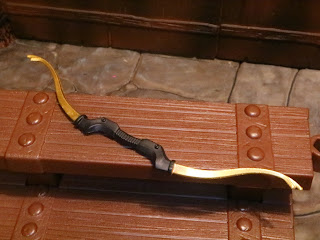 The Negatives:
* Storm Shadow's bow looks really cool but where is the bow string? There's not even really a place to add one on nor is there really a way to hold the arrow in place. That just kind of makes this a pretty useless accessory, doesn't it? 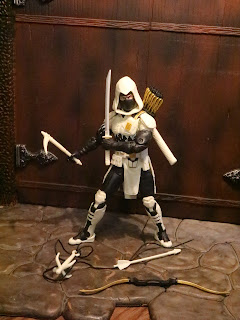 I almost passed on Arctic Mission Storm Shadow but I'm glad I changed my mind as he is one of the coolest figures in the line to date. With a killer design influenced by the vintage line, quite a few accessories, and fantastic articulation, I find myself picking up and posing Arctic Mission Storm Shadow over and over again. While we're waiting for Hasbro to announce a standard Storm Shadow (and lots more new figures), this guy certainly satisfies me as a worthy version of Storm Shadow. As a kid the only Storm Shadow I had was version 2, so I've always loved the hooded look for the character, This guy gets an Epic rating from me. It's just a shame that so many fans haven't been able to get their hands on him. Usually Amazon's exclusives are fairly easy to acquire but it seems that Hasbro greatly underestimated the demand for this new G.I. Joe line.
This is the first action figure of Storm Shadow I've reviewed on the site. For more reviews from the G.I. Joe: Classified Series check out the following:
Cobra Trooper
Destro
Duke
Gung Ho
Profit Director Destro
Roadblock
Roadblock (Special Missions: Cobra Island)
Scarlett
Snake Eyes