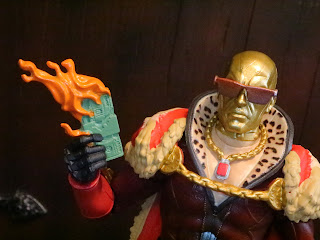 Destro had a few variants in the vintage G.I. Joe: A Real American hero line and many of them were more popular than the original. My preferred Destro was the 1992 Destro v3 but the Iron Grenadiers Destro was also extremely popular and wel loved by many fans. One of the strangest Destro variants, however, is a legend of an action figure known by fans as Pimp Daddy Destro. Pimp Daddy Destro (that's not his official name, by the way) was at one point a mythical action figure, kind of like the vintage Masters of the Universe Savage He-Man/ Wonder Bread He-Man. While Savage He-Man remains a complete and utter mystery, Pimp Daddy Destro's existence and history are now well documented and acknowledged by Hasbro. While Hasbo has never officially called the figure Pimp Daddy Destro, they did release two tribute figures in the 25th Anniversary collection back in 2007 celebrating the crazy variant and now we have a version in the G.I. Joe: Classified Series. Meet Profit Director Destro! A fan channel exclusive, Profit Director Destro is a flamboyant, money burning maker of mayhem who is available through online toy stores and places like GameStop. Ready to check out this over the top and wonderfully gaudy variant of Destro? Then join me after the break... 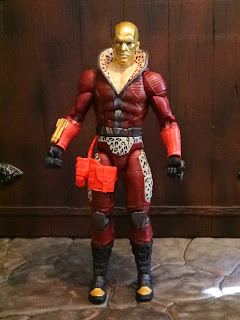 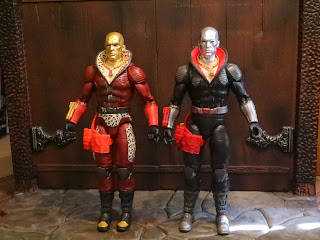 * Profit Director Destro (left) and the standard series 1 Destro (right) use the same sculpt. PDD is just a repaint of the previous figure although he does have quite a few unique accessories. 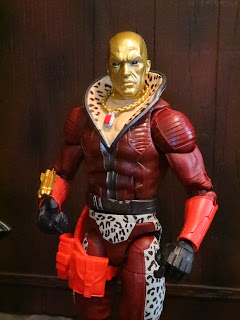 * Destro is a pretty impressive looking figure and the Profit Director variant ramps up that impressiveness to the next level. Rather than having a black suit he's now sporting a rich burgundy outfit accented with leopard print. It's a crazy, out there look that makes you wonder whether Destro is going to feed you to a tiger or spout off about how he's never going to financially recover from everyone of Cobra Commander's ridiculous schemes.

* Destro has the same articulation as most other figures in the line, so he's able to move and take posses pretty well. These are sturdy, well articulated figures. Easily some of the best toys on the market right now. 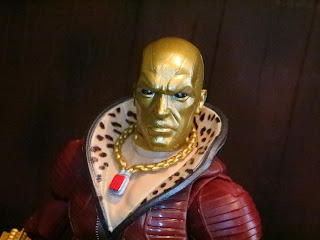 *  The headsculpt on Destro is still excellent. Typically Destro's head is portrayed as a metal mask, not a "living" metal face with expressions, and that's what we get here: A metal full facemask with a very stern expression. The metallic look is excellent and the armored collar of the mask looks like it has some bolts around it, too. Of course, now it's cast in gold. His cool medallion has a gold chain, too (it's removable if you pop off the head). 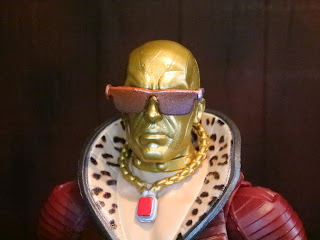 * To really bring the bling, Profit director Destro is wearing some very slick sunglasses. They're multi-toned and they let you know that Destro is the boss. Maybe he wears these when he plays world championship poker games? 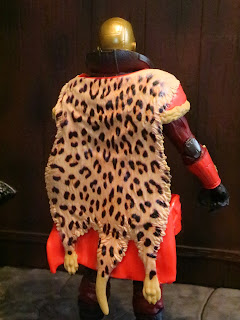 * To really show off  Destro comes with a leopard print cloak that sits over a cape. They're one single piece and they fit over Destro's shoulders quite well. Wait, that isn't just leopard print: That's actually a leopard pelt! C'mon, Destro! You know that fur like that just isn't cool. That's why he's one of the bad guys, folks. Maybe Destro purchased some pieces from Joe Exotic's wardrobe after he got sent upriver? 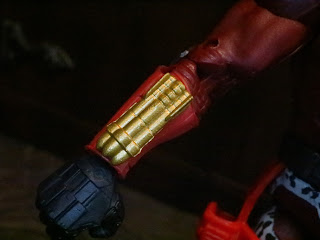 * Destro still doesn't have any grenades on his left wrist but he does have wrist rockets on his right. They're not removable (which would have been pretty cool) but they are a separate piece that stands out from the rest of the figure. They're also painted gold. That way Destro can destroy with panache! 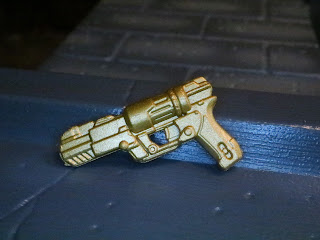 * There were no changes made to Destro's sidearm as it was already a very cool and rather futuristic looking gold revolver. This seems to fit Destro's personality quite well. It actually looks like a Nerf Barricade with elements of the Maverick revolver, too. 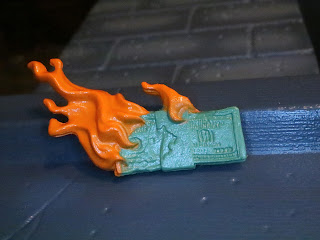 * Destro's so loaded he's got cash to burn. No, literally: He has a burning stack of cash. This is an awesome hilarious accessory that looks pretty fantastic in Destro's hands. If Cold Slither is Cobra's answer to rock and roll then Destro must be Cobra's answer to rap. Can you imagine Destro filming a rap video? I can. 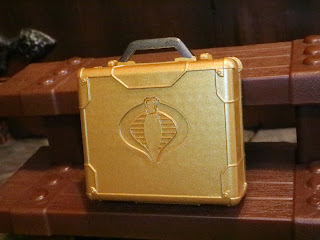 *  The original Destro came from 1983 came with a backpack he could wear that opened to reveal all sorts of weapons and gadgets. Hasbro has used a functioning briefcase multiple times with Destro over the years, most noticeable with the Sigma 6 Destro and the 25th Anniversary Destro. This is a very appropriately scaled briefcase with a very nice inlaid Cobra emblem on the side. The only thing that would have been better is if the Cobra logo had been glittery to look like inlaid diamonds! 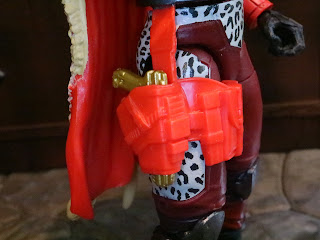 *  Destro's revolver fits securely in this cool holster on his right thigh. There are also lots of pouches sculpted on it, plus it's molded from a soft, rubbery plastic, meaning it moves with the figure and doesn't hinder the articulation. 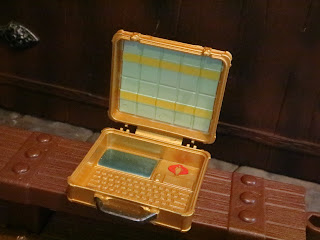 * Destro's briefcase is frankly pretty boring inside. The vintage Destro's pack had all kinds of cool gear inside and the Sigma 6 briefcase had a slide out machine gun, some pretty detailed currency, and a detailed computer. This seems pretty drab, though. Why does Destro need a computer in a briefcase these days? Hasbro is doing rail gun and lasers but still gives Destro a computer this large? Plus there's no detail on the money, something even the 1/18th scale line did pretty well. 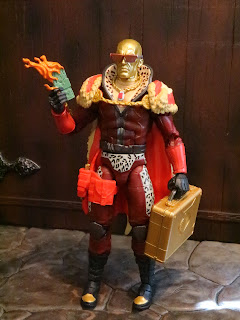 He's outlandish and over the top but, man, Profit Director Destro is definitely one of the best figures in the G.I. Joe Classified Series. He's as good as the standard figure but even better due to is extra accessories. Yeah, he's missing one of the guns the standard figure had, but this guy has a burning stack of cash, shades, and a pretty crazy cape. Looking like the villian in a G.I. Joe Tiger Force/ Tiger King crossover, Profit Director Destro is definitely going to stand out on your shelf. Since he's a Hasbro Fan Channel exclusive, he costs a couple dollars more but I found him at GameStop for $22.99 which is the cheapest I've seen him. He's a fantastic figure and one of the most fun releases yet. He's still available for preorder through a couple places, like BBTS.com, so check him out while you can. The G.I. Joe Classifie Series has been a somewhat tough line to collect, especially where exclusives are involved. This guy is pure Epic, so don't miss out.
If you're a fan of Destro also check out my review of the G.I. Joe Classified Series Destro and the 8 inch G.I. Joe Crime Boss Destro.
For more reviews from the G.I. Joe Classified Series check out the following:
Cobra Trooper
Destro
Duke
Roadblock
Roadblock (Special Missions: Cobra Island)
Scarlett
Snake Eyes