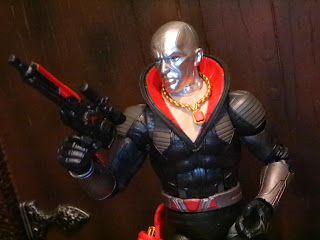 I'm a little surprised that the first series of G.I. Joe Classified Series figures only included one villain. Yeah, G.I. Joe's heroes are popular but the villains seem to be the characters that most everyone remembers. Since there are only five characters in the first series, Hasbro went with a split of four G.I. Joes and one Cobra: Destro! Destro was originally released as part of the second series of vintage G.I. Joe figures and ever since then he's always been a key part of the line, appearing in nearly every incarnation of G.I. Joe. Destro is one of the most "classic" looking figures in the line, bearing a great resemblance to his vintage predecessor. Let's take a look at the first Cobra in the line, James McCullen Destro XXIV, after the break... 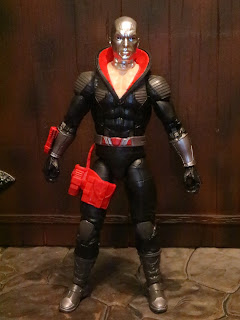 Accessories: Medallion, 2 pistols, and a briefcase. 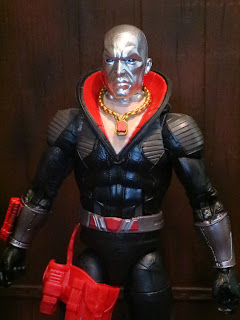 
* Destro is a pretty impressive looking figure. He's very accurate to the design of the vintage figure but with lots of modern flourishes. His slick collar is a nice, bright red and his medallion is a separate piece (it's also removable if you pop his head off). To help add some more visual appeal to his outfit Hasbro gave him some armored bits on his shoulders and chest. The gray details help break up the black and nicely complement the bright red highlights. 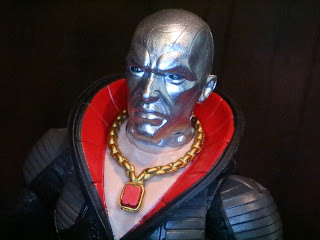 * The headsculpt on Destro is excellent. Typically Destro's head is portrayed as a metal mask, not a "living" metal face with expressions, and that's what we get here: A metal full- face mask with a very stern expression. The metalic look is excellent and the armored collar of the mask looks like it has some bolts around it, too. 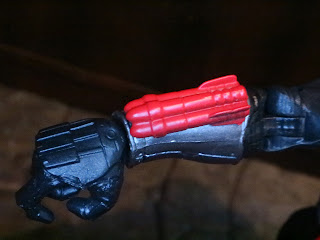 * While Destro doesn't have any grenades on his left wrist he does have his wrist rockets on his right. They're not removable (which would have been pretty cool) but they are a separate piece that stands out from the rest of the figure. 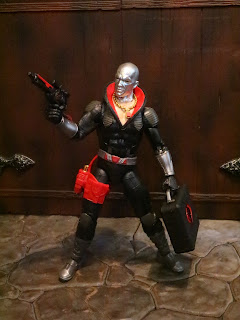 * Destro has the same articulation as most other figures in the line, so he's able to move and take posses pretty well. The G.I. Joe Classified Series are built quite a bit like the Star Wars: The Black Series figures so they're both sturdy and well articulated. One of the more interesting features about the articulation are the drop down hips. The hips are essentially balljointed hips with the balljoint being on a hinge. This allows the hip to go up and down, allowing for more movement but also preventing a gap between the hip and thigh when the figure is posed. 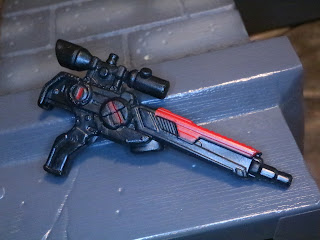 * Destro comes with two firearms, the second of which is this weapon. It kind of resembles a Stormtrooper's E-11, doesn't it? The weapon has a longer barrel, some snazzy red paint applications, and a scope on the top. I like the look of it but I do wish Hasbro would offer up some detail about the intention of each weapon. I'm guessing this is intended to be a modernized version of the vintage Destro's laser pistol. 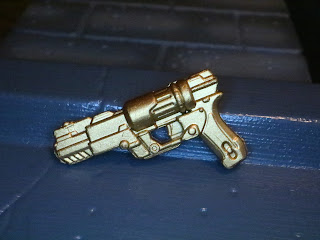 * Destro's sidearm is a very cool and rather futuristic looking gold revolver. This seems to fit Destro's personality quite well. I love the design here. It actually looks like a Nerf Barricade with elements of the Maverick revolver, too. 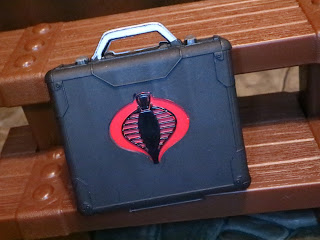 * The original Destro came from 1983 came with a backpack he could wear that opened to reveal all sorts of weapons and gadgets. Hasbro has used a functioning briefcase multiple times with Destro over the years, most noticeable with the Sigma 6 Destro and the 25th Anniversary Destro. This is a very appropriately scaled briefcase with a very nice inlaid Cobra emblem on the side. 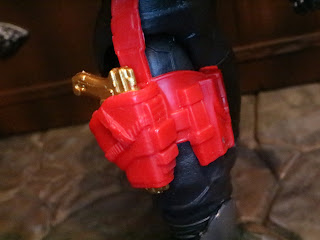 * Destro's revolver fits securely in this cool holster on his right thigh. There are also lots of pouches sculpted on it, plus it's molded from a soft, rubbery plastic, meaning it moves with the figure and doesn't hinder the articulation. 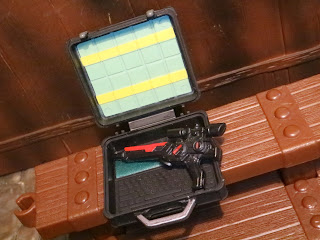 * Open up the inside of Destro's briefcase and it's frankly pretty boring. The vintage Destro pack had all kinds of cool gear inside and the Sigma 6 briefcase had a slide out machine gun, some pretty detailed currency, and a detailed computer. This seems pretty drab, though. Why does Destro need a computer in a briefcase these days? Hasbro is doing rail gun and lasers but still gives Destro a computer this large? Plus there's no detail on the money, something even the 1/18th scale line did pretty well. Heck, his gun doesn't even fit in here. 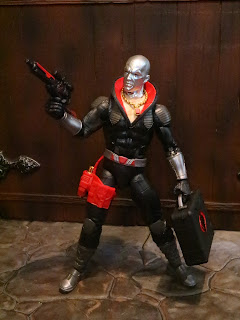 Destro's a very, very good figure. I'd give him a Great and a 1/2, actually, and he's well worth picking up. Destro himself is fantastic and his guns are great but, wow, that briefcase interior is dull. G.I. Joe: A Real American Hero thrived on cool, imaginative accessories, and I'm disappointed that this boring interior is the best Hasbro could come up with. I think it's demonstrably inferior to briefcases included with previous Destro figures. It's not a "bad" accessory, but it makes me a bit pessimistic that we will see intricate, well thought out accessories in this line. Still, I can't complain much about the figure himself and it seems that Hasbro plans to roll through the major villains quickly. When you have a Baroness, Cobra Commander, Storm Shadow, and Zartan, you know you'll want Destro standing alongside of them.


If you're a fan of Destro also check out my review of the 8 inch G.I. Joe Crime Boss Destro.