Action Figure Review: Heads of Eternia from Masters of the Universe Classics by Mattel 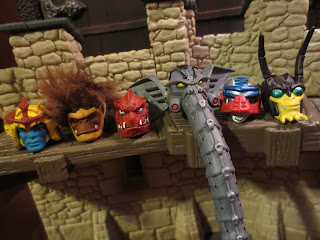 Despite what the title sounds like, this is not a multi-pack of action figures based on the various rulers of Eternia. It's literally a pack of six alternate heads that can be used on past Masters of the Universe figures. The Heads of Eternia accessory pack is actually the subscription exclusive item for the Club 200x sub and was just sent to subscribers in August of 2015. It includes alternate heads inspired by the 200x toyline and NECA Stactions for Roboto (October 2010), Grizzlor (October 2010), Buzz-Off (December 2010), Sy-Klone (April 2011), Clawful (July 2011), and Snout Spout (November 2011). Getting this item is actually a big deal. I'm not going to get into a long narrative, but here are the basic facts:

*Early in the MOTUC line a few figures came with alternate heads based on their 200x inspired looks.

*At some point after Whiplash, we were told that Mattel management would no longer allow these as they viewed the 200x line as a failure.

*Fans championed for a pack of alternate heads but were told it was too morbid.

*Recently we've been seeing more figures based on the 200x series and were finally shown the Heads of Eternia pack at New York Toy Fair 2015.

*Former brand manager Scott "Toyguru" Neitlich opened a thread on He-Man.org where he explained that various teams at Mattel over the years weren't in favor of 200x elements.

So, here's a pack we never thought we'd get that we now have. Want to see what these heads look like? Then join me after the break... 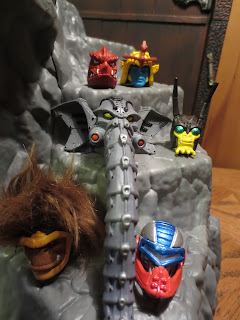 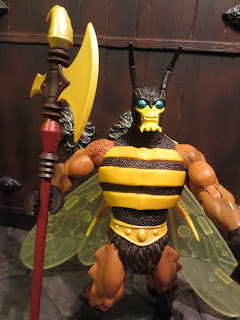 Buzz-Off was the last figure of 2010 and came out shortly after the 200x heads embargo was announced (to the best of my knowledge).  Buzz-Off was a figure that many fans felt had a head that was too friendly looking and had some somewhat comical looking fangs protruding from his mouth. The Buzz-Off figure came with his ax from the 200x toyline as well as the extra legs on his back. He was the first figure I really remember fans protesting that a 200x inspired head was a necessity for the character. I originally didn't think I'd permanently decide to swap the 200x head as I like the vintage helmet and goggles but, after looking at it, I'm keeping the 200x head on. 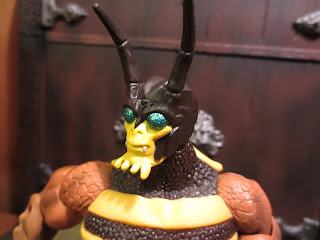 The 200x Buzz-Off headsculpt is much more insect-like than the vampire-bee vintage version. I've head a few folks complain that the colors on the new head don't match the new head perfectly, but I'm not sure that I can see it. The body has a brownish wash to it, so maybe that's what they're seeing. This Buzz-Off has some great antennae as well as a more angular headsculpt. I really like the new look. Interesting fact: Buzz-Off is the only character represented here whose vintage figure I didn't own as a kid. 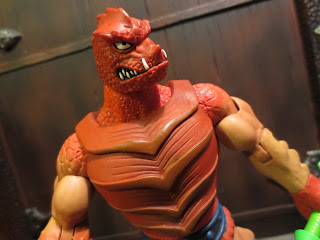 Clawful's headsculpt in MOTUC was the first (and perhaps only) headsculpt that I actively disliked. Rather than looking like a vicious crab creature, Clawful really does look like a Muppet. He has huge eyebrows and eyes that are so big you almost expect them to google around. The Clawful head was long demanded by fans. 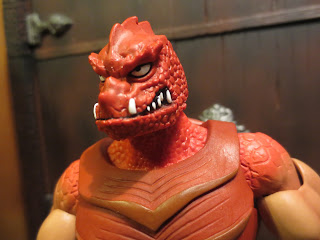 Fortunately, I think it turned out beautifully. The changes from the vintage head to the 200x head are so simple but they work. Gone are the oversized eyes and furry black eyebrows. Instead we have a terrifying sea creature that can stalk its prey on land. The color isn't 100 percent perfect, but it nicely matches the darker red of Clawful's shell in person. 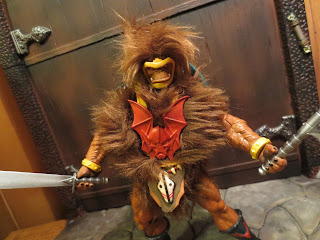 I've shared many times that Grizzlor is one of my favorite vintage and MOTUC figures. Before Grizzlor was released, ToyFare magazine (boy do I miss them!) showed some pictures of the upcoming figure. In the pictures, Mattel had accidentally showed an accessory that was cut from the final product: A Grizzlor faceplate that was based on the 200x NECA Staction which saw Grizzlor reimagined as a well armed hunter rather than a Critters inspired savage. 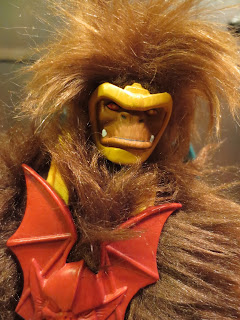 I like this redesign for Grizzlor but this is the one figure in this set whose original headsculpt I like more. Don't get me wrong, I always give my Grizzlor the weapons and tribal belt, but I love his original savage face as it is. The paint is really neat and clean on this, however, and he'd make a great army builder if you had a couple extra heads and Grizzlor bodies. The fur is soft and perfectly matches the previously released Grizzlor. 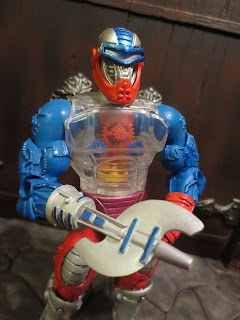 Robot's problems have long been documented: He was the first figure that anyone made a big deal about having reversed shoulders and many folks have experienced his chest cracking (mine still seems fine, knock on wood). I actually just bought a used 200x Roboto at a flea market last weekend and I have to admit that with the 200x head on the MOTUC body the figure really doesn't differ too much from his counterpart from the previous decade. 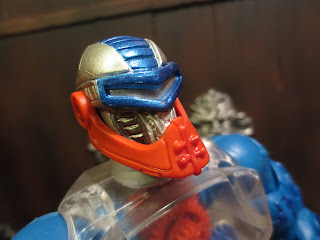 The Roboto headsculpt is nicely detailed, has a cool moving mouth, and some great circuitry underneath the jaw guard. I really like this one quite a bit. 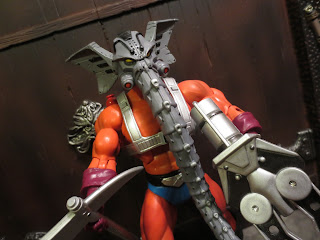 Here's the head everyone wanted! Not only was Snout Spout's 200x head much, much cooler than his slightly dopey vintage head but the original MOTUC head tended to break. Snout Spout was given a bendable nose but the foam material on it tended to crack and breakdown. Oddly enough, mine's still fine, but I like this headsculpt so much better. 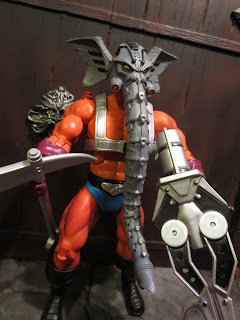 I've heard some folks complain that this doesn't suit the body, but I think it looks fine. It really is a beautiful sculpt (very, very similar to the awesome 200x NECA Staction) and features tons of cybernetic detail. Who doesn't love mechanical elephants? This is without a doubt the best head in the pack. 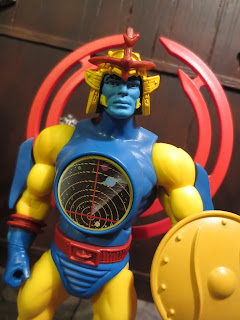 Last (and quite possibly least) is Sy-Klone. The vintage Sy-Klone was a figure that I somehow ended up having two of as a kid. When he was released in the 200x line he was given a cool red bladed weapon and a more samurai influenced vibe. The MOTUC version included the red blade but left off the samurai helmet due to the fact that the 200x line apparently slept with the wife of some Mattel executive or something. This set includes a 200x inspired helmet and it looks pretty cool. 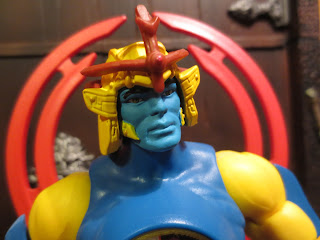 Something about it reminds me of the Nova Corps (I think it's the ornamentation on the front) and I like that. It's much more advanced and features some cool detail. Other than his chest radar, Sy-Klone is a fairly bland figure in my book, so this helps to give him some oomph. The red blades on his helmet look great. 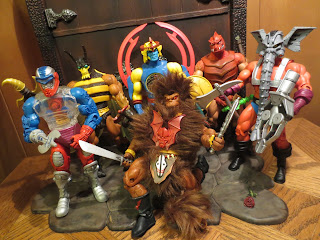 This was a really cool set. It should be no surprise to anyone who has been following my reviews for a while that MOTUC is pretty much my favorite toyline of all time. Despite the weird decisions sometimes made and the corporate double speak that happens, the line does things that no one else really does. Can you think of any other toyline that actually did a head pack? Fans always talk about this stuff, but who has ever done it? Plan B did it with the Special Forces line back in the early 2000s, but that's about all I can remember. This is an excellent set and is easily worthy of a Great and a 1/2 rating just for the fact that it happened and the excellent execution. Say what you want about MOTUC, but it's managed to do things that no other line has done or can do these days. At the end of the day, I'm using 5 of the 6 heads in this set to augment my previous figures. The only one I'm not using is Grizzlor as I just prefer the more savage look of the vintage head. If you haven't picked this up, you'd better move fast. I've head a lot of people even breaking sets up as there are plenty of fans who want one or two heads but not all of them. I'm not sure how popular this set will be in the long run, but I certainly appreciate it.