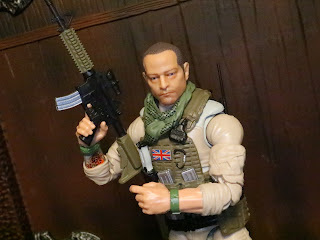 My birthday was a week or so ago and I ended up with quite a haul of action figures. Today I'm going to start checking out the cool new Action Force figures I received from the second series of releases. Let's star with Desert Rat, a figure based on Tony Roberts. Tony Roberts is the founder of Analog Toys, the director of the documentary The Story of Action Man, and served in both the Australian and British militaries, including as a member of the SAS. Desert Rat pays tribute to the guy by injecting him into the new Valaverse Action Man mythos as a member of the SAS who has come back to support Action Force. Pretty cool stuff! That has to be one heck of a dream come true for Roberts. The figure is really solid, too, and makes for a great addition to the line. Let's check out Desert Rat after the break and see what he brings to the fight... 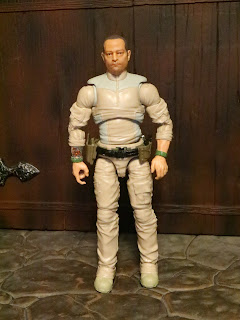 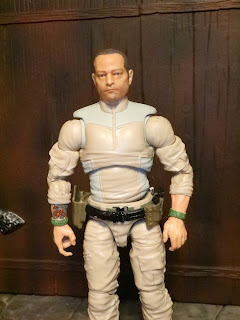 * Desert Rat features a suitably lighter color scheme with a tan and light blue shirt and some long khaki pants. The shirt and pants both have cargo pockets on the sleeves and legs, so he's got plenty of room to store stuff. Other figures have used some of these same parts (like the Steel Brigade trooper) but the colors are different and there are some cool new parts that set Desert rat apart. His sleeves are hiked up a bit and his pants cover his boots rather than being tucked in. 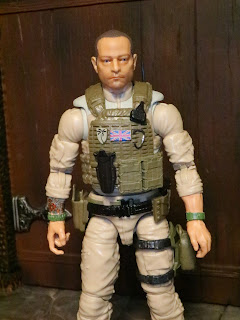 * Desert Rat comes packaged with his vest, belt, and utility pouch on. The belt isn't removable unless you disassemble the figure but the vest is easily removable;. much more so than the series 1 vests. It really completes the look and is a wonderfully detailed addition to the figure. 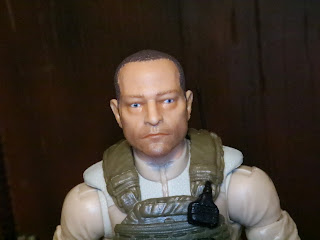 * The headsculpt really has a pretty goo likeness to Roberts. There are plenty of pictures of the guy floating around (he's a Youtuber, after all, and I think the likeness is pretty good. I dig the stubble quite a bit, too. It adds a lot of character to him. 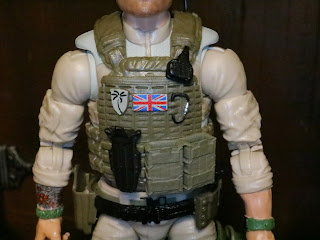 * Up close, Desert Rat's vest is even more impressive. Besides the fantastic detail and texture on the vest itself there's a radio handset, a carabiner, a British flag label, a sheathe, two pouches for extra magazines, and a cool patch with a palm tree. Anyone know what the shield shaped patch with the palm tree on it is for? 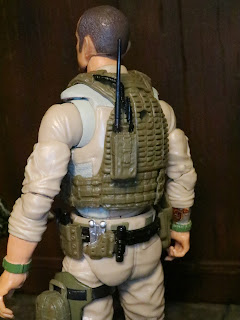 * Flip Desert Rat around and you can see more of the great detail on the vest as well as the radio attached to it. On the rear of his belt you can also see a multi-tool and what looks like a small flashlight. There's lots of cool detail on these parts and it gives the figures such a cool, tactical vibe. 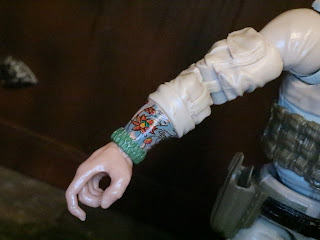 * The tattoos peeking out from under Desert Rat's right sleeve look really cool, too. It's yet another detail that really adds personality to this figure and keeps him from feeling like a generic, standard soldier. The colors are great and it's just a really standout addition. 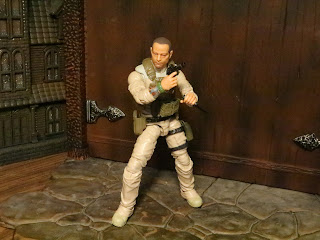 * All of the Action Force figures I've picked up so far have been built quite similarly. The joints and range of motion is excellent and everything here was A-OK right out of the box. I didn't have to do anything to loosen Desert Rat up. He feels really sturdy and well made and he's plenty of fun to pose. The vest still inhibits holding rifles in a firing position a bit, but this model of vest works a bit better and with enough messing around you should be able to achieve a pose you'll like. It's nice to see Valaverse continue to improve the quality from series 1 to series 2. 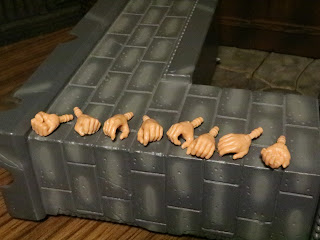 *  Desert Rat includes eight hands that you can swap out easily; I had no need to use my wife's hairdryer this time around. There's a pair of fists, a pair of pistol grips, a pair of standard grips, and a pair of cradling hands for holding the barrel of a rifle. 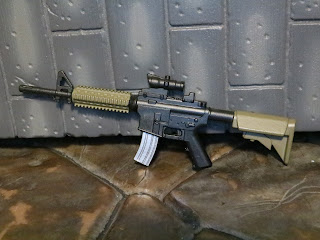 * Desert Rat comes with a very slick M4 Carbine with an ACOG site on top. The body of the weapon is black while the magazine is silver and the butt stock and handguard are greenish tan. It's a superb sculpt and a weapon that hasn't yet been included in any of the weapons packs. 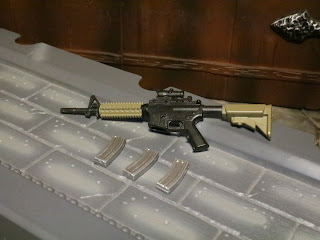 * The magazines is removable, too. The set comes with three total, so you've got two extras for Desert Rat to use. 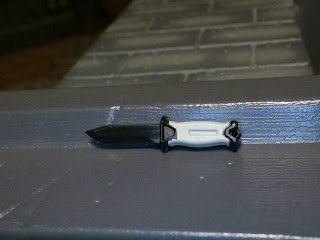 * This small knife is really cool. A sleek black blade and a bone white handle make for a cool combination. 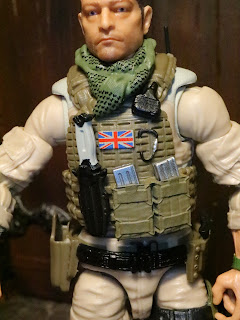 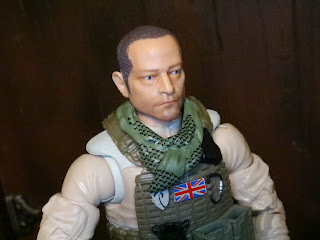 * Desert Rat includes a scarf for around his neck which I believe is called a shemagh. The G.I. Joe: Classified Series Sgt. Stalker also has one, though Desert Rat's fits better and has a unique print on it. I love how it adds another unique detail to Desert Rat's look. The Action Force figures reuse a lot of parts, so these little details really help to differentiate the individual figures. 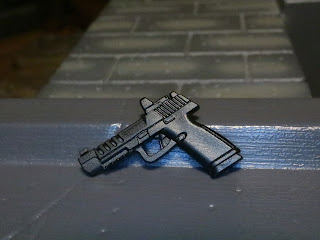 * For his sidearm Desert Rat comes with an all black pistol that looks to me like a Sig Sauer M17. This appeared in Weapons Pack Charlie and it still has fantastic sculpting and lots of cool detailslike the extended magazine, the slide, and the enhanced sight on top. 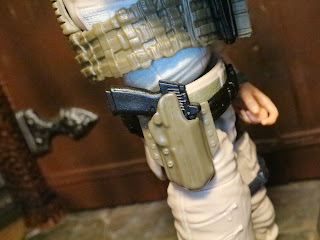 * The  pistol fits snugly in the molded holster on Desert Rat's right hip. It looks fantastic. There are even extra magazines sculpted onto the belt on the other side of the figure. 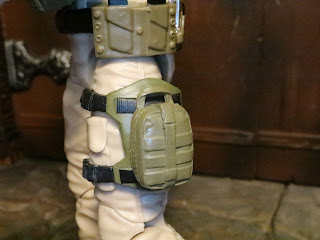 * On the left hip there is a small removable pouch that's no doubt stuffed with goodies. Other figures have included these but this one matches the color of Desert Rat's gear. 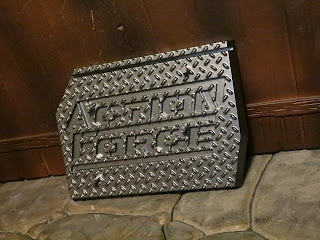 * I'm a huge proponent of action figures coming with display bases and Action Force's might be the best yet. The metal look of the display stand is fantastic and there are four pegs on the base, making it extra versatile. See that little slit at the back? If you want to cut out the file card from Desert Rat's package you can even display it behind him. I've actually picked up some of these stands by themselves from Valaverse, too. They work great with these and the Classified Series figures. 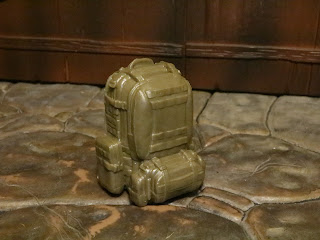 * Lastly, a backpack is included. It's a large pack with lots of pockets and straps for carrying everything Desert Rat needs. There aren't any paint applications but the detail is impressive. 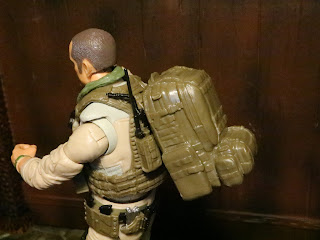 * My only problem with he figure is that the radio attached to the vest really interferes with the backpack. Yes, you can get it on, but it looks weird and sits at an awkward angle. It'd be nice if the radio were removable or if the backpack had a cut in it to accommodate the radio piece. 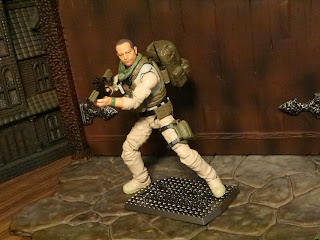 Desert Rat really impressed me and definitely deserves an Epic rating. I've loved most of the Action Force stuff I've picked up and Desert Rat is no exception. Honestly, he might be my favorite release yet. The paintwork is excellent, he's loaded with accessories and yet can carry them all, and he comes with a functional display stand. Action Force has hit hard this year and if it can get the third series of figures out before the end of year it's going to be a strong contender for the best line of the year. There's a lot of value here compared to other similar lines and the quality just keeps getting better.