Action Figure Review: Mysteries of Grayskull from Masters of the Universe Origins by Mattel 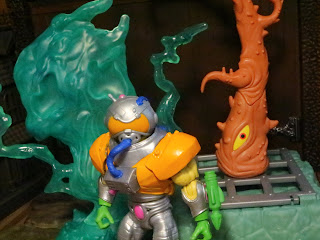 Are you ready for the Mysteries of Grayskull to be revealed? I sure am! Today I'm super excited to check out Mysteries of Grayskull, the second of the PowerCon 2021 exclusive Masters of the Universe Origins sets. The set was available directly through PowerCon as well as through Big Bad Toy Store and Mattel Creations. I ordered mine through Mattel Creations and just received this in the mail Thursday so this thing is fresh and hot. Mattel released the Origins Castle Grayskull earlier this year and I was very impressed with it. It's a fantastic playset at a very affordable price and while it came with some great stuff it was missing a few things that fans may have been, such as the classic space suit that stands on the second floor. The Mysteries of Grayskull set is designed to add to your Origins Castle Grayskull (or, heck, you could add these to the vintage or Classics Grayskull, too) and thus it's an accessory pack with some very substantial pieces. This is one of my favorite toys released this year as it's so versatile and well done and really captures the feel of the early years of Masters of the Universe. Let's take a look at the Mysteries of Grayskull after the break and see what is revealed inside the Ancient Fortress of Mystery and Power... 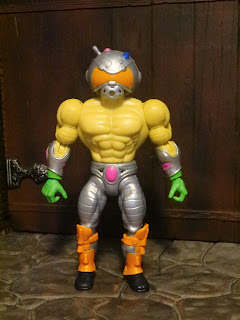 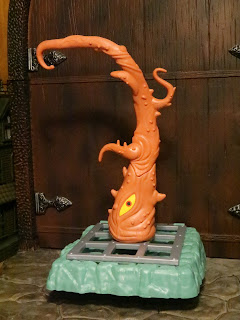 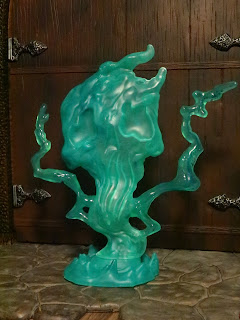 The Facts: Spirit of Grayskull 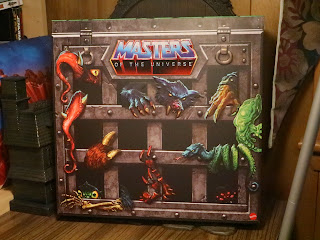 * Like most MOTU convention exclusives, the Mysteries of Grayskull comes in incredible packaging. The cardboard mailer is printed to look like wood, perhaps like a chest, while the interior box inside has the dungeon grate from Castle Grayskull on it. It's amazing and a piece of art itself. You'll definitely to want to hang on to this art for sure. 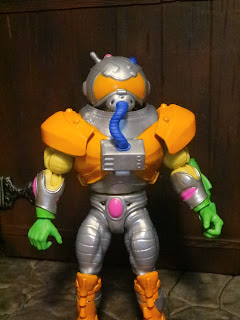 * Let's start with the Explorer Space Suit which in this set is a fully articulated figure. In the vintage Castle Grayskull playset from 1982 the space suit/ robot was simply a cardboard piece. For MOTUC Mattel actually made it a sculpted plastic piece but here it's even better! This looks so much like Rebecca Taylor's artwork from the vintage playset come to life. It's not quite as trippy as her design but it's still pretty solid with bright, bizarre colors and a great sculpt. The Explorer Space Suit is built like a standard figure with a large armor piece over a standard torso. The waist, thighs, and forearms all seem to be new pieces, as are the head and the torso. The blue tube on the chest is rubbery and attached to the box on the chest. It plus into the mouth of the helmet. 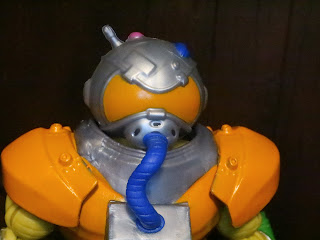 * The helmet is so cool. It's bulbous enough to imagine a character inside and you could pop it off and place another head on there if you wanted to. The visor is nice and wide and there's lots of bibbly bobs all over the top. 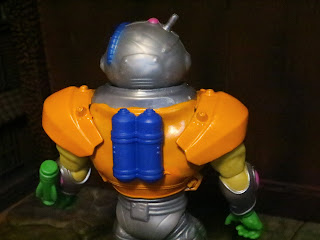 * The back of the suit shows off what are presumably some sort of air tanks. Maybe oxygen? Maybe something else? The shoulder pads are softer and do move nicely when you move the shoulders, allowing the figure to be about as well articulated as anything else. 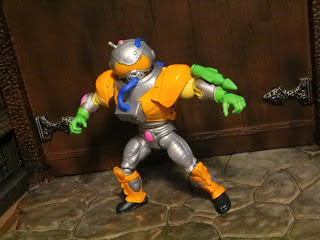 * The Explorer Space Suit is no different from the other MOTU Origins figures: Built like the vintage toys but with modern articulation. While their bulky frames make the articulation a bit clumsy, they do feel like an evolution of the vintage line. Imagine what you would get if you mixed a vintage figure with a MOTUC figure. They're quite fun to play with.
* They're also modular and can be easily separated to make your own lazy boy customs! 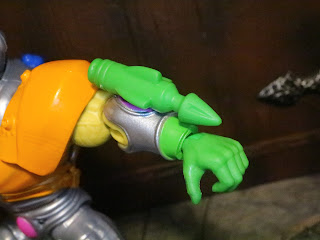 * One of the laser rifles from the Grayskull weapons rack is posed near the space suit on the vintage cardboard piece, but you'll have to borrow that from elsewhere. The rocket on the space suit's left arm is included here. it definitely looks more like a small, self launching rocket or missile rather than a laser blaster. 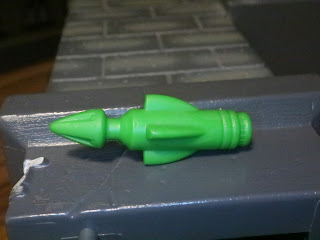 * It's also removable! Pop it off and let it fly at the bad guys. or good guys. I guess whoever takes control of Grayskull gets to wear the armor. 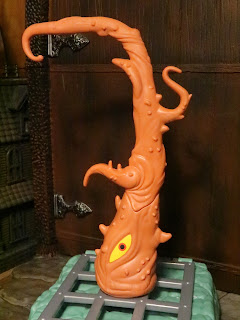 * The second piece will check out is the Orlax of Primeria. What exactly is the Orlax of Primeria you may ask? Well, it's something both very old and very new to MOTU lore. The vintage dungeon sticker (also known as the Dwell of Souls) does have this tentacle creature with an eye on it (in the top left corner of the sticker) so it's been around. In the MOTU Revelation prequel comic book, the creature has been given the name the Orlax of Primeria and is an important part of the plot. The Orlax of Primeria has even showed up in part 2 of Masters of the Universe: Revelation. It's pretty cool that Mattel included this hear and it looks fantastic. The Orlax is a solid piece that is made of harder plastic on the bottom and from a bendy rubber on the top. The base of the Orlax can plug into the top of the dungeon grate to keep it standing up straight. 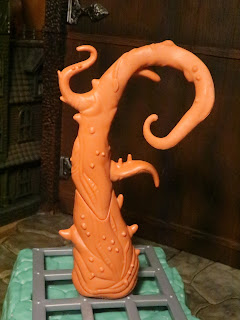 * The main tentacle body of the Orlax of Primeria is bendable. It's not crazy bendable but it does give you the chance to get the creature positioned how you like to fit your display. 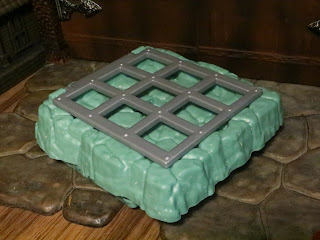 * The dungeon base is Grayskull green (it is part of the castle, after all) and has a hinged grate. It's quite cool and whether you use it for the Orlax or on its own it's a petty decent extra. 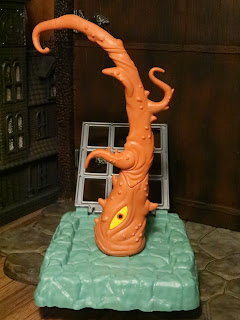 * You can even lift the grate and have the Orlax propped up here as well. It plugs right into the base. 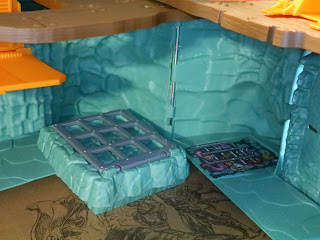 * The dungeon grate has is constructed so that it can slide onto the bottom of the Origins Castle Grayskull. It doesn't seem to fit anywhere specific (unless you really want to cover the Dwell of Souls sticker) so you can move it around on the first floor. 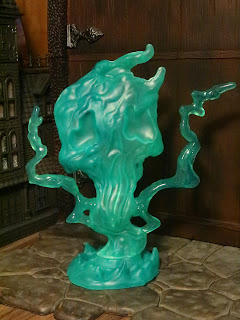 * Last up is the Spirit of Grayskull, the manifestation of the castle. Depending on your fondness for the 200x and MOTUC canons you might equate this with the Spirit of King Grayskull himself. The Spirit of Grayskull showed up in the early minicomics in this form and it's been a popular item for customizers to make. I'm really thrilled that Mattel has finally made their own version. Cast in translucent greenish-blue plastic and looking like a ghostly skull, this is a really cool item. There's no articulation here: This is simple a set piece to make your castle look even more amazing on display. I'm sure it would look pretty boss with the MOTUC Grayskull, too, which is probably where I'll put mine. 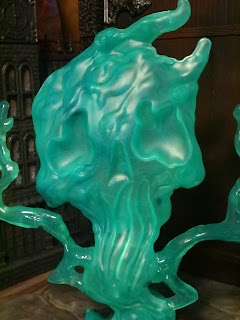 * Here's a closer look at the face. I love how the sculpt actually looks kind of hazy and ethereal, like a spirit. 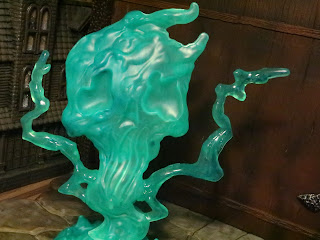 * The wisps of energy (or tendrils of ectoplasm) coming off of the Spirit of Grayskull are cast in rubbery plastic. I think that keeps them from being brittle rather which is a solid design choice. 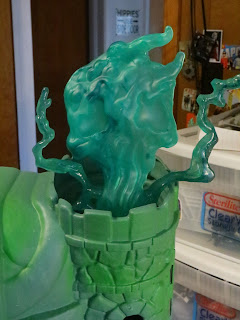 * The Spirit of Grayskull has a hole on the bottom and can be attached to the highest turret of the Origins Castle Grayskull. The base is nice and large, though, so you could really put it on top of any Castle Grayskull you own. 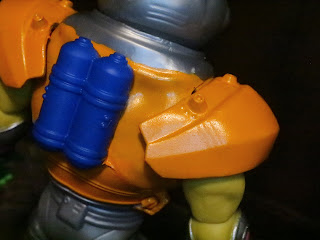 * My negatives with this set are few but I do want to point out that the orange paint on the armor is a bit uneven in spots with some places being darker and lighter than others. 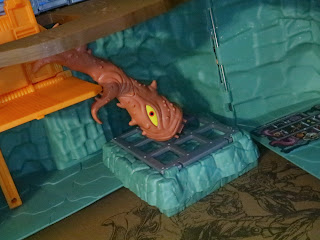 * The Orlax of Primeria is really cool but there's just no way to have it attached to the base while having the base attached to the castle. It's too tall, even with it's tentacle bent over. If you're displaying this you'll have to put it somewhere else. 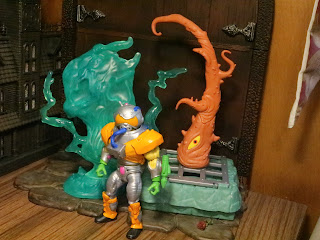 When I said that the Mysteries of Grayskull set is one of my favorite toys of the year I wasn't kidding at all. This set is amazing. For $30 bucks you're getting a full figure (with lots of new parts) who has never been released as an articulated piece before, the very solid Orlax of Primeria, and the Spirit of Grayskull, which is kind of a dream piece for me. Usually the convention sets and exclusives are overpriced but this set really and truly seems like a value. This is just amazing and feels exactly like the mixture of old school meets new ideas that Origins needs to be. This is an Epic set that should supplement almost any Castle Grayskull in your collection.

Surprisingly the only other King Grayskull figure I've reviewed is the MOTUC Spirit of Grayskull.