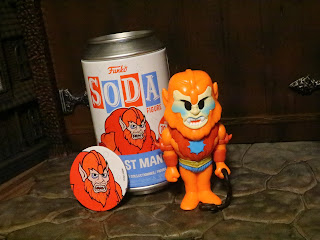 Time for the fourth stop on this Vinyl SODA Masters of the Universe Mini Marathon and it's Skeletor's right hand man: Beast Man! Biff Beast Man appears in pretty much every MOTU thing ever (well, except for New Adventures) and is usually one of the first characters made in any toyline. It took over a year to get to hm this time but now he's here. He's also a standard release rather than an exclusive, so you shouldn't have any trouble getting your paws on him. There's a variant (flocked) and the standard release out there but it's just the standard release I'm checking out today. Like some of the other recent Vinyl SODA figures I picked up Beast Man "opened" for less than retail price. That's not bad at all in my book. I wouldn't mind a flocked Beast Man but for what I paid I'm very satisfied just to have this furry orange guy chilling on my shelf. Let's check out Beast Man after the break... 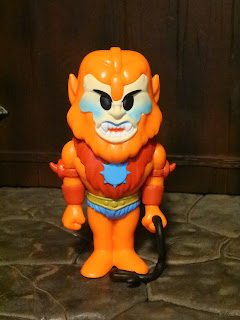 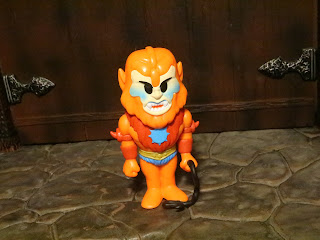 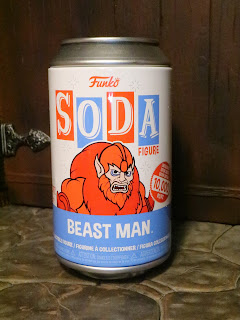 * I'm still loving the cans these come in! The soda can design is incredibly cool and makes for a rather unique display piece on a shelf. What would Beast Man soda taste like? It has be orange. Maybe a very tangy orange, almost like a blood orange soda. You know. Give it some bite. The can displays all of the expected labels while the back shows off the figure and includes all of the legal info, etc. The top of the can separates so you could use the can to store trinkets as well, and it's even sculpted to look like the top of a soda can. It's made from a much more durable metal than your average soda can, too, so it's quite a nice collectible. 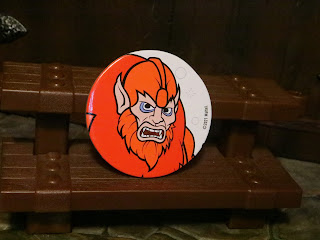 * Inside the can is a round, sturdy cardboard disc. It's kind of like a POG, though a bit larger. On the front is Beast Man's handsome mug while the back has the figure's name and the edition size. 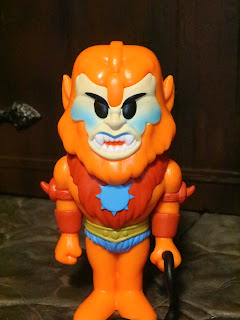 * Here's Beast Man! He's orange! He's wild! He's wearing a furry red collar! Yup, this is Beast Man alright. He's very recognizable and fits in well with the rest of the line. U don't always find Beast Man the most exciting character visually, especially compared to some of the other wild MOTU characters, but Funko captured his likeness nicely. 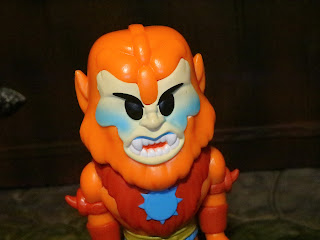 * I really do like his headsculpt, though. It's nicely monstrous with nice work on his cheeks and his teeth. This is a pretty impressive looking Beast Man as it really captures his likeness well in the stylized aesthetic of the line. 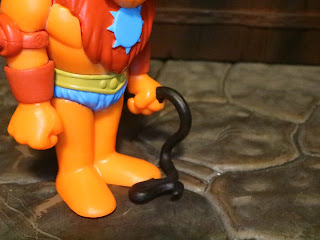 * Beast Man always carries his whip with him and so he has it here. The end of it is lying loose at his feet. I suppose the whip is always included since Beast Man has the power to control animals and such, so he's kind of like an Eternian magical lion tamer. Right? Do you think that much thought went into the creation of the character or was he just given his whip because it was already available from the Big Jim figure The Whip? 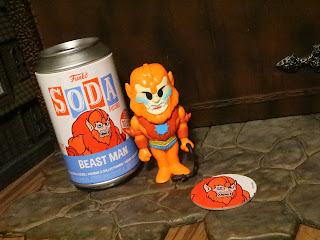 If you're a Beast Man fan I think you'll be plenty happy with this Vinyl SODA rendition of him. He's not as impressive as some of the other more complex figures released lately but he's really well done with all of the core elements of the character's design. He's pretty Great and adds another key Evil Warrior to the line. There are still some A-list villains remaining (Evil-Lyn, Tri-Klops) so hopefully they'll be joining Beast Man soon. We're down to one Vinyl SODA left so join me soon as I check out Tung Lashor....