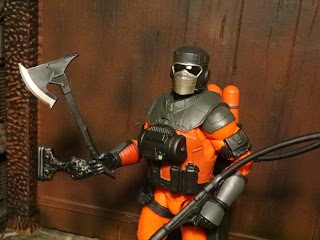 This is it folks: The last review of 2021. Yeah, yeah, I'll be wrapping up 2021 releases well into January but, still, this is the last review for the calendar year and we're going out with a bang. Yes, folks, it's Barbecue from Hasbro's G.I. Joe Classified Series. Hasbro has once again immortalized me in plastic form though, oddly, they left off the 17 from my name and for some reason added the name Gabriel Kelly in there. Who the heck is that, right? It should say Barbecue "Barbecue17" 17. Yeah, that would be more correct. I've had Barbecue for two months now (he showed up during the week of Re-Halloween) and I've had lots of time to go mess around with him. He's really quite cool though, sort of like the Funko POP! Dr. Ian Malcom, he does tend to get himself into all kinds of crazy situations. Barbecue is part of the Target Exclusive "Cobra Island" series but he's been a bit easier to find than most figures. That's because Hasbro didn't underestimate the popularity of this guy. They knew he'd be both a hit with collectors and the ladies. I've also heard he was the most popular toy this Christmas and is expected to become the must have accessory for Spring 2022 fashion. Let's take a look at what might be the greatest action figure ever made, the G.I. Joe Classified Series Barbecue (17), after the break... 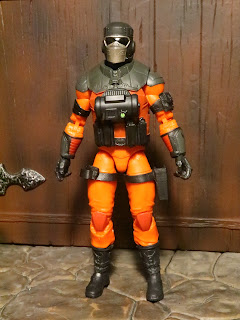 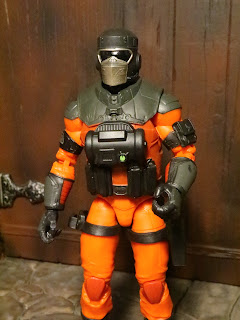 * The 2021 G.I. Joe Classified Series figures definitely seem to be more focused on updating the vintage designs rather than creating something completely new. Barbecue is a great update of the vintage G.I. Joe: A Real American Hero version of Barbecue that I had as a kid. He's got the similar costume (part of the figure is built using Destro) but is more padded and has more gear on his suit. He appropriately looks bulky like someone wearing a pretty heavy duty suit (and not a reflection of the extra pounds I've put on from eating Christmas candy and other goodies) and has a fantastic paint job. 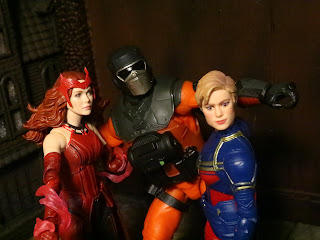 * It's tough to capture in photographs but this figure possesses a charisma level I've never seen on any other action figure. He's just magnetic. A raw, animal-like magnetism, you might say. I was wondering why Hasbro has been asking me to send them vials of my sweat over the past year or so but I think they mixed my natural aura into the plastic somehow. . 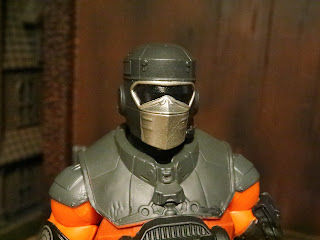 * Check out that likeness! OK, just kidding. That's just a helmet. It's an awesome helmet, though. The visor is excellent and this whole contraption really updates the vintage portrait nicely. 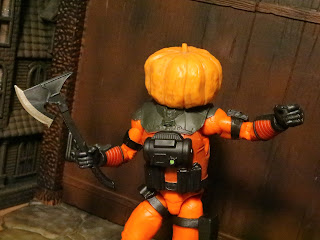 * What's Barbecue look like under that helmet? Here you go! Yup, just like me! It's probably the greatest portrait Hasbro has ever done. I've heard they contracted out the Hot Toys team and the staff of Madame Tussauds to capture my every detail. 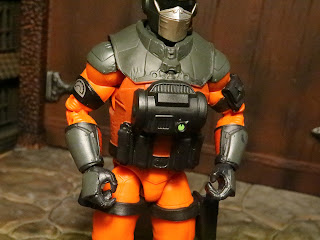 * Barbecue's outfit is covered with excellent detail. Besides the necessary breathing tank on the chest he's got lots of armored plating, a gauge of some sort on his right bicep, and pouches for useful gear all over his torso. You'd probably think they're for fire suppressant refills, First Aid kits, and other stuff, but I'll tell you what's really in there: A flip phone, some toothpicks, and a Nintendo Switch. 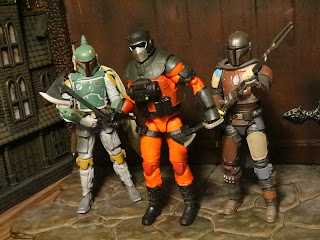 * Barbecue looks fantastic with the G.I. Joe team but I've noticed that all of the Mandalorians have also started following him around. He's a natural leader and warrior who has earned their respect. 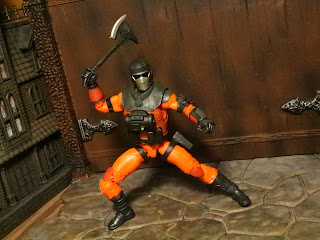 * Barbecue has the same articulation as most other figures in the line, so he's able to move and take posses quite well. The G.I. Joe Classified Series are built quite a bit like the Star Wars: The Black Series figures so they're both sturdy and well articulated. One of the more interesting features about the articulation are the drop down hips. The hips are essentially balljointed hips with the balljoint being on a hinge. This allows the hip to go up and down, allowing for more movement but also preventing a gap between the hip and thigh when the figure is posed. 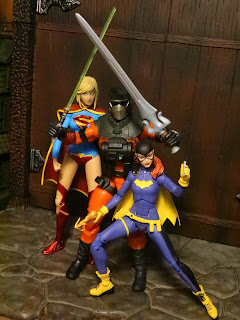 * Maybe my figure is different from yours but mine came wielding a lightsaber and a Power Sword. Could be a variant or something. He's got the power of the Force and the Power of Grayskull. And the power of love. Don't forget that. 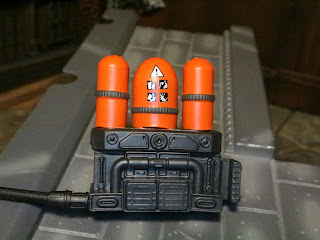 * Every Barbecue comes with this really cool backpack that has tanks filled with various fire suppressants. There are even some fantastically detailed icons to show off what sort of fire (chemical, wood, oil, etc.) the tanks can be used for. 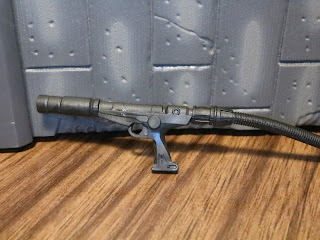 * To deliver the fire suppressant Barbecue comes with a fantastically long hose and a sprayer gun. I'm pretty sure he can take this off and use it like a suppressed pistol, too. Just like James Bond. 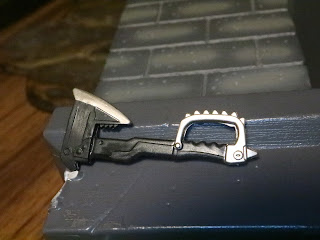 * When he really needs to crack some skulls/ fight the forces of evil/ defeat the legions of the undead/ Barbecue can use this super hands axe. Is this a high-tech axe or what? Spiked knuckles? A skull cracker on the bottom? A blade that looks like it's from the future? Yeah, this is the stuff all right. 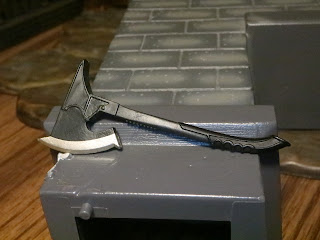 * Every time Barbecue has to pull out his second axe and get to some fire fighting he yells "Now there are two of them!" 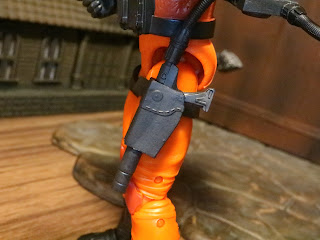 * When not using his sprayer gun you can holster it in his left hip. The holster is a separate piece but it isn't easily removable. 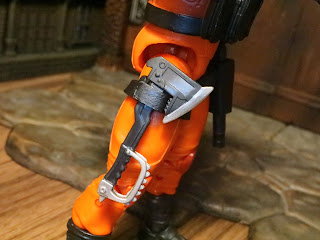 * The smaller axe can fit into a clip on his right hip so it's always nearby and at the ready. 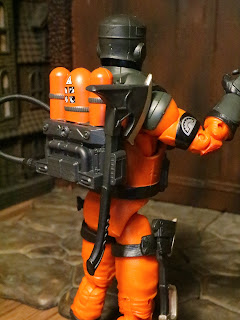 * The large axe clips perfectly into a slot on the backpack so Barbecue can have his hands free when he needs to play video games, write reviews, eat tacos, pet his dogs, or save the world. 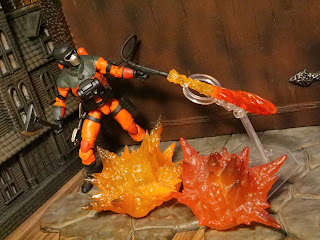 * As a kid I didn't realize Barbecue was supposed to be a fire fighter. I always thought he was a flamethrower trooper. Maybe that's why mine has the special ability to both shoot fire suppressant and flames. Yours probably won't but mine does. Roasty toasty. 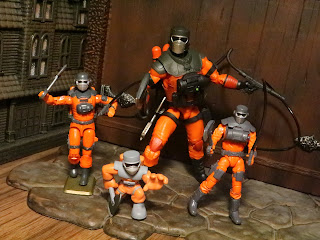 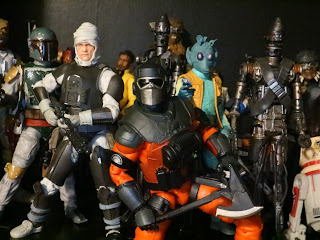 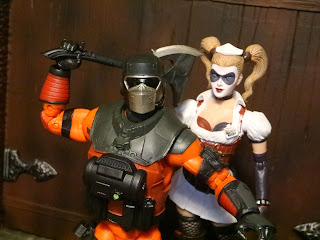 * In honor of this fantastic action figure, I've invented a new rating category. Epic17. Yes, this figure gets an Epic17 rating. It's amazing. The best ever. You'll love it. I hope you bought one for every member of your family for the holidays because it's what they all secretly wanted. And some not so secretly. 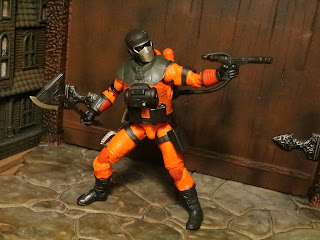 I really do think Barbecue is an Epic figure. He has some fantastic accessories, a great sculpt and design, and really adds something unique to the Classified Series. I really am quite surprised that Hasbro has released him so early in the line but I'm thrilled that they did. Barbecue had a few variants in the vintage line (Slaughter's Marauders and Eco-Force) so he was no one hit wonder for sure. Hasbro really did a nice job on this one and he brings a unique role to the team they've established in Classified so far. An un-helmeted head would have been nice but what we've got is pretty impressive.