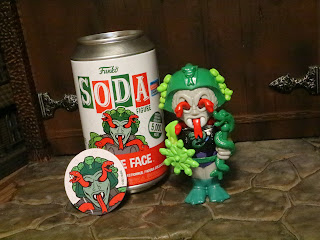 It's part 3 of my Vinyl SODA Masters of the Universe Mini Marathon and this time we're checking out one of the Snake Men: Snake Face! Interestingly Funko releases Snake Face as a NYCC 2021 exclusive as both a POP! vinyl and as a Vinyl SODA figure. I reviewed the POP! version of Snake Face just a week or two ago so let's move on to the Vinyl SODA figure. It's cool seeing the Snake Men get some attention lately as they often don't get the attention that the other MOTU factions do. Unless you count Kobra Khan (which is iffy), Snake Face and Tung Lashor (he's coming soon, too) are the first of the Snake Men released in Vinyl SODA. We're only missing representation from the Evil Horde now, right? I'm sure we'll seem them soon. For now, let's begin our study of the Snake Men after the break... 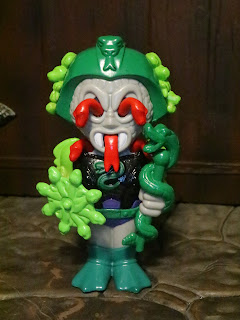 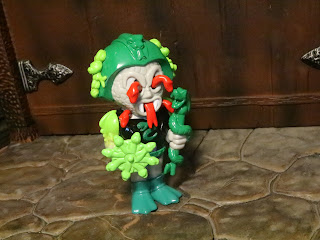 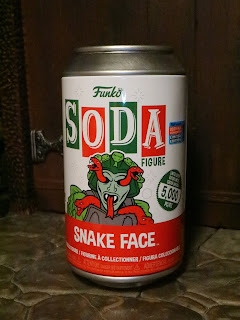 * I'm still loving the cans these come in! The soda can design is incredibly cool and makes for a rather unique display piece on a shelf. What would Snake Face soda taste like? I'm thinking it should be a green soda, sort of like a very tart lime. Maybe even with some "bitters" in it to give it a paralyzing flavor. The can displays all of the expected labels (including a con label) while the back shows off the figure and includes all of the legal info, etc. The top of the can separates so you could use the can to store trinkets as well, and it's even sculpted to look like the top of a soda can. It's made from a much more durable metal than your average soda can, too, so it's quite a nice collectible. 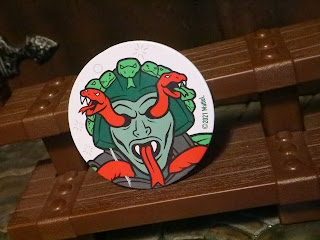 * Inside the can is a round, sturdy cardboard disc. It's kind of like a POG, though a bit larger. On the front is Snake Face's gruesome visage while the back has the figure's name and the edition size. 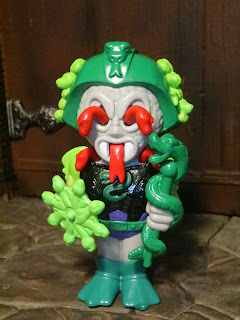 * Snake Face is pretty cool looking. He's very busy which matches the vintage toy perfectly. He's got snakes popping out of his face, complex armor, and interesting green, gray, and black color scheme, and even some purple highlights. He's even sporting two weapons! Funko did a nice job on his armor (it's tough to see behind his weapons and tongue) and his arms are cool with a mixture of gray and light green near the ridges. 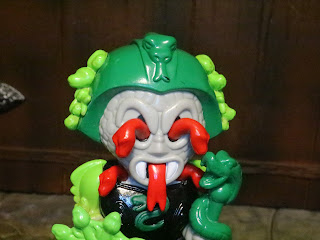 * The vintage Snake Face featured pop out eyes and a tongue and that's what we've got here. He's sort of got a Medusa thing going on and both his helmet and face are all really well sculpted with neat, clean paint applications. This guy's pretty impressive. 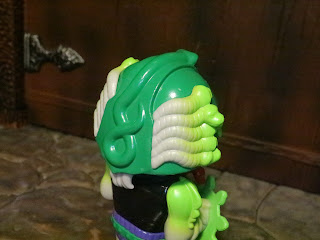 * Flip his helmet around and you can see a snake design on the back with more snakes on the sides. Creepy! 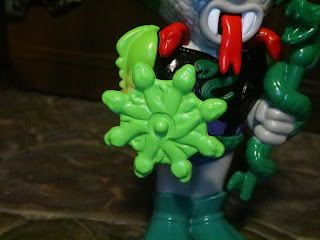 * His right hand is carrying his snake shield adorned with sculpted snakes. 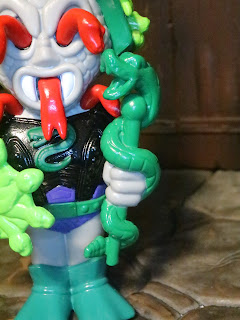 * Snake Face's right hand is carrying the staff of the Snake Men. His is deep green, like his helmet and boots, and it looks fantastic. I'm really excited to eventually get King Hiss in the line. 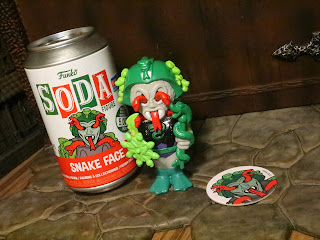 Snake Face is definitely an impressive Vinyl SODA release with lots of detail, great sculpting, and a very impressive design. He's another Epic Vinyl SODA release. I love that Snake Faces has gotten some love lately as he just doesn't often make the cut in most MOTU lines. He's a great C-list MOTU characters and another excellent addition to the line. I've got two more Vinyl SODA figures lined up for tomorrow. Who could they be? I think I've already given away that one is Tung Lashor but who is the other? Check back soon to find out...