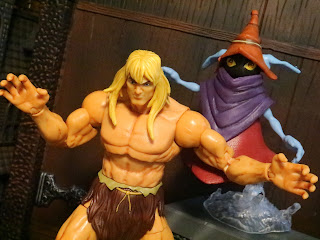 Merry Christmas Eve! How about a big guy and his little helper to kick things off?
OK, so this isn't exactly what you probably had in mind but I'm pretty excited to be checking out this set so soon after its release. One of the biggest surprises of Masters of the Universe: Revelation part 2 was Adam calling on the Power of Grayskull without the Power Sword and turning into the Savage He-Man, a version of the character that hearkens back to the earliest minicomic where He-Man is a loincloth clad warrior who comes out of the jungle. In the bios for Masters of the Universe Classics, a line that used the idea of multiple He-Man/ guardians of the Power Sword throughout history, this incarnation of the character was called Oo-Lar. Here, though, he's simply Savage He-Man. I'll admit that I didn't love the completely wild and unhinged way Revelation depicted Savage He-Man but I do like the concept (I would have probably toned things down a bit, making him more Tarzan and less a dark and gritty Mr. Peepers). I'm also thrilled Mattel got him out so quickly. The figure is quite a bit smaller and now as crazy as in the show but I'm actually kind of OK with this as it simply makes for a great Oo-Lar/ Jungle He-Man/ Savage He-Man. I'm also loving the inclusion of Orko who was an amazing part of the show, even going toe to toe with Scare Glow. Orko, you are the man and are worthy of all of our love and respect! Let's check out this great set after the break... 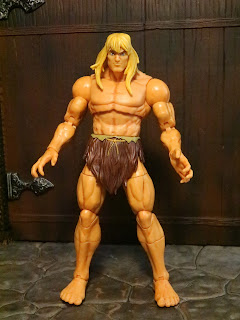 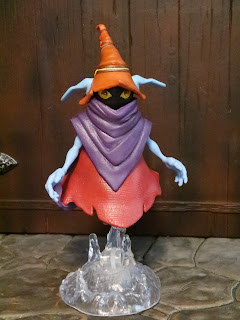 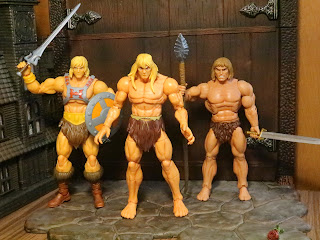 * Here's a quick shot of Savage He-Man (center) with the standard Masterverse He-Man (left) and the MOTUC Oo-Lar (right). 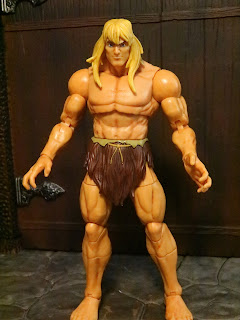 * While he's not really any larger than the standard He-Man, Savage He-Man definitely looks way more vicious and barbaric. This variant really lets the great work on the sculpting be in full view, particularly because of the way Mattel highlighted the muscle tone and definition with paint applications. Amazing stuff here. There are a lot of new parts (lower legs and feet and different hands) and the primitive looking loin cloth really seals the deal. 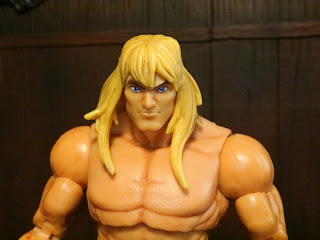 * While the expression isn't perfect for the Savage He-Man from the show it's not bad and definitely makes for a great Jungle He-Man/ Oo-Lar. I really do like it, especially the hint of a scowl or snarl that's just starting to come to his lips. 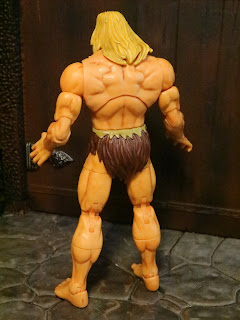 * Here's a shot of the back of the figure to show off the way Mattel highlighted the muscles on this guy. He could have been a very plain figure but those paint highlights really make him quite visually interesting and give him a unique look from the standard He-Man. 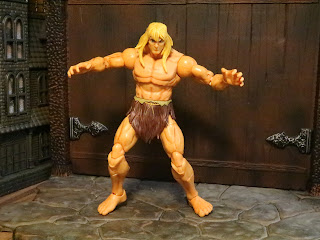 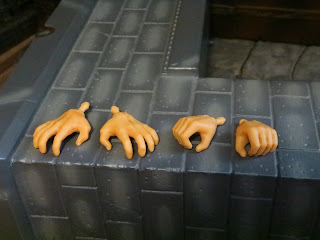 * Savage He-Man comes with two sets of hands: Open palmed hands that look great for tearing apart Evil Warriors (or anyone, really) and standard grips for holding the included accessories. They swap easily so no problems here. 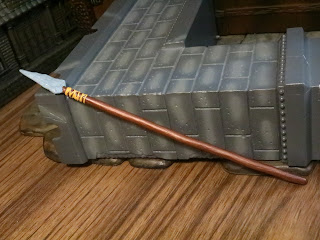 * While in the show he just screams, snarls, and tears things in two with his bare hands, the action figure comes with some great weapons that allow you to use this as a classic Jungle He-Man. First up is the spear he carries out of the jungle in the vintage minicomic "He-Man and the Power Sword." It's a great accessory that has a stone topped spear head and some fairly sharp paint apps for the cords holding the tip in place. 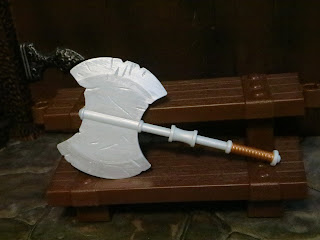 * I'm very partial to this wild looking axe, though. this is the classic prototype/ minicomic axe but it's been more given a more battered and weathered look. Imagine Savage He-Man dicing up some Skelcons with this baby! 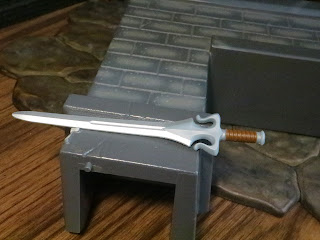 * Mattel also through in a standard Power Sword. While  Savage He-Man doesn't use it in the show (that's why he's Savage He-Man, after all) it is a nicely sculpted and painted weapon and a fun extra. 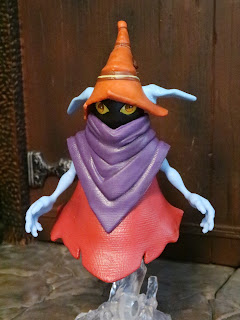 * Interestingly, this set isn't called Savage He-Man and Orko. It's just called Savage He-Man and there's a little blurb on the bottom of the package that says "With Orko!" So Orko is kind of an accessory here which is pretty impressive. He's a fully sculpted figure which captures Orko in his post death of He-Man and Skeletor/ "Modern" look, as the character guides call it. He's got a more tattered looking outfit, a longer purple scarf (which is a separate piece), and short sleeves. There's a nice texture on the different parts of his outfit. 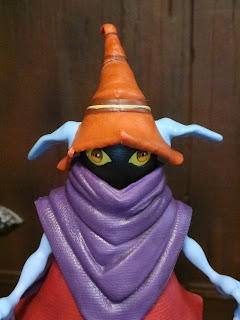 * Orko's head is just flat and round but the eyes look excellent. They're simply painted on and Mattel did a great job with them. 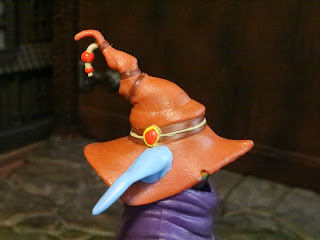 * His hat is pretty cool, too. I like all of the little details on it like the tear on the front, the buckle, and the little ornament hanging off the top. 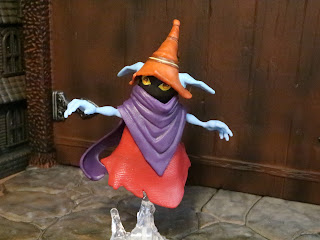 * Orko's articulation is simple but it works. He's got a balljointed head and swivel/ hinge shoulders so you can definitely get some cool poses out of him. It's simple but works well. 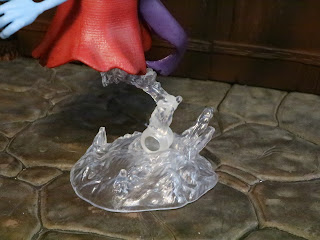 * Orko comes permanently mounted on a clear plastic stand that looks like a magical effect. The bar that holds him up has a swivel hinge joint at the base of the arm and at the top where it connects to Orko, so you've got the ability to put him in some fun flying poses. 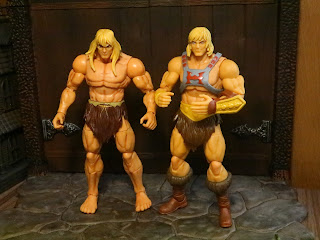 The Negatives:
* My only complaint is that since Savage He-Man uses the same body as the standard He-Man, he's really not any larger and certainly not massive like he is in the show. I'm kind of OK since he makes for a great standard Jungle He-Man/ Oo-Lar, but it would have been cool to actually have the larger wild He-Man, too. 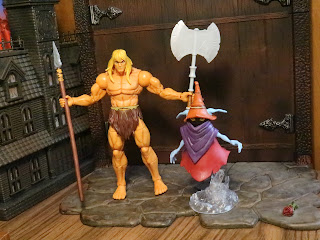 You know what? I love this set. Orko was amazing in Revelation and so it's pretty awesome to get a really good version of him (he's always one of my favorites) included with a really well done Savage He-Man. He's not a perfect match for the show but on his own he's a fantastic update of the original He-Man/ Jungle He-Man/ Oo-Lar and a really fun figure with killer accessories. This set was announced and release quite close together and it made a wonderful pre-Christmas surprise. It's an Epic set and well worth the deluxe price due to the inclusion of Orko. Great job on this one, Mattel.
I've reviewed so many versions of He-Man (Oo-Lar included) that he has his own review archive. Check out Fabulous Secret Powers for all of my He-Man reviews.
If you're an Orko fan I've also reviewed the MOTU Origins Orko, Super7's vintage styled Orko and Shadow Orko, Sideshow's exclusive Orko statue, the green Orko M.U.S.C.L.E. minifigure from the #1 Masters of the Universe set by Super7, The Loyal Subjects Orko, the Orko pin from the GameStop Funko Masters of the Universe box, the Orko POP! + Pez dispenser, the POP! Orko #566, the Dorbz Orko, the Pint Size Heroes Orko, the Geeki Tikis Orko mug, the Micro Collection Orko, the Monogram International Orko figural bag clip, the standard Orko ReAction figure, and the boxed ReAction Orko (Cartoon Colors).
For more Masterverse reviews check out the following:
Andra
Battle Cat
Beast Man
Evil-Lyn
Faker
Fisto
He-Man
Man-At-Arms
Moss Man
Scareglow (Mattel Creations)
Skelegod
Skeletor
Spikor
Teela