Action Figure Review: Mosquitor from Masters of the Universe Origins by Mattel 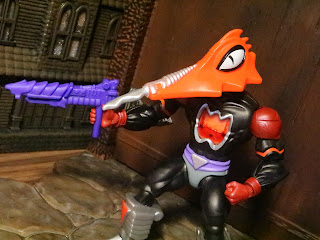 Masters of the Universe Origins has been a very strong line in 2021 and some of the best releases have been the deluxe figures. For only about $5 dollar more the deluxe releases have included alternate heads and hands, more weapons and/ or energy effects, and working action features. You get quite a bit of bang for you buck with these guys. Today I'm very excited to check out the newest of the deluxe figures: Mosquitor, the "Evil Energy-draining Insectoid." Mosquitor is a Kribleen insectoid vampire who has allied with the Evil Horde. Released in 1987, Mosquitor was one of the last figures in the line. Since I'm on the younger side of MOTU collectors and was just getting into the line around 1986 and 1987 I actually remember purchasing this guy and he's one of the vintage characters I still have from childhood. Of course, the Origins Mosquitor is a slightly more modern redo that feels very similar to the vintage figure, though with the updated modern articulation. Let's check out Mosquitor after the break... 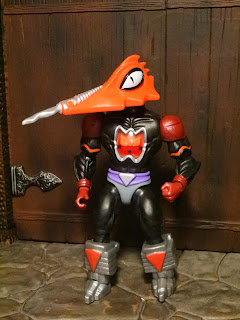 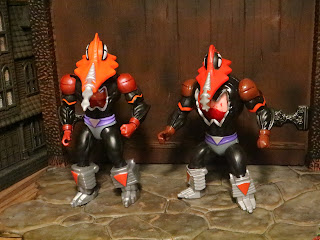 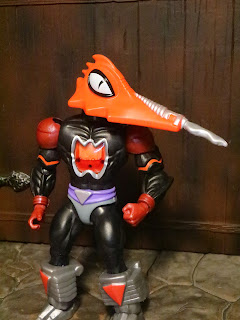 The Positives:
* Mosquitor is looking good hear. He's sleek and decked out in black with red, silver, and purple highlights. He's a very unique looking figure in this line, especially considering most other figures share so many parts. His boots are really cool as are the details on his arms. He still looks humanoid but with some insectoid design elements. 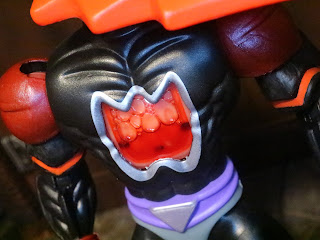 * Technically Mosquitor is supposed to drain energy from his opponents but in most printed material and such his ability is listed as draining energy. Of course, it sure looks like he has a chest cavity filled with blood. Like the vintage figure there is a button on the back of Mosquitor that, when pressed, causes the red liquid in his visible chest cavity to bubble up and drip down. It's pretty cool and as fun now as it was when I was a kid. I love how creepy the blood, I mean "energy," looks! 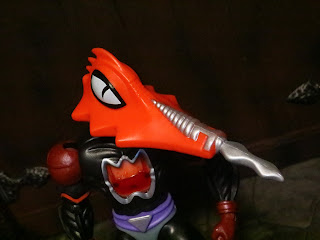 * Mosquitor comes with two separate portraits, the first of which is his vintage inspired head. It looks both insect-like and mechanical, capturing that blend of organic and technology that is intrinsic to so any Horde designs. His eyes really stand out and the head itself has a great range of motion thanks to the barbell styled joint. 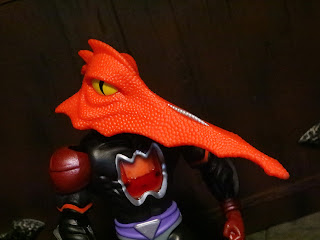 * The second portrait is based on Mosquitor's appearance in Marvel's Star Comics MOTU series. I actually had to look for the source on this one. It's a fantastic headsculpt with a much more organic feel to it. Those yellow eyes and that odd texture are really creepy! 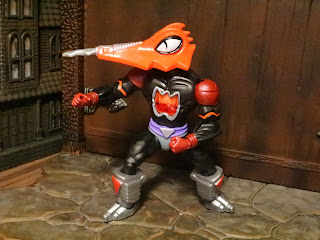 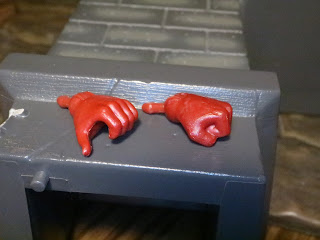 * Mosquitor comes with two swappable left hands: A fist and a standard grip. They swap easy enough and give you some options when posing this guy. 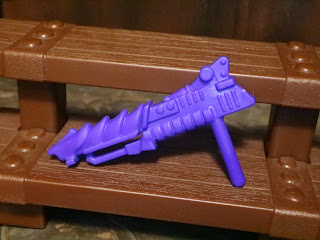 * Mosquitor of course comes with his classic purple laser gun. It looks almost identical to the vintage accessory and has a lot of nice sculpted detail on it. 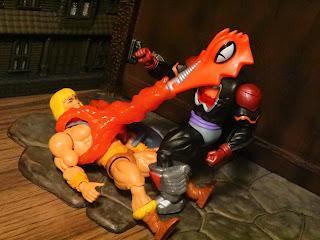 * The coolest accessory included with the figure is this energy effect. It fits over Mosquitor's needle nose and then can wrap around the torso of another figure to look like lots of blood, err..., I mean energy, is being sucked out of them. This is the coolest thing ever and I think the MOTU Origins team deserves some serious praise for including such an awesome accessory with Mosquitor. 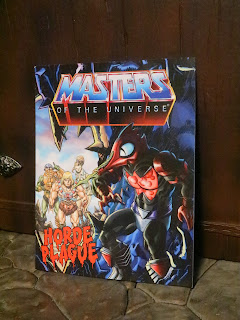 * Mosquitor comes packaged with the same minicomic that "Buzz-Saw" Hordak came with. It's a decent little minicomic that's a fun extra and would help any kids picking these up to learn a little something about the characters. 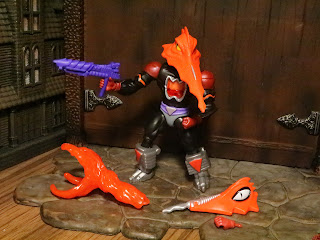 Mosquitor is an incredible release and quite possibly the best MOTU Origins figure yet. He's pretty impressive and packaged with some extras that really do make for a figure that feels very deluxe. Mosquitor is just a cool design on his own but when you throw in the two headsculpts, the blood pumping action feature, and the energy sucking effect he's definitely a figure that stands out. If every Origins release were this good I wouldn't mind of the line focused on just "deluxe" figures going forward. The extra parts are well worth the price. Mosquitor is Epic and one of the best figures I've picked up this year.
If you're a fan of Mosquitor then check out my review of the Funko POP! Mosquitor #996.
For more Masters of the Universe Origins reviews check out the following:
Battle Armor He-Man
Battle Armor Skeletor
Battle Cat
Battlefield Warriors
Beast Man
"Buzz Saw" Hordak
Castle Grayskull
Clamp Champ
The Evil Horde
Evil-Lyn
Evil-Lyn (200x)
Faker
Fisto
He-Man
He-Man and Prince Adam 2-Pack
Hordak
Land Shark
Lords of Power
Man-At-Arms
Man-E-Faces
Maniacal Mimics
Mer-Man
Mer-Man (Lords of Power)
Mysteries of Grayskull
Ninjor
Orko
Panthor
Panthor (Flocked)
Prince Adam & Sky Sled
Ram Man
Rise of Evil
Roboto
Scare Glow
She-Ra
She-Ra (PowerCon Exclusive)
Skeletor
Stratos
Teela
Trap Jaw
Tri-Klops
Tri-Klops ("The Terror of Tri-Klops!")
Wind Raider
Zodac
Posted by Barbecue17 at 12/08/2021