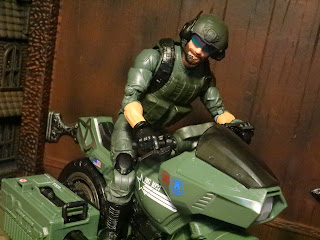 October, November, and December were crazy months for action figures this year and I'm woefully behind. Like usual, January is going to be my wrap up month but before the end of 2021 I want to get around to checking out the last few figures from Hasbro's G.I. Joe: Classified Series, which is one of my favorite lines currently out there. The Alley Viper and B.A.T. are actually showing up in stores right now but I haven't managed to get my hands on them yet. Still, I've got lots of new cool stuff to show off, starting with Alvin "Breaker" Kibbey with the RAM Cycle, a Target Special Mission: Cobra Island exclusive figure and vehicle set. Over the last year there has been an interesting in the Classified Series with figures looking less futuristic like the earlier figures in the line and instead looking more like updated versions of the vintage figures. Breaker definitely seems more like an update of the vintage toy (he was one of the Original 13, after all) and while he's "modern" he doesn't have that many futuristic flourishes. In fact, he's rather plain. I managed to walk into a Target back in October and stumble upon this guy which was a real treat. Let's take a look at Alvin "Breaker" Kibbey and the RAM Cycle after the break... 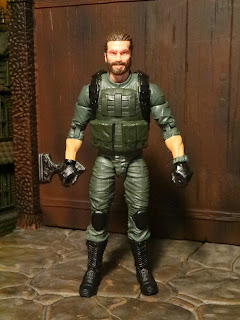 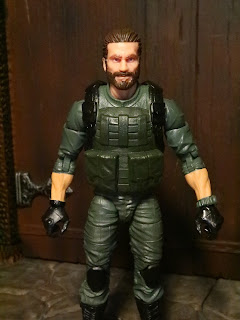 The Positives:
* So far in the line I believe Breaker has the most traditional military look of any figure. He's quite simple, clad in green fatigues and a padded vest with lots of pouches. There's a little bit of reuse here (the arms from Duke, the legs from Snake Eyes) but the boots, torso, and vest seem to be all new. The paint work is neat and clean though there are minimal details on Breaker's outfit. 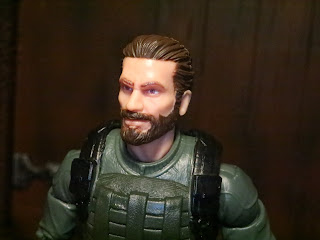 * Breaker has an excellent headsculpt that captures the full bear of the vintage toy. I've seen lots of comments that Breaker bears resemblance to both and Bradley Cooper and Jake Gyllenhaal and I'm kind of seeing it, especially Bradley Cooper, but I don't think anyone would pick this up and immediately think it's Bradley Cooper. Breaker is his own guy and the communications officer from Gatlinburg, Tennessee (one of my favorite places) definitely has a unique look with fantastic detail in his hair and beard. 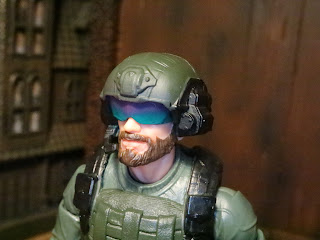 * He also has a great helmet. It's an armored helmet with a fantastic looking visor and lots of gear built into it. The tech piece that wraps around the helmet looks a lot like the headset from the vintage Breaker but it surely has lots of other goodies built in. 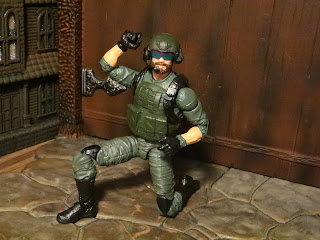 *  Breaker has the standard excellent articulation for this line, . He's as articulated as the best Star Wars: The Black Series figures. Heck, maybe even a bit more! Besides the stuff like a balljointed neck base and the butterfly hinged pectorals, Breaker also has vertical hinges in his hips that go up and down on the pegs connecting to the balljointed hips. This guy truly makes the classic Joes, the ARAH Joes, and the modern 1/18th scale Joes proud with his articulation. 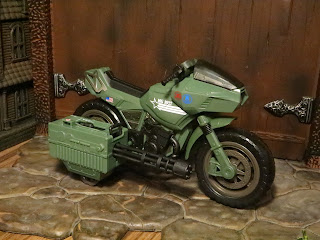 * The RAM Cycle is also from the original 1982 series of G.I. Joe figures and like that vintage piece this is still a simple motorcycle with a detachable gatling gun sidecar. It's solid green and still looks modern but not overly futuristic. It's also less toyish looking than last year's Cobra COIL, which is a nice touch. 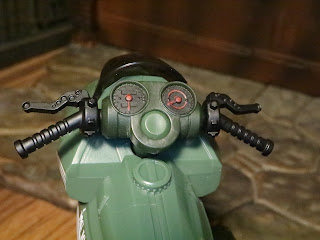 * The handlebars have some nicely detailed instruments on them and the handlebars are on balljoints to allow for some flexibility when posing a figure on the bike. 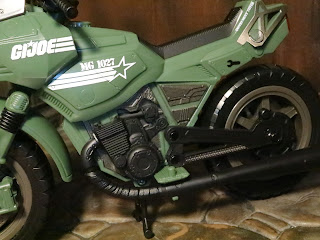 * There's a lot of nice detail on the sides of the bike. There's more detail here than I expected and some nice labels such as the G.I. Joe logo and the little label for where the tool box is stores. 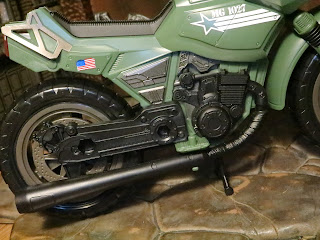 * On the other side you've also got an American flag which is a fantastic touch. There is also a functioning support stand for the bike that folds down. 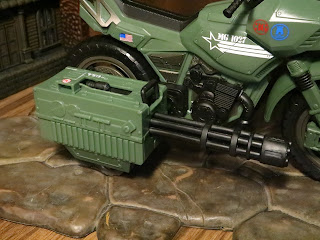 * The gatling cannon is housed inside this attachable "sidecar" with a rolling wheel. It fits on the right side of the RAM and allows the vehicle to deliver some needed firepower into the field. 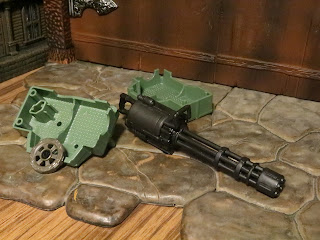 * The sidecar housing can disassemble and inside you'll find the same weapon that Heavy Artillery Roadblock came with but this time molded in black instead of green. This is the only weapon that Breaker comes with in the set so I guess he has to break it out sometimes. 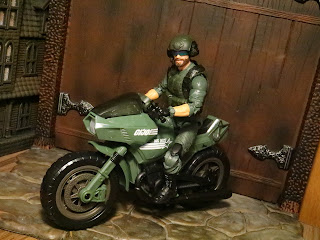 * Breaker fits perfectly on the motorcycle. There are footrests to plug his feet into and he looks great mounted on the RAM. 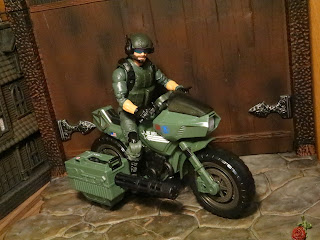 For the price this is a Great set and I like the RAM cycle more than I thought I would. Breaker is a decent figure but I'm rather disappointed that he doesn't come with any gear other than his helmet. No sidearm? No knife? Nothing. That's kind of disappointing, especially considering how geared up everyone else in this series has been. Still, it is a nice looking set and while I really don't want to see large vehicles in this series the RAM Cycle is the perfect size for the 6 inch scaled collectors line. Breaker could have been better, though, so I'll have to arm him up with some extra gear from elsewhere.